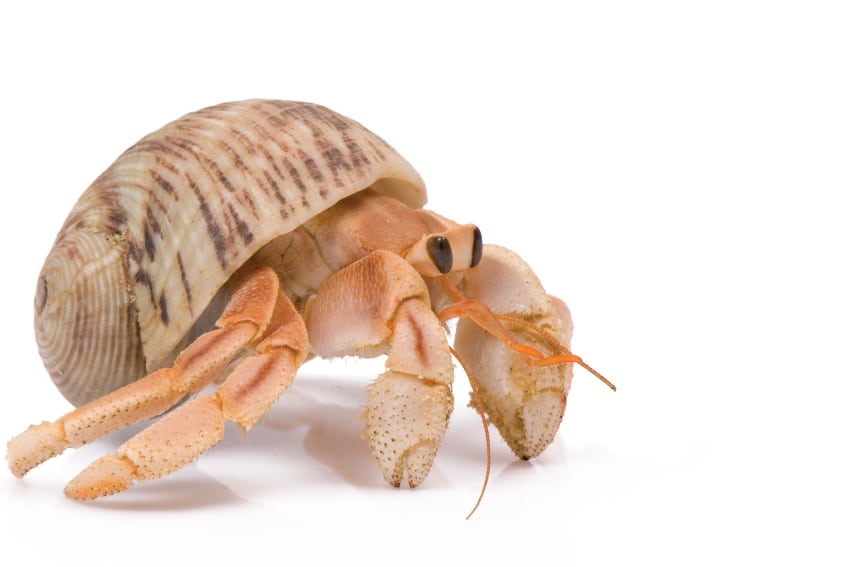 Of the five hundred different species of hermit crabs, most of them live in the ocean.  However, the rest of them exist on land.  Land hermit crabs are the type most often kept as pets. Because they all breed in the ocean, they can not be bred in captivity. So all of the land hermit crabs you see as pets have been caught from the wild. They are rather easy to care for once you know a few basic facts about them, and they certainly make interesting, albeit unusual, pets.  Each land hermit crab has its own little personality, completely unique to it.  It is certain to be a curious, very active little creature, making land hermit crabs extremely fun to take care of and even to simply watch.

Hermit crabs have soft, small bodies, so they protect themselves by taking up residence in unoccupied snail shells.  As they get older and grow bigger, they naturally have to start looking for bigger shells.  Thus if you own one of these creatures, or want to get one, then another vital thing you need to know about land hermit crabs is to always make sure they have a bigger shell into which they can move. Like oceanic hermit crabs, land hermit crabs are omnivores.  Another thing many people do not realize about land hermit crabs is that their diet is very much like the one eaten by humans  the healthy version, of course.  They need to have plenty of carotene, calcium, and antioxidants.  Thus, feeding them lean meats, fish, vegetables, and fruits are all good ideas.  Land hermit crabs also like tannin, so you can also feed them oak leaves and tree bark. There are also several things you need to know about land hermit crabs when it comes to picking out the right one as a pet.  You can find these crabs in just about any pet store, so that is the easy part.  You do want to be careful when choosing which land hermit crab, or crabs, you want to bring home with you.  Crabs do re-grow missing legs and claws so that isnt too important when picking one out. You do want to make sure that any of the land hermit crabs you pick out are active and lively.  Furthermore, if you already have one crab and are buying another, try to make sure you pick one that is about the same size as the one you already have.  If you do not, then there may be some fights in the works. Hermit crabs like company- its best to have 2 or more crabs.