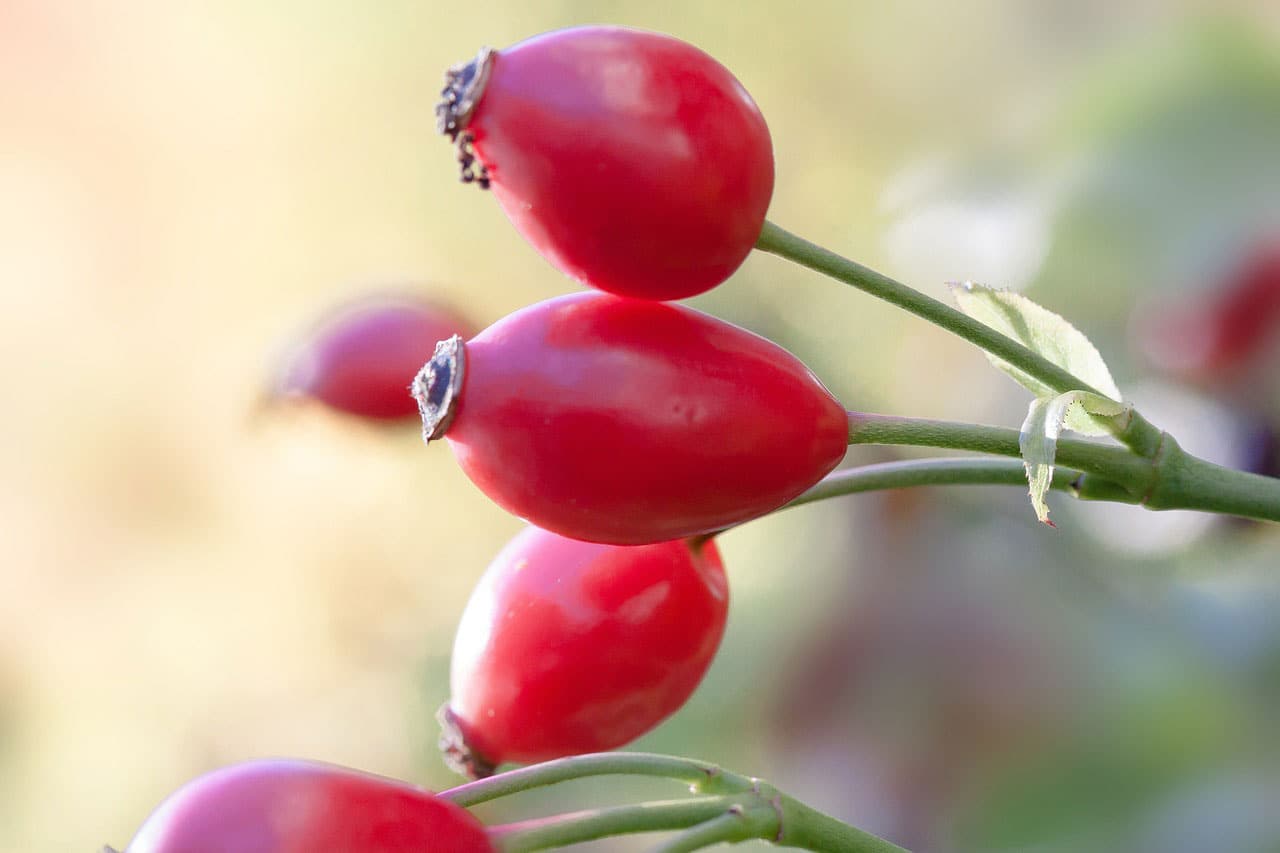 The Rose Hip is a fruit developing on the rose plant that belongs to the Rosaceae family. Usually it is found in deep orange to red color, but in some species, it is also found in deep purple to black shade. During the early summer or spring, the flowers get pollinated, after which this fruit begins to emerge. It ripens during the end of summer till the autumn. The other used terms for Rose hip are Rose Haw or Rose Hep.  It is one of the best sources of vitamin C.

For centuries, the benefits of Rose Hip have been popular. It was used in traditional Chinese medicines and also among the Romans. Pliny, the Roman diarist claimed in 77 AD, about the medicinal effects of various Roses that can heal around 32 types of ailments. Chinese Herbalists used this fruit to cure digestive problems, whereas some Native Americans used it to cure muscle cramps.

The Rose Hips are the edible fruit seen just below the blossoms. It is generally found in reddish-orange shade and sometimes in purplish black color in some species. It ripens during the winter period. It is a fleshy and a shrunken fruit with oblong shape. It consists of 3 or more seeds that are yellowish brown in color.

The natural habitat of wild roses in which Rose Hips grows is North Africa, Europe and some areas of Asia where there are moist and shady regions. It is also seen in the evergreen forests present in the North West Pacific regions.

The Roses thrive well in nutrient and organic rich soil. It also demands a well drained soil. It will not thrive well in shady areas and cannot adjust in wet soil. Providing with enough mulch layer and organic or vegetable compost will be beneficial for the growth of the plant. Soil conditioners available in markets or pine bark are also beneficial to give the plant a good start. The preferable pH value of the soil for Rose plant is 6 to 6.5.

The Rose hip plant can be propagated by the seeds formed in the Rose Hips. The easy way to germinate the seeds soon is by soaking the seeds in hydrogen peroxide solution for at least 1 hour. Then the seeds should be stratified by keeping it in cold temperature or refrigerator for several weeks. Once sprouted, the seeds should be sown in the soil at least 6mm deep. It will take around 1 week for the sprouted seeds to turn into a seedling. Maintain a temperature of about 16 to 21 degree Celsius for a steady growth along with 6 hours or more sunlight. After it grows more sets of leaves, then it can be transplanted to a good and sunny location.

The Rose hip plant requires damp soil but not soggy. Watering regularly is essential, but the soil should be well drained. Transplanting the plant should be followed by thorough watering. Once grown, then normal watering is sufficient.

The Rose Hip plant requires fewer temperatures. Germination of seeds takes place only in a cold temperature. Even after the establishment of the seeds, a temperature of 60 to 70 degree F or 16 to 21 degree Celsius should be maintained. It requires a 6 hours of sunlight every day for the better growth.

The plant should be kept in a warm and moist soil. The established plants should be watered normally. Providing with a good fertilizer during the warm season will be beneficial for the plant, especially for the growth of flowers. This plant should not be pruned during the month of September.

The Rose hip herb is affected by many pests and diseases like Rose Rust, Rose Black Spot and Fungal Diseases. This fungal disease can be prevented with the use of a good fungicidal spray.

Rose hips were used since ancient times for their medicinal and culinary properties. It is a great source of vitamin C and hence can be used to cure flu, cold and vitamin C deficiency. It is also effective to cure stomach related disorders like stomach irritation, pain, spasms, ulcers, constipation and stomach acid deficiency. It is a good remedy for curing diarrhea, gallstones, diabetes, leg pain, cholesterol, weight loss, kidney disorders, high blood pressure and many more.
In culinary use, it is used to make jelly, jam, Rose Hip Syrup, beverages, wine, pies and herbal teas. It is also edible, and you can eat it directly, but many chefs prefer using it boiled.