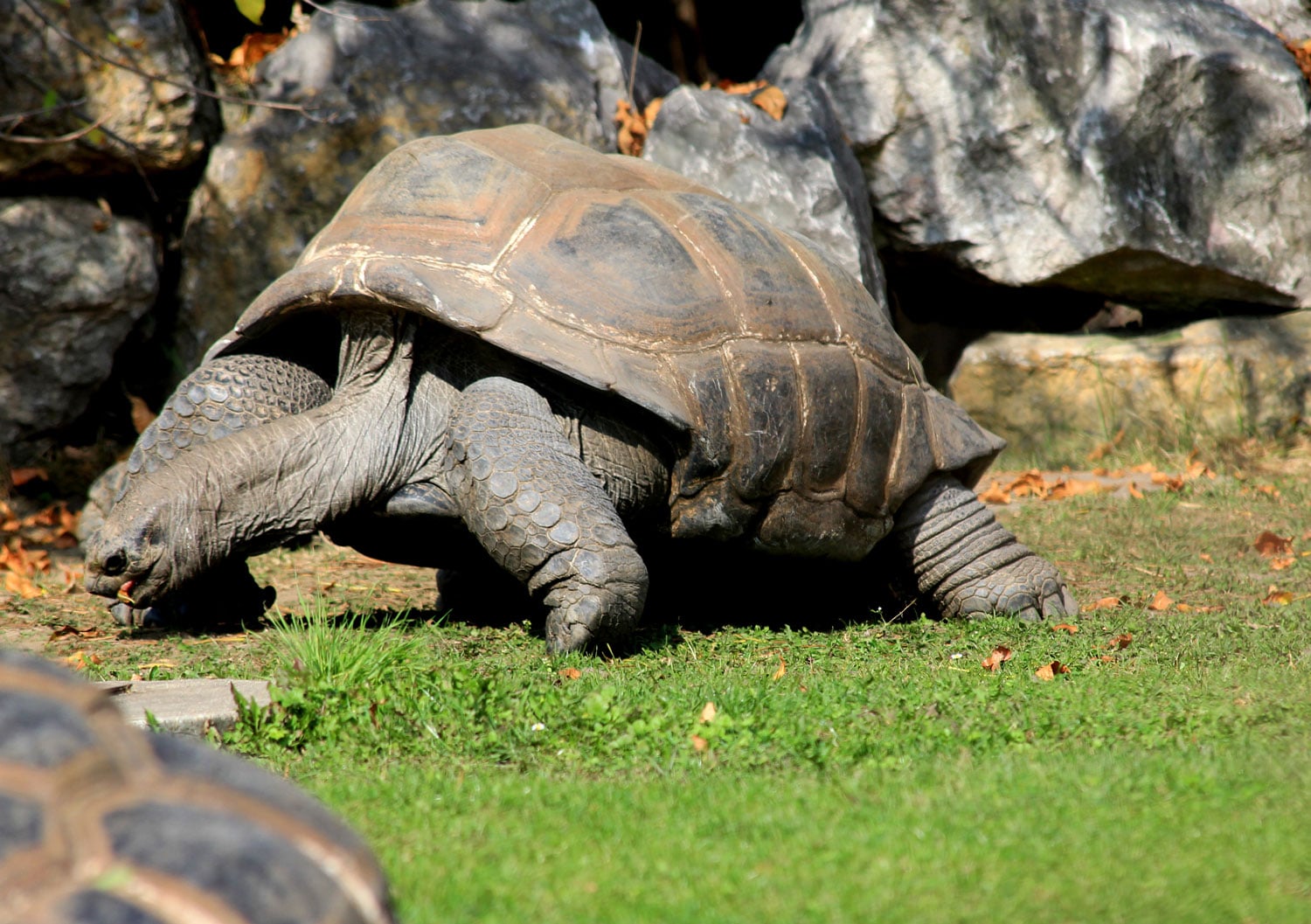 The Galápagos tortoise or Galápagos giant tortoise (Chelonoidis nigra) is the largest living species of tortoise and the 13th-heaviest living reptile, reaching weights of over 400 kg (880 lb) and lengths of over 1.8 meters (5.9 ft). With life spans in the wild of over 100 years, it is one of the longest-lived vertebrates. A captive individual lived at least 170 years. They  are the giant tortoise of the world.

The moderate weights of the females are around 250 pounds (113 Kg.) and that of the males is 500 pounds (227 Kg.) Their legs are stout and strong enough to bear the weight of their body, still most of the time they keep lying down, to preserve their energy. The Galapagos tortoise is of two varieties, The smaller ones possess shells which curl out in front just like a saddle and hence called “saddlebacks, while the largest ones sporting  large, round shells, they call, “domes.”- The carapace (shell) of the tortoise is big and bony, colored dull brown. The shell plates merge into the ribs,  forming a strong protection and become a part of the skeleton. Lichens live in the shell of these gradual-moving animals. These tortoises have  typical scutes (shell segment) design on their shell which they retain  throughout  their life. The superficial layer fades off with time, and so, even though every year,  bands grow on the shell,  it is not useful to determine the age of the tortoise. As a protective device, it is possible for the tortoise to pull in its neck, head and forelimbs into the shell. Their legs are short and big, having hard scales and scaly dry skin. It has four claws on the hind legs and five on the forelegs.

Galapagos tortoises live a simple life, basking in sun, grazing on cactus, leaves and grass and having a nap for about 16 hours daily. They are capable to starve for a  period of one year on account of the gradual metabolism and large resource of water.

The Galapagos tortoise is a sluggish, passive, silent and harmless animal. They wake at dawn for basking in the sun till then the massive body is warm enough.

The Galapagos tortoises originate from the seven Galapagos Islands, located in a volcanic archipelago nearly 1000 km (620 miles) westward of Ecuador’s Mainland.  In the 16th century, the Spanish explorers discovered the seven islands and gave them the name, “Galapago” which means tortoise in the Spanish. For copulation the males subdue the females by putting their weight on them and arresting their movement. Breeding time is from January to June. They lay 2 – 20 eggs of approximately the size of a tennis ball. Further,  the female covers the nest and leaves the eggs for incubation for a period of 4-8 months. The sex of the offspring and temperature is the criteria that dictate the incubation time. Lower temperature seems to account for more males. The hatchlings emerge during the month from November to April. These herbivorous tortoises feed on fruits, leaves, cactus, vines and grasses. They have earned the name, “eating machines” because of the large quantity of food that they consume. They are capable of starving without food and water for a period of one year since they are capable of storing water and food for a pretty long time. These tortoises create water by splitting their body fat.