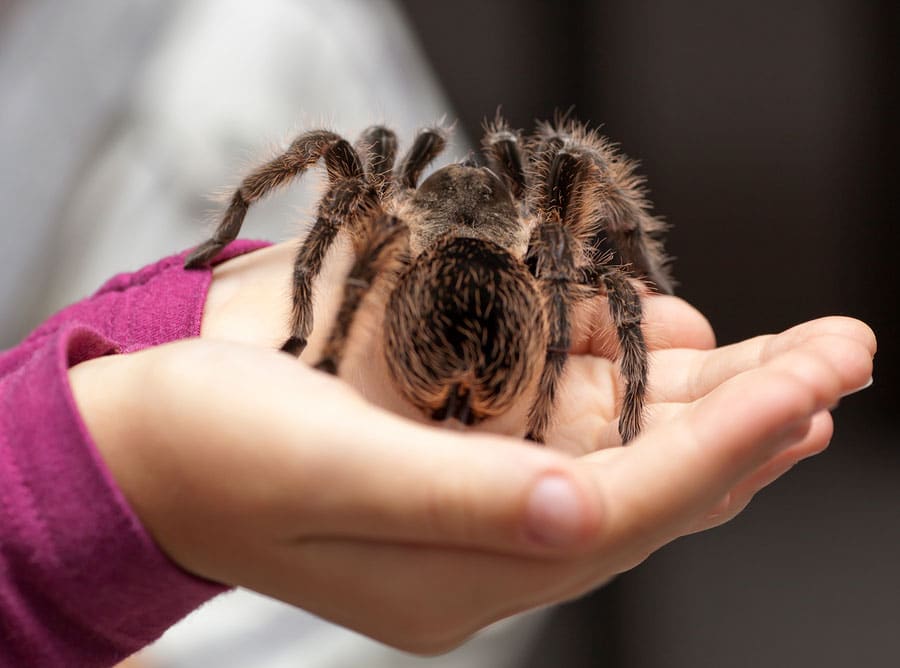 Tarantulas are without doubt, the most popular pets of people living in the US. The reasons for their popularity are not difficult to guess. For one, they are easy to maintain, have friendly character and are available easily. It is normal for many to have pets just to impress their visitors but tarantulas make an awesome sight. These are the largest spiders that we have in the present world. They really exhibit a remarkable variety of appearance, habits and habitats. Goliath bird eaters constitute the largest species, whereas hairs of varying colors cover the bodies of a large variety. Many species, like the well-liked Mexican Red Knee Brachypelma smithi, have symmetrically arranged bands in orange, red and yellow colors. Other attractive verities such as the ornamental Poecilotheria or the tiger rump Cyclosternum fasciatum are distinguishable by different patterns of lines on their exteriors.

Large pet stores have sold some species of tarantulas, of which the Mexican Red Knee is the most popular. Some stores do sell other species like the Rose Hairs, but not as frequently as in the past. The best sources for buying these are online stores or hobbyists, though it will be difficult to assess the health of the arachnid, online. At birth, the tarantula’s abdomen would ideally be plump. A newly molted tarantula would be normally thinner, and not fit for transportation for at least a couple of weeks after a molt. You can classify tarantulas into two main categories: arboreal and terrestrial.  Many species may fall in between these two varieties, but for this discussion, these two will suffice. You should orient the tanks for the terrestrial variety horizontally, while employing cages for housing the other arboreal varieties. You need taller cages for them, rather than being wider or longer. This facilitates the natural inclination of the spiders to climb up and set down fat layers of the web.

The size of the tank is very important. Too large a cage makes it difficult for the tarantula to contact its prey, while too short a cage may pose problems for proper molting. The floor of terrestrial tarantulas should have a size of three times the length of their leg span. In case of arboreal or tree-climbing species, the same size is applicable vertically.

A proper cage should have sufficient substrate. A minimum substrate should consist of at least 3 inches for the terrestrial species. The deeper it is, these spiders like it better, but you will find it more difficult to see your pets, as they will go deep underground. For this reason, hobbyists use thinner substrates to keep their pets in sight. It is a good idea to provide some cork bark or hollow bark to provide your pets with a hideaway. However, make sure you firmly ground them so that they will not collapse and pin your pet under it. Also, remember to keep a water dish especially for the terrestrial species that you hold in glass terrariums with a heater below to maintain the temperature. Dehydration is an eventuality in tarantulas that you must guard carefully against.

The tarantulas are mostly unpredictable and aggressive and you should take care when inserting your hand too many times in the cage, an act that these spiders can misinterpret.

As the tarantula grows, you can feed it small crickets or roaches. If you find it is not feeding for quite a few days, it may mean that the arachnid is ready to molt, getting rid of its existing exoskeleton. At this time, make it a point to remove the feeder insects that could stress out the tarantula.

The mating process in captive tarantulas is a matter of chance. When you introduce a healthy, mature male into the cage of the female, it will do its best to seduce the female out of burrow by tapping its forelegs near the entrance to the burrow. Three possibilities can result from this. The female may not show interest or it will eat the male or, if you are lucky, they will mate. Sometimes all may go well but the female will not produce an egg sac. Alternatively, she may molt, necessitating a re-fertilization or she may consume her egg sac.

Hobbyists, never despair! Everything depends on chance; and one day you will taste success in your efforts to breed your tarantulas in captivity.