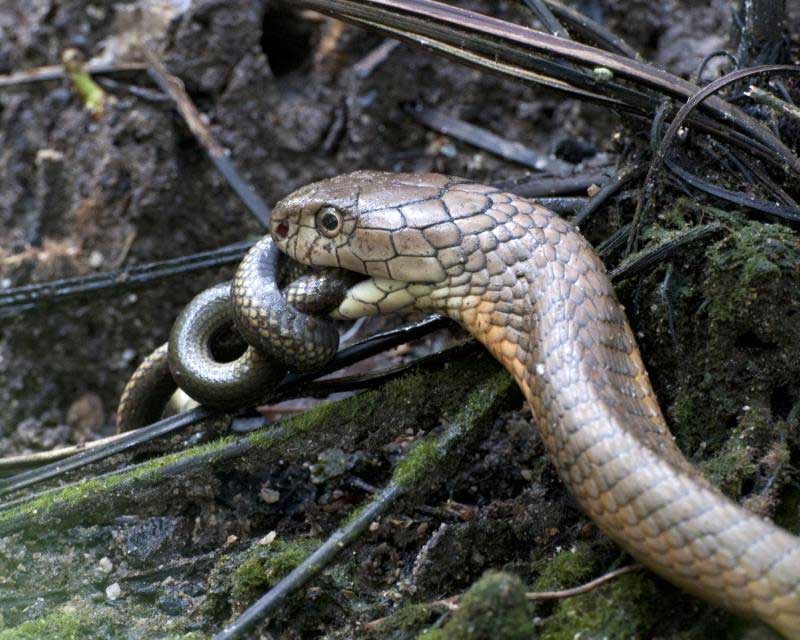 Ophiophagy is the term used to describe a specialized feeding (alimentary) behavior  of birds and animals which are in the habit of hunting and eating the snakes. There are quite a number of animals that are ophiophagus.  They include Skunks, Mongooses and humans (only some) among the mammals. The ophiophagus  birds are Snake eagles, some hawks and the Secretary birds.  Some   lizards like the collared Lizard and some snake species like Mussuranas of Central and South America as well as the Common Kingsnake of North America cannibalize their own kind. The genus of  (Ophiophagus Hannah)  the venomous snake King Cobra is named after its snake eating habit.

Hawks and eagles do kill and eat snakes.  For many birds of prey, snakes constitute their staple food. Even mammals like foxes and weasels hunt and eat snakes. Big snakes will consume smaller snakes. Even venomous snakes have their share of predators. There is a Mexican  legend about  a snake eating bird. The bird has a place in the Mexican flag. The present day city of Mexico stands on a spot visited by the bird who was sent by God   Huitzilopochtli. The bird depicted on the Mexican Coat of Arms is the Golden Eagle, a confirmed ophiophagus bird. Possibly, the bird could be a Snake hawk (laughing Falconer) that  feeds only on snakes.

The Mayan legend and folklore contains many references to ophiophagy.

The Mayans also had the legend of ophiophagy in their folklore and mythology.

According to Christian folklore, Serpents (snakes) are associated with Evil.  Ophiophagus animals that destroy them are Good.

According to Hindu mythology, Garuda, the vehicle of Lord Vishnu, is the sworn enemy of the Nagas (read as serpents). The Peacock, imagined to be God Subramaniya’s  vehicle, is always pictured with a snake in its beaks or under its claws.

In many regions of the world, people keep Ophiphagos pet animals to keep their environs clear of snakes.  These are common in places where venomous snakes are responsible for the deaths of a number of domestic animals. In India, people keep tamed mongooses for this purpose. A Brazilian plan to breed and release Mussuranas (These are a species belonging to the  Colubrid family of snakes inhabiting  south and central America, from Brazil to Guatemala. They are ophiophagus, meaning they attack and consume other snakes) on a large scale in order to control Pit vipers, did not work out. For centuries people have been keeping peafowl as pets because of their ability to hunt and kill snakes. Most ophiphagus animals appear immune to snake venom, especially of those of the snakes they usually feed on.  The Brazilian scientist, Vital Brazil, studied this phenomenon in Mussuranas.  He found that these animals have anti-neurotoxic and anti-hemorrhagic antibodies in the blood. Opossums of Virginia are found to have the most resistance to snake venom. This immunity is certainly not acquired, but evolved as an adaptation to the presence of venomous predator snakes in their environment.

The highly acclaimed immunity of the mongooses to snake venom is  because of the presence of  AcChoR, a receptor that that does not bind with alpha neurotoxins or alpha BTX.

There are a large number of animals that kill snakes. Wild horses have developed the  technique of stepping on snakes to kill them. Hawks, on the other hand, swoop down on snakes, fly high into the air and drop them to kill them for food While the common predators are the birds of prey, in some locations, other animals are more common predators of snakes. This includes Lemurs and American alligators. The Honey badger, appears to have a high degree of tolerance to snake venom.

It may seem astonishing that the large scary snakes have predators.  They are killed by mammals and birds when they are very young.  They have humans to fear when they grow up.

Humans pose the greatest threats to snakes. Many snake species are captured and sold in the pet shops of other countries. Venomous snakes are caught to make anti venom. They are caught and killed for their valuable skins. In some countries like China, some people eat snakes for potency.

The fast increasing human population has led to the destruction of the habitats of the snakes. The habitats are destroyed due to human development deeds.

Snakes have a number of means to protect themselves. Their coloring provide great camouflage. They burrow under leaves or sand for added protection.  They create a variety of sounds to scare off predators. Some just roll over and play dead. Biting is the last resort for venomous snakes.  In spite of all these escape techniques, their numbers are dwindling, that too, rapidly.