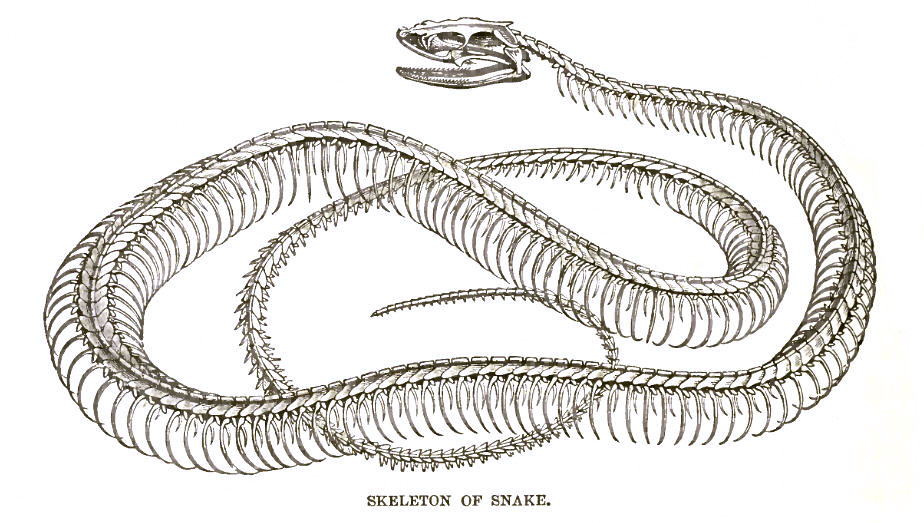 The skeletal formation of a snake is an amazing sight to observe. It is almost as though the entire structure is meticulously put together in an attempt to create an elegant creature. A snake skeleton consists of a skull, the vertebrae and ribs, and the vestigial remnants of the limb. The main structure of a snake’s body is made up of the (1) skull, (2) vertebrae and the (3) ribs. For some snakes like the boas, pythons, they have the vestiges of hind legs or hip bones.

The backbone of the snakes consists of numerous vertebrae that are attached to the ribs. Unlike humans, who have around 24 ribs and 33 vertebrae, snakes have between 100 and 400 vertebrae with many ribs attached to it. This arrangement helps them to move as flexibly as they do. The bone structure is very complex in a snake and they have various joints which enable them to swallow an animal which is almost double their  size. One can divide the types of snakes into 4 groups based on their size of the jaws:

There are over 3000 snake species that one can find around the world. It is a known fact that the giant ones can kill large antelopes, small hippos or kangaroos by squeezing them so that their bones break and then they swallow the entire animal. Poisonous snakes like the King cobras, on the other hand, can kill smaller elephants. There are other species of snakes which do not grow any larger than a pencil. Under circumstances like those in captivity, a snake can live as long as 50 years. The skull of a snake, although, has the bones very loosely attached to each other,  but it completely encloses the brain without much difficulty.

The lower jaws, in many snakes, have two bones that a tissue which is elastic in nature connects at the place where they have their chin area,  and that is the reason why such bones move widely apart from each other.  The lower jaws usually connect very loosely with the upper jaw bones. Several bones of the roof of the mouth, the upper jaw and the skull remain connected.

There are pointed and curved teeth attached to numerous bones on the lower or the upper side that  are not for the purpose of chewing, instead it helps in holding their prey in a suitable position and then allows them to swallow the prey.

Both the sides of the snake’s jaws can be made to move in separation. This very structure helps them to open their mouth as widely as they do and hence they are able to swallow prey almost double their size. In an attempt to be able to swallow a prey, the snake would move the two sides of their lower jaws laterally, and pull back the animal in its mouth. It is those curved teeth that would hold the prey in place which makes it much easier to kill and swallow the entire body of the animal.

The snake’s skeleton is made-up of the skull and the great many teeth. The unique adaptation of their skull would allow them to swallow such large sized prey. Most of the bones in a snake’s body remain connected by an elastic ligament which allows a good chance for it to stretch them as widely as possible. The joints which are located at the upper and the lower jaws are placed far back that is on the posterior side of the skull that enables them with the ability to open their mouth widely. To add to this, experts have observed that the bones in the lower jaws do not really merge with one another  in the front part, which would mean that they are able to move laterally during the time when it is involved in the process of swallowing a very humungous prey. Moreover,  along with all these structures, the snakes also have  loosely attached bones in addition to the others known as the quadrate that appear on both the sides. This  gives them the shape of a  double hinge where their joints are,  and as and when the snake is trying to swallow its prey, it would alternatively move the jaws, coaxing  into  walking the prey into the snake’s mouth. The backward placed teeth are another interesting adaptation as  these are angled towards the part where the throat begins and acts as a hook that prevents any opportunity for the prey to wiggle loose of its predator. Snake teeth are found in both the structure of an acrodont, which means that they are all connected to the bones and also polyphydont, which means that they will grow back if broken. The snakes have several sets of teeth attached to the bones for a lifetime, for the purpose of feeding themselves. The types of teeth differ according to the methods the snakes use to kill and swallow their prey. X-Ray Picture of a Snake

It all depends upon the species, as the snakes can have around 150 to over 400 vertebrae. Very strong and flexible joints that would be connecting the vertebrae that the snakes have,  are the very reason why snakes are able to perform varied number of motion types. A known fact claims that the more the number of bones that a snake would have, the more it will gain in agility.

To each vertebra, there is a pair of ribs attached on the front side of the tail of a snake. The ribs along the belly are not really joined together and can be made to extend outwards, which allows the snake to swallow prey that  are larger than it in size.

Scientists discovered in Cerrejón  in northern Columbia, a fossil of a giant snake that probably lived millions of years ago with skull intact, measuring on an estimate, about 30 to 35 feet in length. That they called the Titanoboa cerrejonensis.