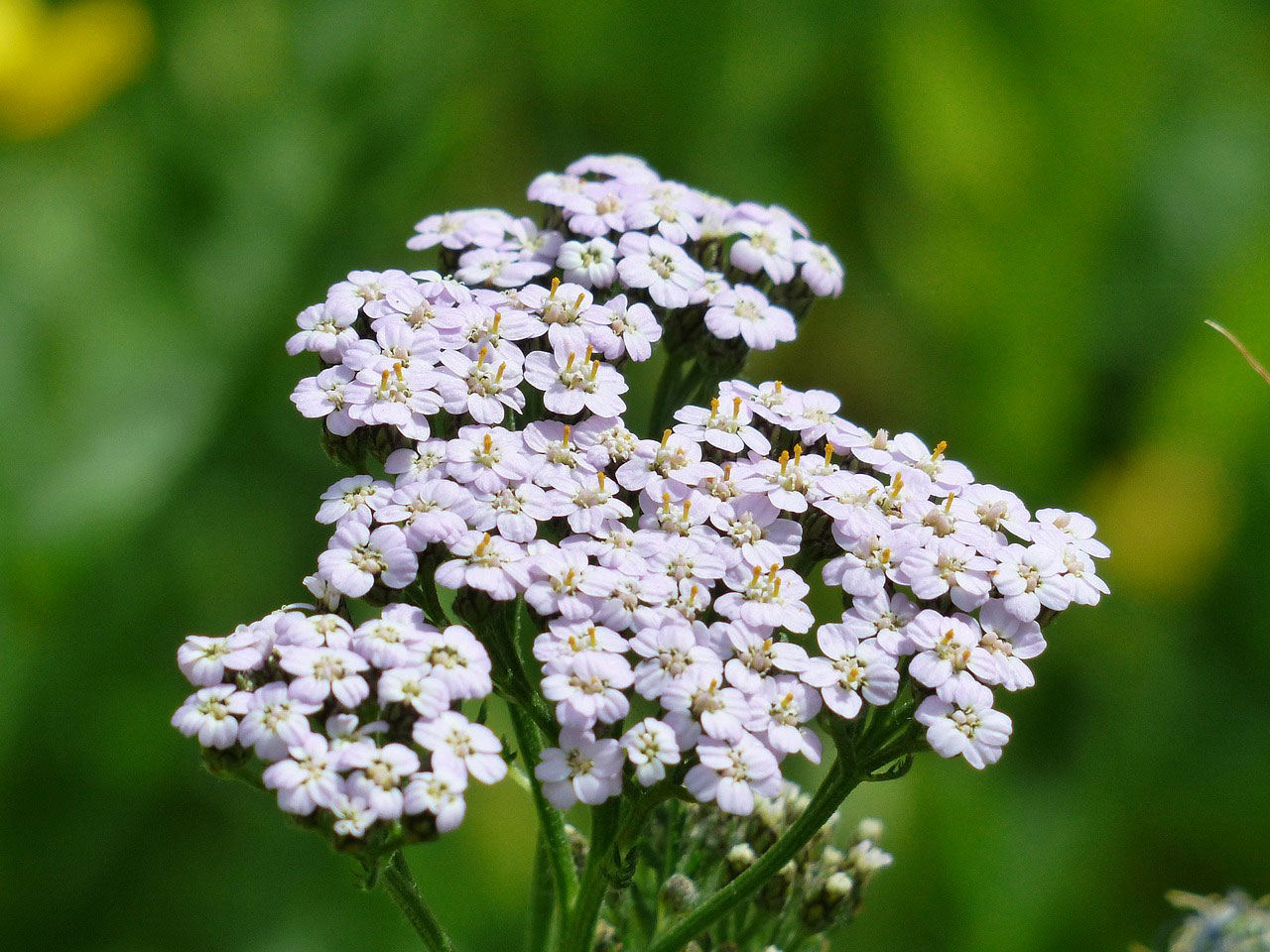 Yarrow is also known as Achille, Achillea Millofolium, Milfoil, Achillea Lanulosa, Blood Wort, Nose Bleed, Thousand Weed and Common Yarrow.  It is a flowering plant and its parts seen above the ground are used in the making medicines. It is an erect, herbaceous perennial, and a valuable medicinal herb used in alternative medicine as a Carminative, Antiseptic, Antispasmodic, Astringent, Daipahoretic and Tonic with much scientific evidence. The main constituents of the yarrow herb are its volatile oils that include camphor, Sabinene and Linalool. This plant helps to open the pores freely and purifies the blood. It has anti inflammatory and diuretic properties, which make it a useful remedy for many diseases. This plant gives a wildflower look to any garden.

The Yarrow plant was used in the Trojan War by Achilles to heal the bleeding wounds of soldiers, and so this herb was named in his honor. It was very popular in European folk medicines because it contains flavonoids, which are plant based chemicals that helps to improve digestion. Since ancient times, its best form has always been the well known “Achillea Millefolium,”which is its Latin name and it is derived from the Greek. For centuries, Yarrow was also used in China and Western Europe as a tool for prediction.  During the middle ages, it was supposed to be capable to assist in calling the devil and also driving him away. It was used in the exorcism rituals of the Christians. An herbal mixture known as Gruit was made from it, and it was used in flavoring beer. It was an ingredient in salads in the 17th Century.  For thousands of years it was known as Herbe Militaries or Soldier’s Woundwort.

A Yarrow plant grows 10 to 20 inches high and it produces several stems. The leaves of the plant are feathery and are spirally and evenly distributed along the stem. These leaves are hairy, Pinnate and alternately divided into small segments. And they are larger at the base, 3 to 4 inches long and 1 inch wide. Its leaves are green in color and when crushed, they have aromatic smell. During the summer season, it grows stalks, but their height depends upon the rainfall. These stalks preserve energy in their roots. Flowers of the plant are formed by several bunches of flat topped panicles and these consist of many small white flower heads that have 20 to 25 Ray flowers of yellowish-white color.  The flowers appear in May to August. This plant has sweet and strong fragrance. Its flowers spread quickly and are drought tolerant. The Yarrow plant is native to the temperate regions of the Northern Hemisphere, Europe and Asia. It is naturalized in North America and other countries of the world. In Canada, Central and Eastern United States it is common in old fields, pastures, roadsides and meadows. It is frequently found in open forests and grasslands. In California, you find them in every habitat except the Mojave Deserts and Colorado.

A Yarrow plant grows easily from seeds. For propagation, its seeds need light for germination. Seeds should be sown in moist and normal potting soil. Depending on the conditions, its seeds germinate in 12 to 21 days. After it grows and attains enough height, the plant can be transplanted to a sunny location. Dig a large hole to place properly the big roots, and provide water deeply, but only occasionally as its deep roots can acquire the required water and nutrients from the soil itself.

The Yarrow herb is used to treat various diseases such as cold, hay fever, dysentery, loss of appetite, diarrhea and gastrointestinal tract discomfort. It is also used to induce sweating and its fresh leaves are used to relieve toothache. Its flowers and young leaves are used in salads. It is also used against kidney disorders, skin irritation, cramps and hemorrhages. Its essential oil is used in the making shampoos and skin lotions. This essential oil is dark blue in color and it is extracted by steam-refining of flowers. Its herbal tea is a good remedy for flu, stomach ulcers, severe cold, bleeding and trauma and for abdominal cramps. It is also used to aid eczema. Its fresh leaves are chopped and used in making soups, salads, stir fry foods, cooked beans and meat dishes. If you wash your head with Yarrow, it can prevent baldness. It is also used to treat urinary tract infection and cystitis. It is useful in stimulating digestion and addressing liver problems. Its leaves are used as leaf vegetables and cooked as spinach. They also use them in bitters and liquors. These leaves are also used as a remedy for  Nose bleeding.

The Yarrow plant requires care and maintenance for good growth.  Each spring season, mulching around the plant is ideal for retaining moisture and to control weeds. It cannot tolerate wet soil. Once established, it needs little care.

Many pests and diseases affect the yarrow plant. Pests such as aphids, spittle bugs and scale become a problem. Powdery mildew has also attacked the plant. Diseases such as root rot and leaf rot affect the plant. These diseases cause a powder like substance on the flower and destroy the plant. It also attracts beetles and butterflies. Spraying of insecticides and pesticides reduce pest problems and disease.

The best time to harvest the yarrow plant is when the plant is in full bloom and dry. Its flowers and stem are harvested in the morning time.

Any prescribed dosage of herbs or medicines depends on many factors like age, sex, health and weight. Till now, there is no clear evidence on the dosage of the Yarrow herb. Some experiments have made use of Yarrow herb. The conclusion reached was that, to using 4.5 grams per day to cure inflammation and related ailments was not a problem. Pregnant ladies and lactating mothers should not use this herb without doctor’s advice.

There are no serious side effects reported till now, other than allergy. It is also said to slow down the blood clotting process; hence Yarrow should not be used before or after the surgery or it will cause excess bleeding.

Seeds of the yarrow plants require a germination temperature of 18 to 24 degrees C. If the seeds are planted in indoors, then it requires a temperature of 65 and 75 degrees F for germination. This plant flourishes and thrives in a hot and dry climate. It will die in cold, humid and wet weather conditions. It is winter hardy in USDA Zone of 3 to 9.