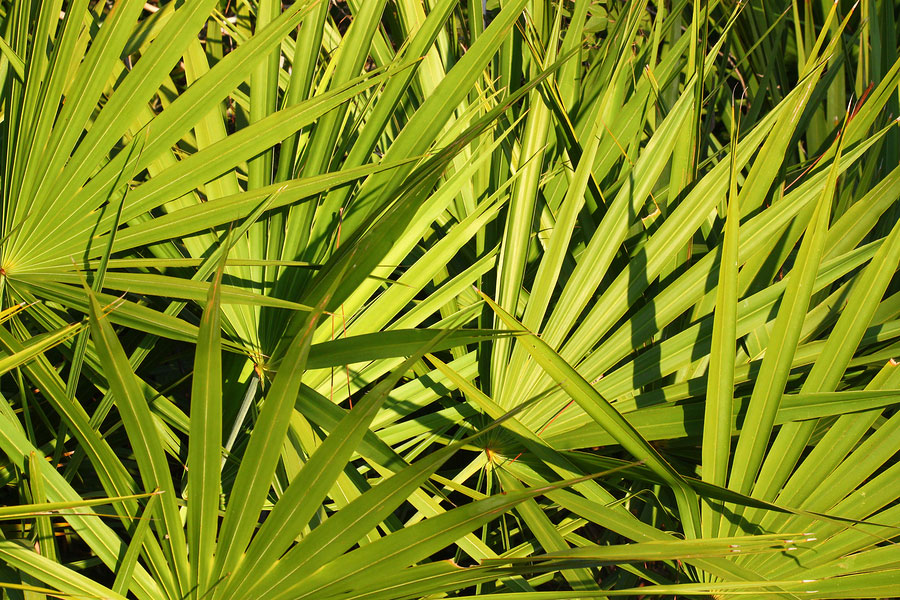 This little Saw palmetto palm tree is indigenous to the eastern provinces of the United States. The Seminole tribal folk of Florida used its fruit in the medical field.  Besides, it has a traditional usage as a remedy for symptoms of urinary problems related to the enlargement of the prostate gland, (this is also known as benign prostatic hyperplasia or otherwise BPH); in addition saw palmetto is used to alleviate unceasing pelvic pain, reduction in the urge for sex, disorders related to bladder, loss of hair, prostate cancer and imbalance of the hormones.

The Seronoa Repens, which has a natural name saw palmetto, is the only variety presently known in the group of the Serenoa genus. Saw palmetto has several synonyms in its classification such as Sabal Serrulatum.  It is from this name that it is frequently seen in substitute medicines. This little palm tree grows as tall as almost 7 to 10 feet (2-3m), it has a sprawling trunk. It grows in thick groves along the coastal sandy lands or rather found growing beneath the hardwood hammocks or pine wood. The trunks or stems are hardly seen in the erect form, but occasionally you can see these in certain locations
In ancient times, the tribal people of Florida used the berries of the Saw Palmetto plant as a source of food, though some people like the European tribes did not enjoy its taste. It was used in the medical field only in the late 1870s, when the herbalists realized its importance in treating prostate and other conditions related to urology. From the year 1926 to the end of 1950, this herb was included in the National Formulary and in the year 1906, it was also involved in the US Pharmacopeia.

In the coastal areas the color of the leaves is white and silvery, whereas in the islands they are pale green. The length of the leaves is 1 to 2 m with 50 to 100 cm long leaflets. They are identical to the palmetto leaves belonging to the Sabal Genus. The color of the flowers is whitish yellow having a width of almost 5 mm. They develop into a thick compounded form of panicles reaching 60 cm.

This saw palmetto is generally seen in the southern and eastern provinces of the United States, frequently alongside the coastal regions of the Gulf of Mexico, such as Florida. But it is possible to see them North of Georgia. Palmettos are generally found on the lower floor beneath the canopy of trees.

Both the sun overhead as well as the soil of your palm tree needs care to keep them healthy. Therefore, ensure that you provide it with the precise type of soils it requires. Many of the varieties can tolerate Alkaline or acid soils. However, some other palms are slightly choosy. Generally, you would do well to ensure that the soil is properly drained.

When you select the right location of planting for your saw palmetto, the next step is to confirm that you plant it precisely. In the regions where the climate is cold, spring season is the right time to plant them, the time when the fear of frost is over. Do not plant your saw palmetto in the periods when it is dry; juvenile plants are vulnerable to injury on account of weather conditions.

Your Saw palmetto requires watering in its tender age only. Fundamentally the established plants of saw palmetto do not require any maintenance and they never require water often, the plant will perish if it is over watered.

These palms occur in various climatic regions. Certain varieties are originally from the areas where it is hot the whole year. The maximum temperature during the day is 950F and a minimum of 780F at night. In the higher ranges, during the daytime, the temperature reaches a maximum of 70 degrees or 80 degrees F and a minimum of 40 degrees or 50 degrees.  Certain types are capable of facing snow occasionally, whereas other varieties are capable of withstanding high temperatures that exceed 1000F.

Prior to the application of any type of fertilizers, allow your palm tree to get accustomed to the location. When they are settled, fertilize it with two portions of magnesium, one portion of phosphorus, two portions of Nitrogen and three portions of Potassium. In a year apply fertilizer four times.

In California, the palms that grow in the landscape, are affected by many acute diseases. The most commonly seen disease is Bud rot, affected by many fungal pathogens, Phytophthora species, Bacterial pathogens and Thielaviopsis species. The other is Fusarium wilt which is a type of fungal disease that causes the leaves to wilt and lose color and finally the plant dies. It is a serious disease because it has no remedy. The other common diseases are Leaf spot, Ganoderma root, Scales, False smuts and many more. Pests like a Royal Palm Bug, Palmetto Weevil and Palm Bud Worm also harm the palm trees. The ideal methods of controlling these diseases lie in selecting the right species, taking essential care, taking precautions, eliminating and maintaining hygiene.

There are no clinical evidences that provide the exact dosage of Saw Palmetto but it is considered safe in normal conditions. The Saw Palmetto berries are available in a dried form for consumption. The dried berries are also available in powdered, tinctures, tablets and extract forms. For the treatment of prostate, the prescribed dosage is 160 mg twice or 320 mg as a single dose, daily. No serious side effects have been reported yet.

Saw Palmetto is a safe herb to use, but, if not used in an appropriate manner, then some side effect can be experienced like stomach pain, allergies, intestinal pain, gas, indigestion, heartburn, constipation, bad breath, vomiting and nausea. Hence, using it after seeking medical expert’s advice will be beneficial.

The saw palmetto fruits are very rich in phytosterols and fatty acids. Deep research was done on the extracts of the fruit for the symptomatic cure of benign prostatic Hyperplasia (BPH)
Several meta-analysis of medical tests have proved that extracts of S Repens for the cure of BPH is as an effective and safe for medium to low BPH,  in comparison to Placebo, Tamsulosin and Finasteride. Two great tests revealed that the extracts are similar to that of Placebo.
The other common uses are for treating asthma, cough, bronchitis, migraine headache, chronic pelvic pain syndrome, sore throat and cold. It also contains aphrodisiac and sedative properties to enhance sexual pleasure and give relaxation.