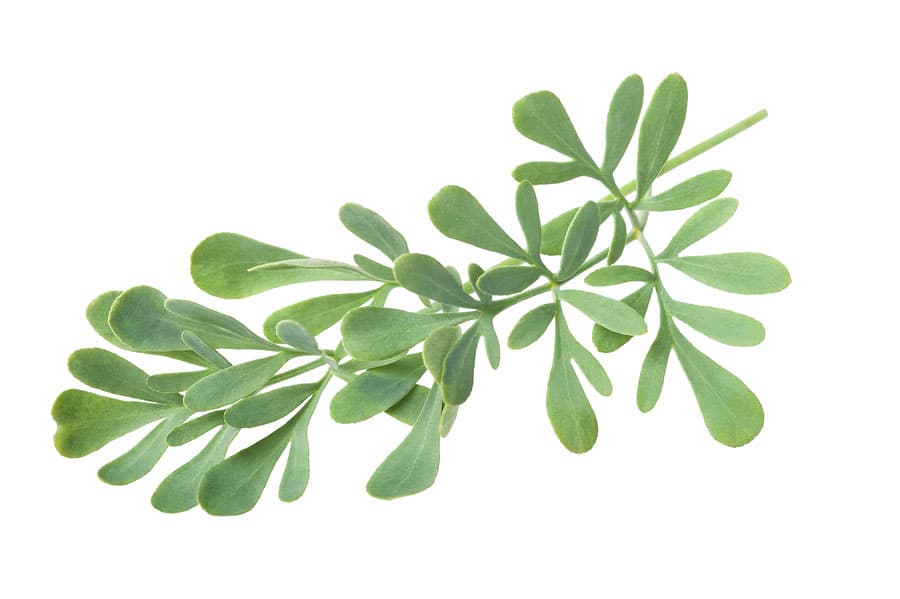 The species Ruta graveolens, also commonly called the Herb of Grace, Rue or Common Rue, belongs to the Ruta genus of the family Rutaceae. It is generally grown as an herb. Originally native to the Balkan Peninsula, it is now found all over the globe. It is grown in gardens as an ornamental plant, particularly because of its blue colored leaves and occasionally due to its ability to tolerate dry soil conditions and hot temperatures. Besides its ornamental value, the common Rue is also cultivated for its medicinal value, its use as a condiment and on rare occasions as an insect repellent.

Rue has a long and rich history due to its medicinal properties.  The term Ruta is derived from the Greek word “Reuo” which literally means “to set free”. Earlier, people used this herb for treating a wide variety of ailments. In those days, people planted this tree at home to keep away plaques and pests. It was considered as a protective herb that prevents deadly diseases. It was also considered good for the eyesight and improving vision. Some studies claim that legendary heroes like Leonardo Da Vinci and Michelangelo ate the bitter small leaves to improve their eyesight and creativity. Many herbalists of those ages like Hippocrates considered this herb very useful in the medical field and recommended its use. Wiliam Turner, a physician has included the name of Rue in his Herbal book published in 1562.

The leaves of the common rue are two- or three-lobed, feathery in appearance and green to blue green in color. The flowers consist of 4-5 petals, are arranged in cymes, 1 cm in diameter when fully bloomed and brightly colored yellow. The fruit is a capsule made up of 4-5 lobes containing many seeds.

The genus Ruta, commonly called rue, belonging to the family Rutaceae, consists of evergreen sub-shrubs that grow to a height of 20 inches  (60 cm). They are strongly scented and are native to the Mediterranean region, besides Micronesia and southwest Asia. The genus comprises of roughly 8 to 40 species, the most popular being Ruta Graveolens, (Rue or Common Rue).

The Common Rue is not very fastidious, and easily grows in moderately fertile and well –drained soils in full sun, requiring dry to medium moisture. These plants can tolerate some light shade as well as poor soil as long as the soil is sharply drained. Once established, they are drought tolerant. These plants also grow well in hot and dry regions, but wet soils, however, must be avoided. Winter mulch is an essential part of their cultivation in the northern parts of their growing regions. These plants must be pruned in early spring to remove the old wood and can be propagated by seeds or cuttings.

New plantings should be watered regularly until they are well-established.  Once established, the Rue is quite tolerant of drought conditions. Though the Herb of Grace plants need not be watered under normal condition, during prolonged drought conditions, however, they would need watering. During winter, the base of the plant should be mulched to protect it from frost damage.

Phytophthora root rot is a common problem that is known to occur and can be averted to some extent by planting healthy plants from reputable nurseries in well-drained soils.

The Common Rue is generally disease free and is known to thrive well with minimal care.

A tea is made from the leaves of the Spearmint plant and it is used in the treatment of the hirsute in women. The oil of Spearmint is used in flavoring in liqueur, candy, gum and dentifrices (Like Toothpaste). It is also used in scents. The leaves of Spearmint can be used dried, fresh or frozen. As a flavoring agent it is also used in foods. It is used to treat cold, headache, sore throat, toothache and cramps. It is helpful in digestive disorder such as gas, indigestion, nausea, diarrhea, gallbladder swelling and irritable bowel syndrome. It is also applied directly to the skin to treat arthritis, for swelling in the mouth and nerve pain. Its leaves are used in the making of mint sauce. It is also used to flavor ice cream, jelly, jams and cakes.