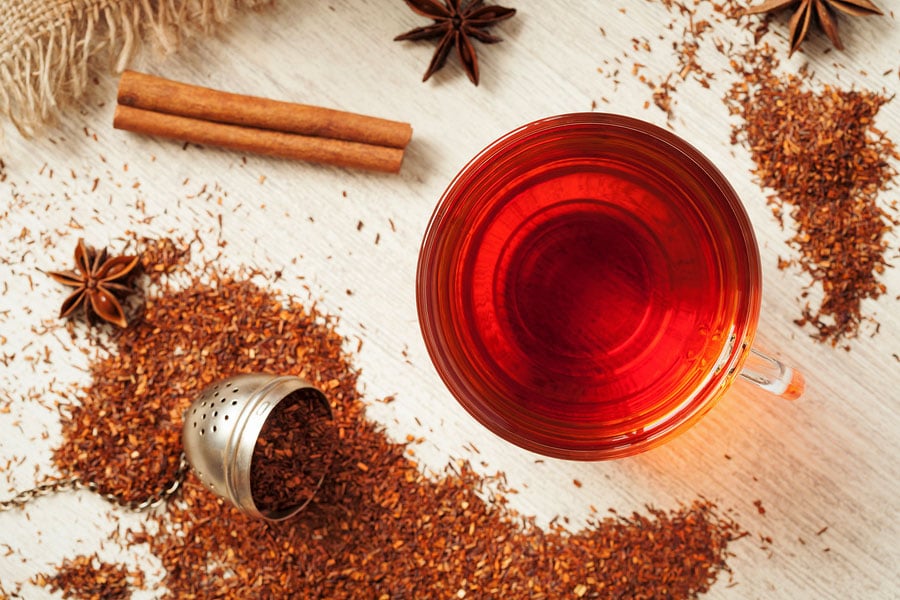 Aspalathus linearis, commonly known as Rooibos is a bushy plant or a broom shaped plant belonging to legume family. It earned this generic name from the Greek term “Aspalathos” which is actually the name of a genus of plants, botanically referred to as Calicotome Villose.A red tea is associated with this herb because its leaves are used to prepare the herbal tea which is red in color. This red tea is popular in many countries like England and Southern Africa, where it is termed as a bush tea.
This Rooibos is native to the Fynbos habitat in South Africa but now it is produced in large quantities in the Cederberg region of South Africa. The needle shaped leaves are of great importance in the therapeutic field.

Around 300 years ago, the natives of the Cederberg region found the useful shrub Rooibos and discovered the health benefits of brewing a tea out of it. Later in the 17th and 18th century, herbalists from other regions got to know about this herb and its qualities. In those days, the wild Rooibos was harvested by using an ax and then the leaves were carefully removed and bruised using a hammer. Then it was left to ferment and lastly dried under the sun. Even today the same process is followed, but in a more technically sophisticated way. Some early Dutch natives used the Rooibos herb to brew tea instead of the more expensive black tea. The Russian immigrant, Benjamin Ginsberg discovered this unique herb and its properties in 1904 and started trading this herb which continued for many generations and still the new Ginsberg generation is in the trading business of the Rooibos herb. Carl Thunberg, a Swedish naturalist had reported about the Rooibos herb when he visited the Cederberg region in 1772.

The Rooibos plant is a small shrubby plant that grows about 2 meters in height. The stem of this shrub is red in color and has an erect posture. The dark green colored leaves have a needle like shape that gives a bushy look to the plant. This plant bears small yellow flowers that bloom from spring to early summer. A small single seeded bean is produced by each flower. This plant has long taproots under the ground that grow about 2 m in length which helps the plant to thrive well even during the drought season.

The Rooibos plant is usually seen in its original habitat in the Fynobs region of South Africa but can be commonly seen now in the mountainous region of the Cederberg in Capetown, South Africa. It can also be seen in the similar climatic regions in the nearby villages of Citrusdal and Clanwilliam. This herb grows only in a particular soil and climate, hence the efforts to cultivate this herb in different countries having similar climate have not been successful yet.

Rooibos is a hardy shrub to the dry zone. It is a drought resistant; hence it can adjust to dryland areas with moist and wet frost climate. It grows rapidly in deep sandy soil and the long taproots can explore well in such soil. The soil should have enough drainage capacity and the pH value preferred by Rooibos is 4.5 to 5.5.

Rooibos can be grown by the vegetative method like cutting and seed germination. If propagating from seeds, then the seeds must be soaked in boiling, hot water for the whole night. The preferred time to sow the seeds is in early spring. Mix potting soil and granule sandy soil in equal proportion in a seed tray. Place the seeds about 2/5 th of an inch deep. Provide some moist compost and place it in a good sunny location or greenhouses. Once they are established, each plant can be planted in separate pots. It should be placed in a soil that has a combination of peat-based acidic compost along with coarse sand in equal proportion. Big plants can be placed under direct sun and warm climate. After a year, the plants will be well established enough to be transplanted. Transplanting should be done in a similar sunny location with well drained acidic soil.

Rooibos is grown in dry climates and is drought resistant. The matured plants are not irrigated, but still it produces a high quality Rooibos. During the germination period, it requires regular watering, but the soil should be well drained to prevent soaking. The good quality Rooibos is cultivated in regions where the annual rainfall is between 200 to 400 mm.

The Rooibos herb grows in a specific climate that includes less rainfall, dry land and warm climate. It can adjust till 0 degree centigrade during winters to nearly 45 degrees in the summer season. The germination process also requires enough temperature,  and the seeds are placed under the sun to germinate rapidly.
In the drying process, the leaves are spread in an area having a temperature nearly 30 to 40 degrees Celsius in the day and around 28 degrees in the night time. It requires around 3 days to dry completely.

In the cultivation of Rooibos, weeds are also a big problem for the vegetation. The horse grass weed is usually seen along the Rooibos herb that affects the growth by competing for water and nutrients from the soil. It should be regularly checked or it may cause huge damage.

The Rooibos plant is harvested only once in a year and that is during the summer. Harvesting is done by cutting the plant around 30 cm above the soil and then it is tied into neat bundles and trimmed to less than 4 mm. Later, the leaves and the stems are bruised using a hammer and then left in heaps to ferment. During this process, the leaves turn from green to dark amber and attain a flavor and aroma. After the fermentation process, it is laid under the sun to dry.

The Rooibos herb is affected by many pests and insects. The most affecting pest is the Leafhopper, and it harms during the summer climate. It directly affects the Rooibos tea leaves by causing discoloration, and eventually, the leaves cannot perform the process of photosynthesis, and dies. Other pests like Clearwing moths and Looper worms also harm the plant. Diseases like crown-rot and root-rot are also commonly seen to affect the plant. Crop rotation is the best suitable method to prevent both the pest and the diseases. Sometimes,  after the harvest, the bushes are cut using a brush cutter and then the area is burnt to prevent any fungal diseases.

Rose hips were used since ancient times for their medicinal and culinary properties. It is a great source of vitamin C and hence can be used to cure flu, cold and vitamin C deficiency. It is also effective to cure stomach related disorders like stomach irritation, pain, spasms, ulcers, constipation and stomach acid deficiency. It is a good remedy for curing diarrhea, gallstones, diabetes, leg pain, cholesterol, weight loss, kidney disorders, high blood pressure and many more.
In culinary use, it is used to make jelly, jam, Rose Hip Syrup, beverages, wine, pies and herbal teas. It is also edible, and you can eat it directly, but many chefs prefer using it boiled.