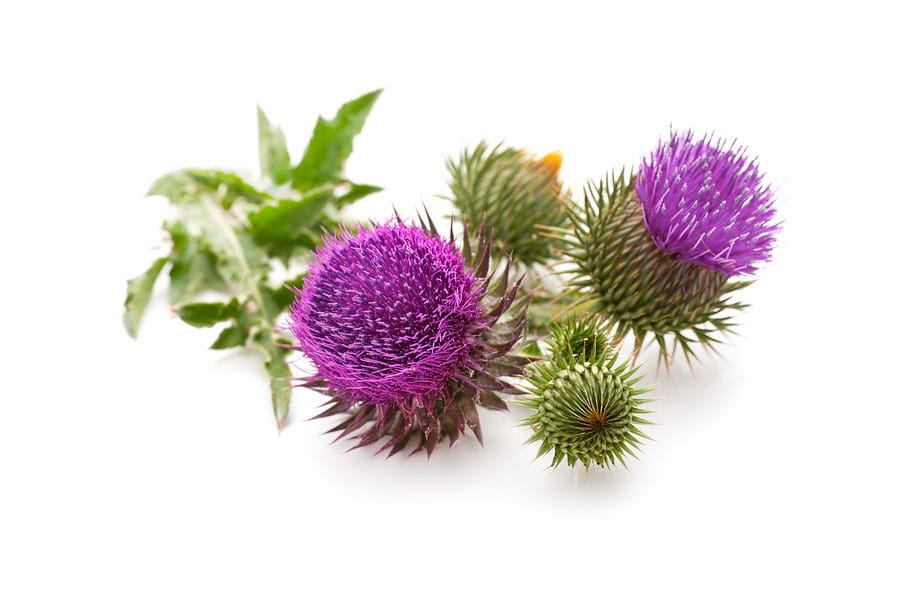 Silybum Marianum, commonly known as milk thistle is a herbaceous annual plant belonging to the Asteraceae family. The other synonyms are blessed Milk Thistle, Cardus Marianus, Scotch Thistle, Variegated Thistle, Mediterranean Milk Thistle, Saint Marys Thistle and Mary Thistle. Though it is found throughout the world now, it actually originated from regions belonging to Southern Europe and Asia. This beautifully flowering plant is a biennial shrub that bears attractive flowers in red or purple shade with glossy leaves having dull green color and white veins. It is thorny vegetation found in the Mediterranean region where it develops as a scrub on the rocky substrates.

Milk thistle has a long, history dating back to 2000 years. The main purpose of this herb in those days was to treat the liver dysfunction. The early people of the middle ages found antidote properties in Milk Thistle that was useful for liver toxins. Dioscorides recommended the use of milk thistle for snake bites. Some Native Americans used this herb to treat boils and other diseases of the skin. Some homeopathic practitioners used milk thistle seeds as a main ingredient in medications for treating gallstone, bronchitis, jaundice and varicose veins.

Milk thistle is a flowering herbaceous plant that grows about 30-200 cm in length and has a base diameter about 160 cm. With a conical shape from top to bottom, it bears leaves that are glossy, ovate with tapering edges and oblong accompanied by white veins and shiny green color. The flowers bloom from June to August in the Northern Hemisphere and from December to February in the Southern Hemisphere in a red-purple shade. They grow about 4 to 8 cm in length.

Silybum Marianum can easily thrive in rich and fertile soil which is usually seen near the river banks. It is an invasive plant seen near the southeast England coast, Iran, New Zealand, Australia and North America. It can also be found in the disturbed areas, sheep camps and any place with high nitrogen level in soil.

Milk thistle grows well in disturbed soil or fertile pastures with high nitrogen content. It can adjust in all types of soil, even clay soil, but does not prefer a light soil.

As all the plants require water for a healthy growth, this plant too requires water but in a less proportion. Regular watering like, once a week is required if there are no rains.

Milk thistle seeds require less temperature for germination process. It will germinate at a temperature of 10 to 30 degree C. Fresh seeds require a cool climate to propagate, whereas the seeds stored in a refrigerator for 4-5 months propagate only in warm temperatures.

Milk thistle should be planted at 1.5 m apart in a row and should be thinned to 60 cm. Regular pruning is not recommended, but a trimming of the flower stems will help to keep the plant bushy.

Generally, there are no such harmful pests to harm the plant other than the caterpillars and snails seen on the foliage. Diseases like powdery mildew and botrytis have been reported in Australia.

Milk thistle seeds are mainly used to make medicines. It is considered as a potent medication for liver diseases. It also possesses some properties to fight poison. Other than that, it is used for treating diabetes, malaria, uterine complaints, allergy, and depression and to increase the milk flow in nursing women.