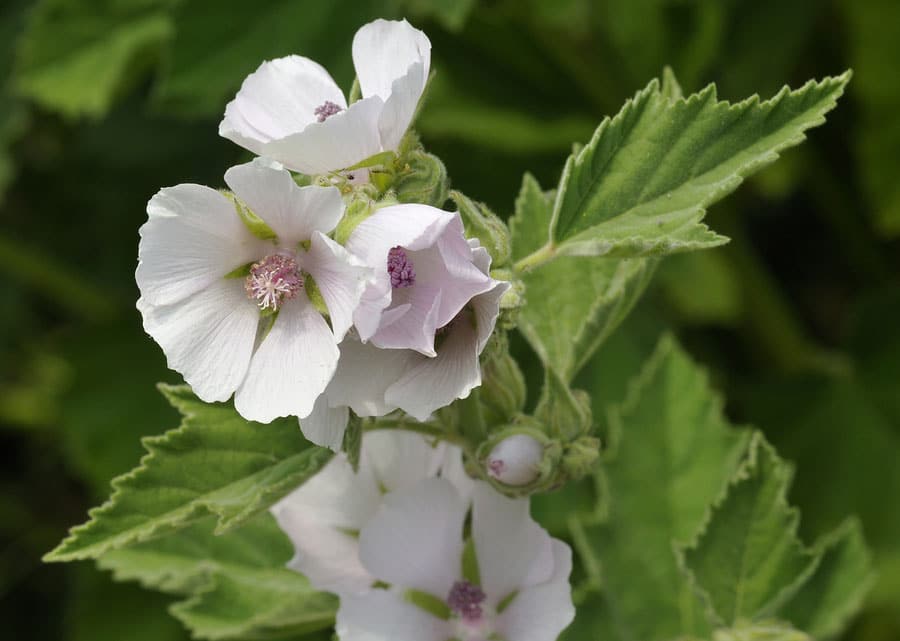 The common marshmallow is botanically known as Althaea Officinalis, a perennial species belonging to Malvaceae family. Originated in Africa, it was extensively used as a medicinal herb and as a showy plant. The root of this plant is well known as an ingredient in a specific confection made in Egypt during the olden times. Even today the confection is popular and referred as todays marshmallow sugar candy. The leaves, flowers and roots consist of medicinal properties and were used since ancient times. It is apparent from the genus name derived from the Greek Althein which means to heal. It bears pale colored flowers usually found in panicles with oval-shaped leaves having short petioles.

Marshmallow has been used as a source of food and a vital ingredient in medicines since about 2000 years ago. Since time immemorial, it was used as a part of the diet among the Chinese, Egyptians, Romans and Syrians. The sweet dish made from this plant was very popular in the Egyptian regions during the middle Ages. The sap of the plant was blended with nuts and honey to make the recipe. Later, the process evolved, and the new recipe made use of the soft, spongy tissue derived by removing the outer part of the stem that was cooked along with sugar syrup to make the sweet confection used in the dried state. The plants sap was very popular among the gladiators in ancient Rome. In traditional Chinese medicines, it played an important role in soothing bronchial tubes and enhancing the milk flow in nursing mothers. Also used as a traditional medicine in curing the discomfort in the mucous membranes, it was used for sore throat and mouth ulcers.

Marshmallow is a herbaceous perennial plant that dies in the autumn and again emerges in the spring. Its stem grows upright, sparsely branched, to a height of 3 to 4 ft. The oval or more roundish shaped leaves grown on a small petiole, attains a length of 2 to 3 inches and a breadth of 1 and a half inches. Leaves grow thick with toothed margin in 3 to 5 lobes and the stellate hair covering both sides of the leaves gives it a velvety texture. The flowers grow in panicles and are often pale or reddish white color that looks similar to the flowers of the common mallow herb but are comparatively smaller. All the parts, especially the roots consist of mild mucilage.

Marshmallow prefers salty soil with a moist environment; hence it can be seen in most parts of Europe, north eastern areas of North America and some parts of Asia. It can be seen growing in damp meadows, brackish marshes, around the coastal areas, near the banks of rivers, etc., where the soil is always moist, and in the surroundings of ditches.

Marshmallow can adjust in all types of soils like light, medium and clay, but the only condition is the soil should be moist and pH value should be high as it can thrive in saline, acidic or neutral soil. It grows well in black colored, extremely fertile soil called as black-dirt, soil and it yields better when grown in such mechanically composed soil. Planting by the seedling method is a bit tricky, so patience is needed. It takes longer for the seeds to germinate; hence it is preferable to sow seeds indoor about 10 to 12 weeks before the end of frost. Getting the seeds stratified will help in the germination process. Seeds can be sown in a light soil pot fertilized with good organic compost. Care must be taken to keep the soil moist all the time, with enough sunlight. In the beginning, all the seeds can be sown in a single pot, and as they emerge, they can be placed into individual pots. Transplanting should be done only after it grows large enough and a distance of 3 feet must be kept. Plants should be supplied with a good amount of water; hence using a soaker hose near the base path will be excellent. It should be used for at least an hour every day, especially during the hot climate.

Water, an important aspect in the growth of marshmallow, should be supplied regularly, especially during the dry spells. The soil should be moist all the time and should never be allowed to dry out. An hour a day, water should be supplied with a soaker hose to the established plants for a speedy growth.

For direct sowing, the preferred time is early fall or late summer. Seed stratification is recommended for early germination. Plants should be thinned as soon as 2-3 leaves start to emerge. Weeds should be regularly checked and cleared. Provide with essential compost along with sufficient light and water for a healthy growth of the plants.

Marshmallow is not frequently harmed by any pests and diseases, but some like mallow rust, powdery mildew and Fusarium wilt can be seen affecting the plant. Pests like a flea beetle can also cause harm to this plant.

All the parts of marshmallows are edible and very useful for medicinal purposes. It was used as a vegetable in many cultures and a Roman dish made with marshmallows was very popular. In the Middle East regions, a delicacy called Hawaii includes the essence of marshmallow roots. Even the flowers and leaves are palatable and can be used in salads or stews. The root can also be used as a vegetable or to flavor many dishes, by drying and powdering or making pastes. It is also used in making a popular confection called as Marshmallow. Tea, brewed from the flowers and roots is also very common in some cultures.It is treasured for its medicinal properties since ancient times. It was considered useful as a home remedy for many ailments like bronchitis, dry cough, mouth and throat irritation and ulcer. The leaves have the medicinal properties to treat respiratory disorders, urinary problems and kidney stones. The roots are used for treating mainly the mucous tissue infection and related problems. It is also effective in skin treatment and digestive problems including gastritis, inflammation of mouth, colitis and enteritis. The dried root is used as a toothbrush for curing tooth ache and to maintain healthy gums. It is also included in skin cosmetic products as it has the ability to soften the skin.