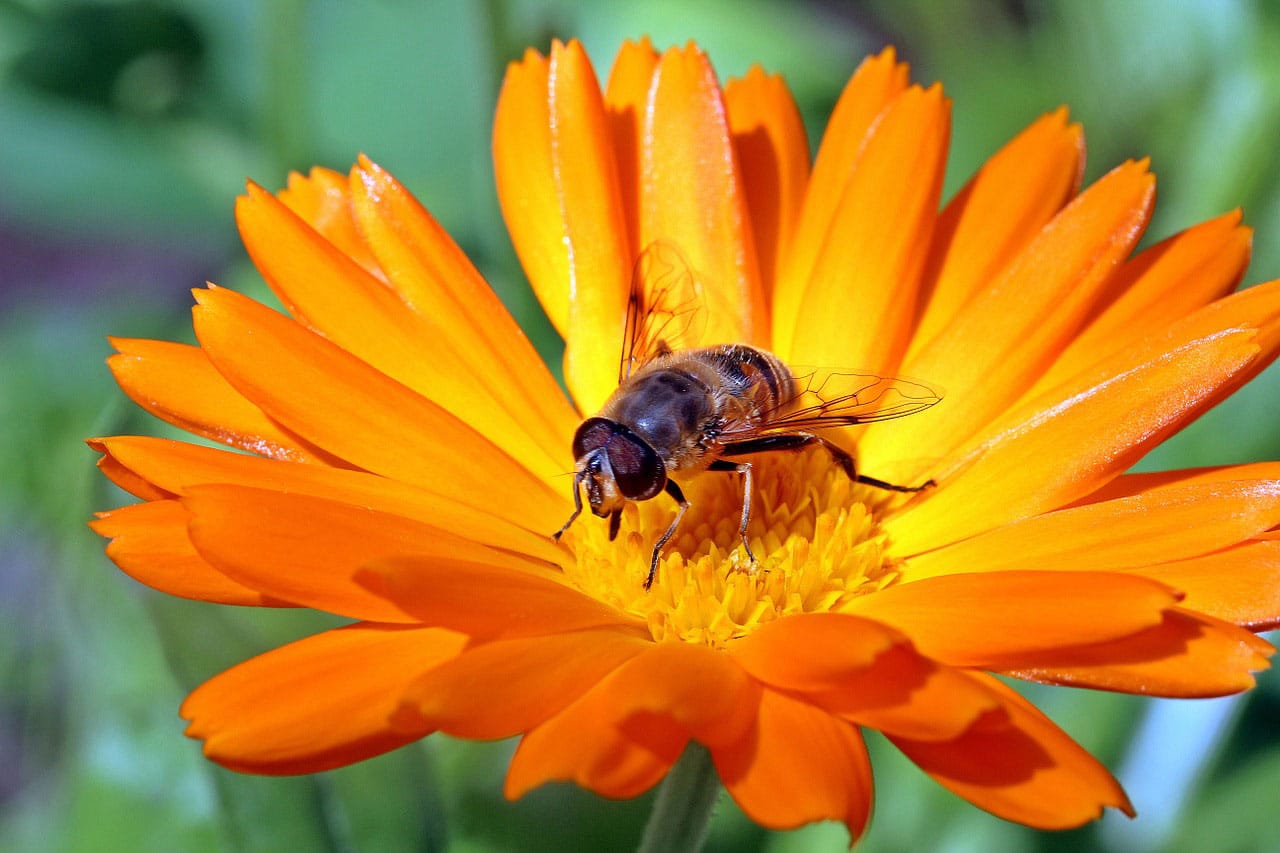 Common Marigold, usually know as Calendula or pot marigold (US) is a herbaceous annual or perennial plant of the Asteraceae family. This genus has around 15 to 20 species which are known as different types of marigolds like Desert Marigold, Corn Marigold, and Marsh Marigold. They are indigenous to Western Europe, Macaronesia, the Mediterranean and southwestern Asia.

Pot marigold was used as an ornamental plant for a long time till its medicinal values were discovered. It was grown in European gardens from 12th century itself. Its flowers were used as a drug to treat stomach ache and intestine diseases. It was also grown by Indians, Arabs, Egyptians and Greeks for medicinal purposes in the 12th century. In ancient Greece, the flower petals were used for decoration purpose. The name Calendula was derived from the Latin word calendae.

The Calendula is an aromatic and a short-lived herb. It is a perennial herbaceous plant that grows up to 80 cm height and has an erect stem. Its leaves grow about 5 to 17 cm long and are oblong-lanceolate. It is hairy on both sides with margins that are occasionally or entirely waved. The flora is yellow in color and has a thick capitalism with a diameter about 4 to 7 cm which is surrounded by hairy bracts.

Marigold is indigenous to specific parts of Europe. But now it is very commonly found as an ornamental herb in all zones, especially temperate zone. It thrives well in sunny locations and in well drained soil.

Experts say, it is very simple to grow a pot marigold. It will thrive in any soil but prefers a rich and moist soil. The seeds should be sown at a gap of 12 to 15 inches and 1/4th inches deep into the soil. The soil should have a pH level of 5.5 to 7. If planning to grow indoors, the seeds should be sown ¼ inch deep and in the early spring. In hot areas, it can be sown in autumn. Transplanting should be done only after 8 weeks. Germination should be done at dark and it will take about one or two weeks.

Calendula doesnt require regular watering, except in dry climates. Water should not be sprinkled with the flowers and the leaves, to avoid mildew and water logging. Even if water is sprinkled on the leaves, it should be done early in the morning, so that the leaves will get time to dry.

Young plants should be trimmed to make it bushier. Deadhead should be done to maintain prolonged blooming. The blooms should also be frequently cut to encourage more budding. Water the surrounding areas along with the plant and keep the soil moist. Provide occasional manure.

The Calendula has many uses; medicinal, culinary and ornamental. The flowers are used for ornamental purpose and to make yellow dye out of it. The petals can add color and flavor to salads and cheese. The flower head is bitter and mainly used in making medicines. The Greeks and Romans considered golden Calendula as very sacred and used it during ceremonies and rituals by making garlands and crowns.