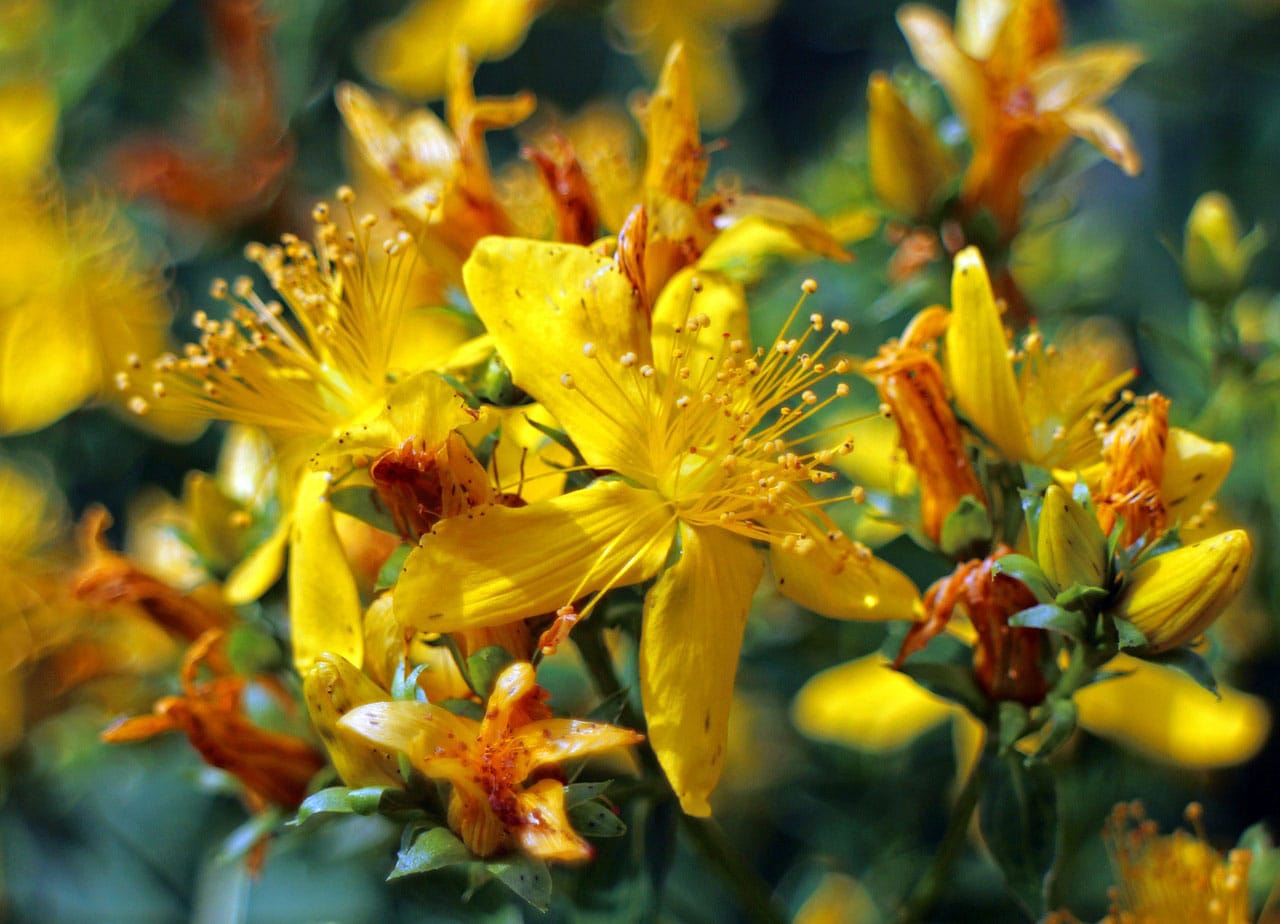 Saint John’s wort is also known as Common Saint John’s Wort and Perforates John’s Wort. Its botanical name is Hypericum Perforatum.  It is a flowering plant and a Stoloniferous perennial herb. The photosynthesizing property of the plant is toxic to sheep and cows. It has Antidepressant, Antiviral, Antibacterial and Anti Inflammatory properties. It is the most common herbal product of the United States. The leaves and flowers of this plant are used in making medicines. In France, the products of this plant that can be obtained in many forms such as tablets, capsules, oil based skin lotions, teas and tinctures have been banned. It is a slow growing plant. This plant is useful in the treatment many diseases such as jaundice, blood hemorrhages, chronic cough, urinary conditions, bladder issues, lung conditions, dysentery, complaints about the nervous system, parasitic infestations and viral infections. But, it is used particularly in the treatment of depression.

St John’s wort’s, common name came from its traditional harvesting and flowering on St John’s day on 24 June. “Wort” refers to an old English word for plant. In the 400 BC, the ancient Romans and Greeks used this herb to treat many diseases, such as menstrual cramping, reptile bites, ulcers, gastrointestinal distress, superficial wounds and depression. Ancient peoples believed that it confers protection against evil spirits. In the 1st Century AD a Roman military doctor used it as a  magic potions. During the middle ages, it was used to protect against witches, evil and demons. In England it was used in early pre Christian religious practices. Its bright yellow color is related to the Sun and used for the purpose of prediction. In 1850’s, this plant was used to determine that how long family members would live.

The St John’s Wort plant has creeping rhizomes. The stems of this plant are erect and they are branched in the upper section. They can grow up to 4 meters in height. The flowers of this plant have five petals and are bright yellow in color and have conspicuous black dots. Its sepals are pointed and have granular dots on the tissues. It has many stamens. The flowers are about 2.5 cm. The flowers bloom between late spring and early mid summer season. A reddish liquid is produced when its seed pods or flower buds are crushed.

The St John’s wort plant is native to West Asia, Europe, Madeira, North Africa and the Azores. It is found in the many parts of the world, including Australia and North America. It spreads rapidly by means of runners. In the Western United States, it is widespread in Southern Oregon and California. It is native to Ukraine, Turkey, The Middle East, India, Russia, Canada, United States and China. It is commonly found in Canada and the US in the dry grounds of meadows, woods and roadsides. It is not native to Australia. It is considered a weed there. But now it is grown there as a crop and Australia produces 20% of the total world’s supply.

The St John’s Wort plant grows well in warm, light and sandy soil. Clay, rocky and loamy soil is also ideal for the plant. It can tolerate acidic to slightly alkaline soil. It can adapt both dry and moist soil, but grows well in fertile and well drained soil.

The best time for planting St John’s wort plant is early spring or summer season after passing the danger of frost. It has to be planted in a warm and sunny environment. It is planted by the sowing of seeds. Its seeds take three months to germinate.

The St John’s wort plant requires watering. Though it can withstand drought, it  grows well with regular watering. It can also tolerate flooding. After planting, this plant requires deep and slow watering. During long dry spells, it requires more water.

This plant requires a temperature of 70 degree C, during the growing season. It requires full sunlight to partial shade. Germination of seeds is improved by the temperature ranging from 100 to 121 degree C. Once seeding is completed, the temperature has to be 15 degree C.

Once established, the St John’s wort plant requires little care. Until the transplantation of this plant is well established it requires moisture in the soil for good growth. Rotted manure and compost is also ideal for the growth of the plant. Fertilizers are needed if the soil is poor. During the winter season, a layer of mulch is ideal for the plant as it protects it.

The leaves and flowers of the St John’s Wort plant are harvested. The flowers are harvested when they are in full bloom. 1/3 part of the plant is cut off. During harvesting, direct contact with skin and eyes should be avoided. Harvesting is done by mowing, by hand or cutting with a forage harvester. To transport the plant, sacks and tarps can be used.

In many countries, St John’s wort plant is considered as a weed. But some diseases cause damage to the plant. Anthracnose fungal disease can cause a fast death of the plant. This disease is spread by contaminated seeds. Fusarium Crown, Root Rot and Powdery Mildew also attack the plant and cause damage.

The St John’s wort herb plant is known for the treatment of depression, insomnia infections and nervousness. It is directly applied to the skin to heal burns and wounds. It is helpful in relieving emotional and physical symptoms of PMS in women and also irritability, breast tenderness, food cravings and cramps. During menopause, it is helpful in improving mood and anxiety. Many people use this plant in the depression and the situations which go along with depression like tiredness, loss of appetite, trouble sleeping and anxiety. It is also used in the palpitations, attention deficit-hyperactivity disorder, moodiness, obsessive compulsive disorder and seasonal affective disorder,. It is used to treat headache, migraine, muscle pains, irritable bowel syndrome, and chronic fatigue syndrome and nerve pain. It is helpful in treating cancer, hepatitis C and HIV/AIDS.  It is helpful in stopping to smoke. Oil is extracted from this plant. This oil is very effective to treat scrapes, bruises, bug bites, inflammation, hemorrhoids, muscle pain, nerve pain and first degree burns. But is has a serious sensitivity to sunlight.