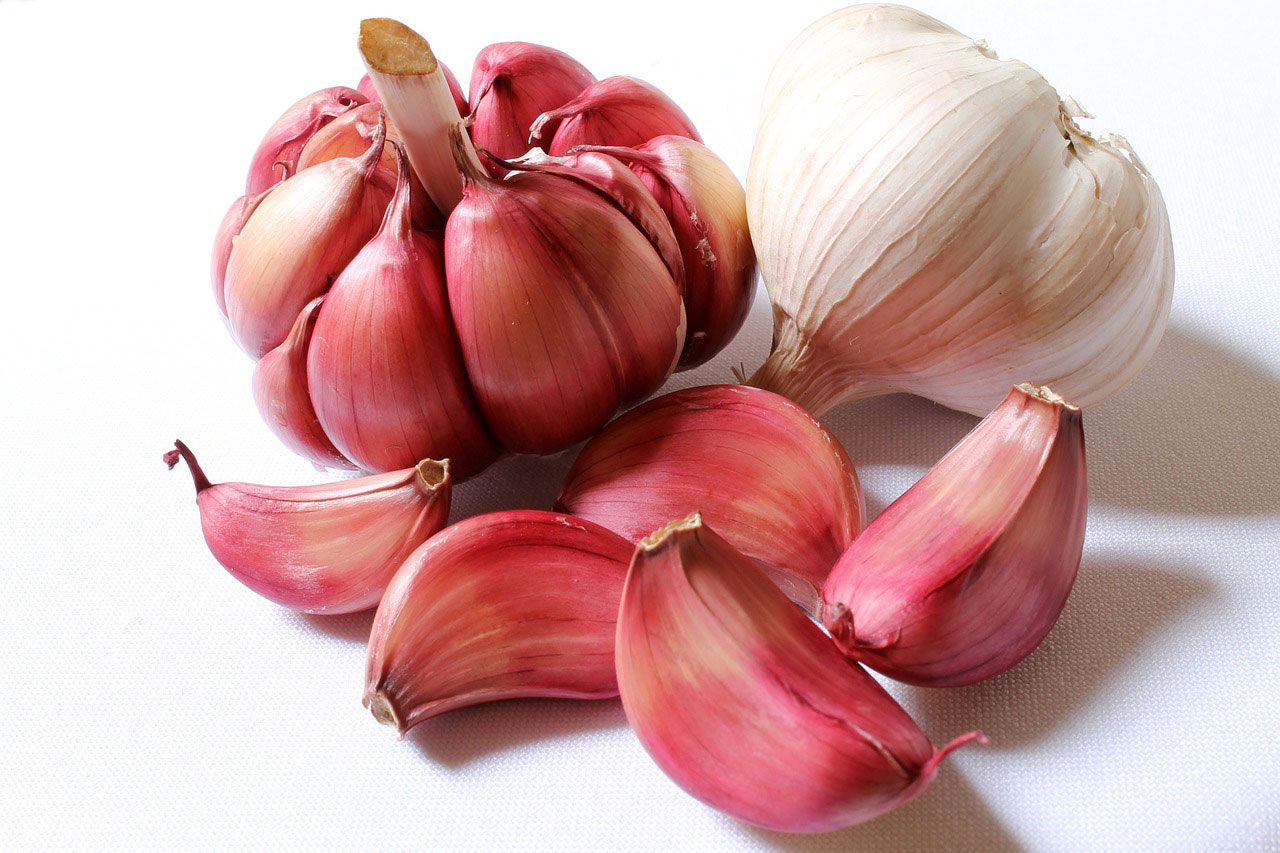 Garlic is also known as Allium sativum. It is a species in the onion genus Allium. Its close relatives are Leek, Chive, Onion, Rakkyo and Shallot. It is bulbous plant. In height it grows up to 4 feet. Its pollination occurs by insects and bees. It is an edible plant. Garlic is nutritious. It is a rich source of vitamin A, B1; B2 and C. Bulbs of garlic are divided into cloves. These cloves are used both raw and cooked. Its flavor is spicy. It is also known for causing bad breath. Garlic is also used for medicinal purpose. The peoples of central Europe believe that garlic is a powerful protection against Vampire, demons and werewolves. To ward off Vampires the peoples hang it on the windows of the houses, they wear the garlic or rub on keyholes and chimneys. In the Islamic religion, it is strictly prohibited for Muslims to pray in the mosque when they eat raw garlic because they thought the foul smell of garlic will distract the other people in the prayer. Devoted Hindus and Jains also avoid eating garlic. It is popular by its strong smell and spicy and delicious taste.

Over 7000 years, the history of humans garlic says that it was a native to central Asia. For thousands of years, it has been used as a medicine and for food purpose. In the Mediterranean, it has been a staple food. At the beginning of history it was used in ancient Greek temples and Egyptian pyramids. It was one of the ancient plants used by humans to maintain the health and treatment of disease.

The flowers and leaves of the garlic plant are eaten. As compared to the bulbs of the garlic they are milder in flavor. Garlic has to be used when the skin is dry. Its leaves are flat and gray green in color. Its Leaves are also eatable. During the favorable period garlic grows rapidly. Growing from seeds is not possible. They should be stored in cool and dry place.

Garlic is used for both medicinal and culinary purpose. It grows in the wild areas. It grows in many countries of the world. But China is the largest producer of garlic in the world. It produces approximately 10.5 million tonnes per year. It is about 77% of whole worlds output. In the United States, Gilroy, California is the biggest producer of garlic. It calls itself garlic capital of the world. Garlic producing countries in the world are India, China, South Korea, Burma, Egypt, Ethiopia, Bangladesh, United States, Ukraine and Russia.

Garlic has to be stored dry and warm above 18 C. Peeled cloves of garlic should be stored in vinegar or in wine in the refrigerator. It requires a .particular humidity, temperature, moisture and ventilation conditions. Favorable temperature for it is 45 to 55 F. A High humidity and low rainfall is good for garlic. The Garlic plant is easy to grow. In mild climates, it can grow the year round. Its cloves are planted in autumn season. 6 weeks before the soil freezes. Cloves should be planted at a good depth to prevent freezing. They should be planted in a warmer climate in the months of March to early April. If planting is done after the month of April, then it will reduce the size of the bulbs. If planting is done in cooler climates, then autumn and spring season is good for them. After planting, it is good to cover the whole area with netting.

The Garlic plant requires moisture in the soil during the growing season. Water is very necessary for it. In the last weeks it does not require much moisture. Over watering is not good for it results in poor quality of garlic. It results in mold, poor wrapping and burst skin. If over watered it is difficult to cure. Regular watering is required by them to keep the soil moist.

The Garlic plant requires good care, maintenance and attention to maintain the best quality of the pods. Good air circulation is necessary for them when the garlic is ready for storage. Mulching is good for this plant as Mulch provides moderation in temperature, moisture in soil and soil amendment. Fertilization is also very necessary for the healthy growth of plants; it provides nutrients to the plant as well.

The best time to harvest garlic plant is when the tops of the plant turn yellow in color. And they begin to die off. This plant takes 8 months to produce bulbs. They must not be harvested too late in the season otherwise bulbs of garlic will shrivel and they would not be good to eat. If they harvested very early, then they would not cut properly and are not good to eat.

White rot disease and nematodes are the two major pathogens which attack the garlic. Other diseases are purple blotch, Fusarium, rust, Penicillium molds, downy mildew, powdery mildew and Botrytis. Bacterial soft rot can also damage the plant. White rot is the most active disease. It harms the plant, by causing rotting on the bulb and it also destroys the root system. It turns leaves yellow and dying the older leaves.

The bulb of garlic is the most important and useful part of the plant. Its other parts are also edible. The sticky juice of garlic with bulb cloves is used in the mending porcelain and glass as an adhesive. It is used in the treatment of respiratory problems, low energy, poor digestion and parasites. Its cloves are used in the preparation of food to add flavor. Vegetable is also prepared by the long and green leaves of the garlic. It is delicious in taste and also good for health. It is also used to treat high blood pressure, cholesterol, circulation problem of the legs and stomach ulcers. If it is taken by mouth (orally) it works as a medicine because it helps in treating colon cancer, rectal cancer and stomach cancer. It is also helpful in treating fungal skin infections, ringworm and jock itch when it is directly applied on the skin.