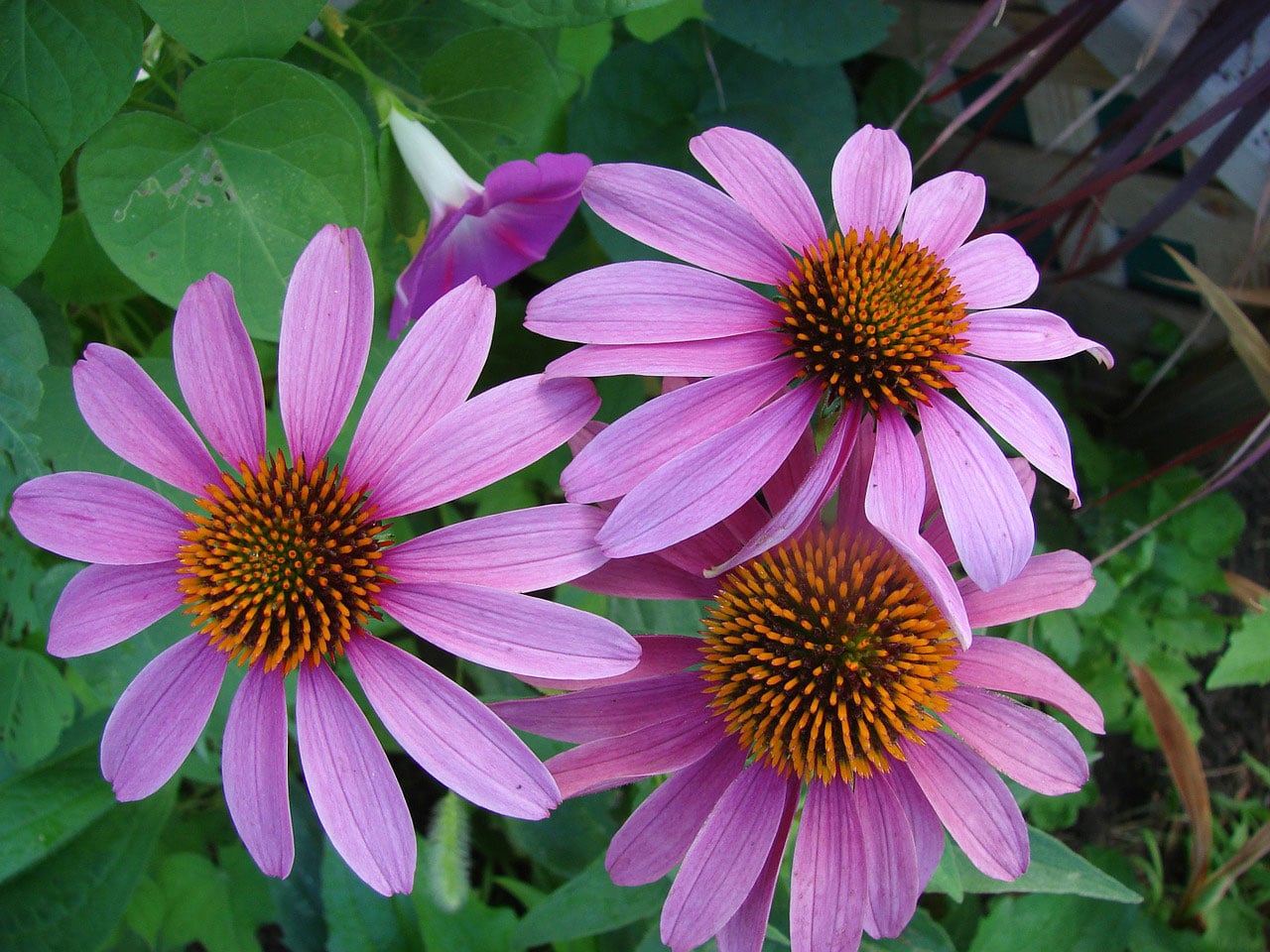 These Echinacea Purpurea, flowering plants, belonging to the Echinacea genus of the Asteraceae family are commonly called Cone Flowers. This genus consists of around 9 species of herbaceous plants that have originated in central and eastern parts of North America. They are usually found in open wooded regions or in dry and moist prairies. These species of flowers are grown for ornamental purpose as well as for medicinal uses. The other names of this herb include snakeroot, Kansas snakeroot, narrow-leaved purple coneflower, Indian head comb flower, black Susan and hedgehog.

Echinacea Angustifolia commonly known as the American cone flowers became a famous herbal medicine in the American and the European regions in early 1800s. It was commonly used by Native Americans and the ethnic Indians of North America for treating cold, flu and as an ornamental plant. From the 19th century, it was considered as a main antimicrobial herb in eclectic medicine (An American medicine branch that combined botanical remedies and physical therapy), and this continued till the beginning of the 20th century. The first medicinal preparation with Echinacea was called as Meyers Blood Purifier which was considered as a treatment for anthrax, neuralgia, pain and snakebite. It was introduced in the market in 1880. In Germany, Echinacea was commercially produced from 1939. It was introduced in Switzerland by A. Vogel around 1950s. The olden tribes like Kiowa used it to get relief from cough and sore throat whereas Pawnee used it for curing headaches and the common cold. Even if a cow or a herd of cattle does not eat well, early people administered Echinacea in their fodder to recover from illness. The Echinacea species flowering plants are from the daisy family that usually grows up to 4 feet tall. They develop from taproots except the species Echinacea Purpurea, because it usually emerges from a small and short Caudex having fibrous roots. The leaves of these plants are mostly hairy and rough. They are arranged alternately and have uniserrate trichomes (1-4 rings of cells). The flowers are large and usually seen in purple or pink color. They have a head like sunflower and the disc grows up to 3.5 cm across. They bloom throughout the spring to early summer. They consist of both male and female organs and are pollinated by bees and butterflies. The stems in these species are mostly no branches, and are erect. The fruits are small and dark with 4-angled achenes.

Echinacea Purpurea can be mostly seen in all the gardens across the United States due to their showy flowers. They are a perennial plant that can be seen in the Midwestern region of North America. It can be also seen in rocky prairies and open-wooded regions. It grows well in moist areas. It is a hardy plant and can be grown in cold as well as hot areas.

The Echinacea does not require regular watering. It is a drought-resistant herb. But during the germination period, water should be regularly supplied till the shoots come out. Irrigate once in a week during hot spells. The soil should get moist about an inch deep. Water should be applied at the morning time so that there is enough time for the water to penetrate into the soil before it gets evaporated by the hot sunlight. It will also allow the water to dry up from the foliage before nightfall thus preventing fungal infections.

The Echinacea genus is most easily cultivated and hence it is widely used in modern herbal treatments. It can be propagated by seeding, division, separation or by cutting. The perfect time to sow seeds is in early spring. Division should be carried out in autumn or spring. There should be at least a temperature of 70 F for the seeds to germinate properly. Full sun to partial sun and moist surroundings should be provided for proper germination. Germination takes place within 10 to 21 days.

Deadheading is the primary care required for these plants. It will help them to bloom all the summer. Though they are drought resistant; regular watering will give good results on their growth. Trim them and make them bushier and it will result in plants blooming longer. Allow air circulation to avoid fungal diseases. Spread 2 inch mulch like bark on the soil bed after planting, which will help to retain the soil moisture by slowing down the process of evaporation. Give them some protection from slugs till they establish. Provide with organic compost in the mid-spring. This will help them to out-rank the competing weeds. After harvesting and drying seeds, place them in plastic bags, which will allow them to respire. Store the plastic bag containing the seeds in a dry, cool and dark place. Seeds thus stored remains undamaged for longer years. Make sure that the seeds are well dried before storing or it may attract fungus.

The herb of the species Echinacea, including its root, flowers and leaves, serves medicinal uses. The medicines made from Echinacea are said to remedy problems relating to infections of the upper respiratory system and the common cold. It improves the overall activity of the cells that fight against all the infections. Thus, it stimulates the immune system and enhances the immunity power. Some people take Echinacea at the first symptom of cold or fever as they believe it will help to control the infection. It is also very effective against other infections like flu, yeast infection, genital infection, urinary tract infection, gum diseases, bloodstream infection (septicemia), tonsillitis, syphilis, malaria, typhoid and diphtheria. It provides treatment for other ailments like chronic fatigue syndrome, migraines, rheumatism, acid indigestion, dizziness, pain, attention deficit-hyperactivity disorder and rattlesnake bites. Sometimes Echinacea paste is also applied to the skin to treat abscesses, boils, burns, skin wounds, ulcers, eczema, UV radiation, psoriasis, skin damage, hemorrhoids, bee stings, and herpes simplex. It also contains some kind of chemicals that can directly attack yeast and fungi.

Echinacea is affected by many pests and diseases like aphids, leaf hopper, fungal infections and Japanese beetles, the plants should be regularly checked and necessary steps taken to avoid/ remove problems relating to: 