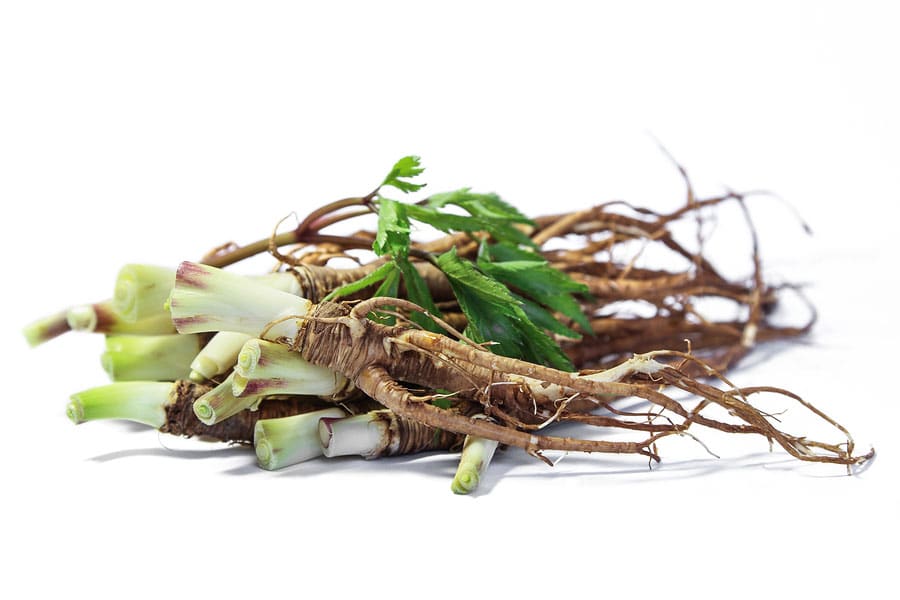 Dong Quai herb is a species of the Apiaceae family, which is native to China. Its botanical name is Angelica (female ginseng). It is mainly found in high altitude mountains where the atmosphere is cool. It is also seen in countries like Japan and Korea. It has been mainly used as a medicine in China for more than thousands of years.

Often called the Female Ginseng, it was used to treat womens health conditions like pelvic pain, painful menstruation, childbirth recovery and menopause. In the late 1800s, extracts of Dong Quai known as Eumenol, was used as a medication for gynecological problems in Europe. It has been used as a spice, tonic and medicine for over a thousand years in China, Korea and Japan. In traditional Chinese medicines, Dong Quai was used as a tonic to treat deficient blood disease like anemia.

Angelica herb grows about 1 to 3m tall and the yellowish brown root of the herb is harvested. Its leaves are pinnate and feathery. The flowers are greenish white in color and bloom in a big compound umbel. These flowers have a specific smell, which differs from other species and sub-species and they undergo pollination by different varieties of pests (generalist pollination syndrome).

Some researchers believe it is indigenous to China, while others believe it is native to Syria from where it spread to other cool areas of Europe. It can also be seen in moist and cold areas of Scotland. As it is a hardy plant, it can be seen extensively in northern countries like Iceland and Lapland. There are around thirty wide varieties of Dong Quai, but till now, only this species is used in making medicines.

The Angelica herb can grow in varieties of soils, from sandy to heavy clay, but the soil has to be moist. It can grow in the sun or in a light shade with proper well drained soil. Care should be taken to keep away the weeds from the plants.

Drip irrigation method or soaker hoses are the efficient way to water this herb. The root zone of this plant should be moist, around 5 to 6 inches under the ground. So, while watering, it should be taken care to apply enough water towards the root area, thus keeping the leaves dry which will protect them from diseases.

Angelica is a short-lived herb. Hence it should be planted annually to get a regular supply. Usually it blooms only after 2 long years and then it dies or stays there for another 1 or 2 years. Angelica can be grown indoors only when the climate is cool. The plant should be transplanted before it attains a height of 4 inches as the taproot grows deep into the soil and then transplanting will become difficult. The yellowish brown root of this plant is best to harvest during the fall.

The Angelica plant should be cultivated where there is enough exposure to light. These plants thrive well in tropical countries due to the climate. A moist soil is equally important to grow Angelica. The root part of the plant should always be kept moist. Water should be sprinkled on the leaves too, to prevent them from drying and discoloring. The leaves are said to be healthy when it is green in color. Care should be taken when the leaves get discolored and turn yellow. Regular watering is needed to make the soil fertile and the plant to be healthy.

Angelica is a hardy plant and is not frost tender. It thrives well in cool and moist climate. It can bear temperatures up to 7 °C. It needs a good amount of rainfall.

Angelica consists of many ingredients that are useful in herbal medicines like Valeric Acid, Safrole, Volatile Oil, Scopoletin, Linoleic Acid and Angelic Acid. These ingredients are useful in treating cold, fever, flatulent colic, cough and other stomach disorders. All parts of the herb, like stem, root and seed are utilized in making Emmenagogue, Diaphoretic, Stomachic, Carminative and Tonic.

Pests like snails, aphids, slugs and leaf miners may harm the plant. It is more likely to be harmed by powdery mildews