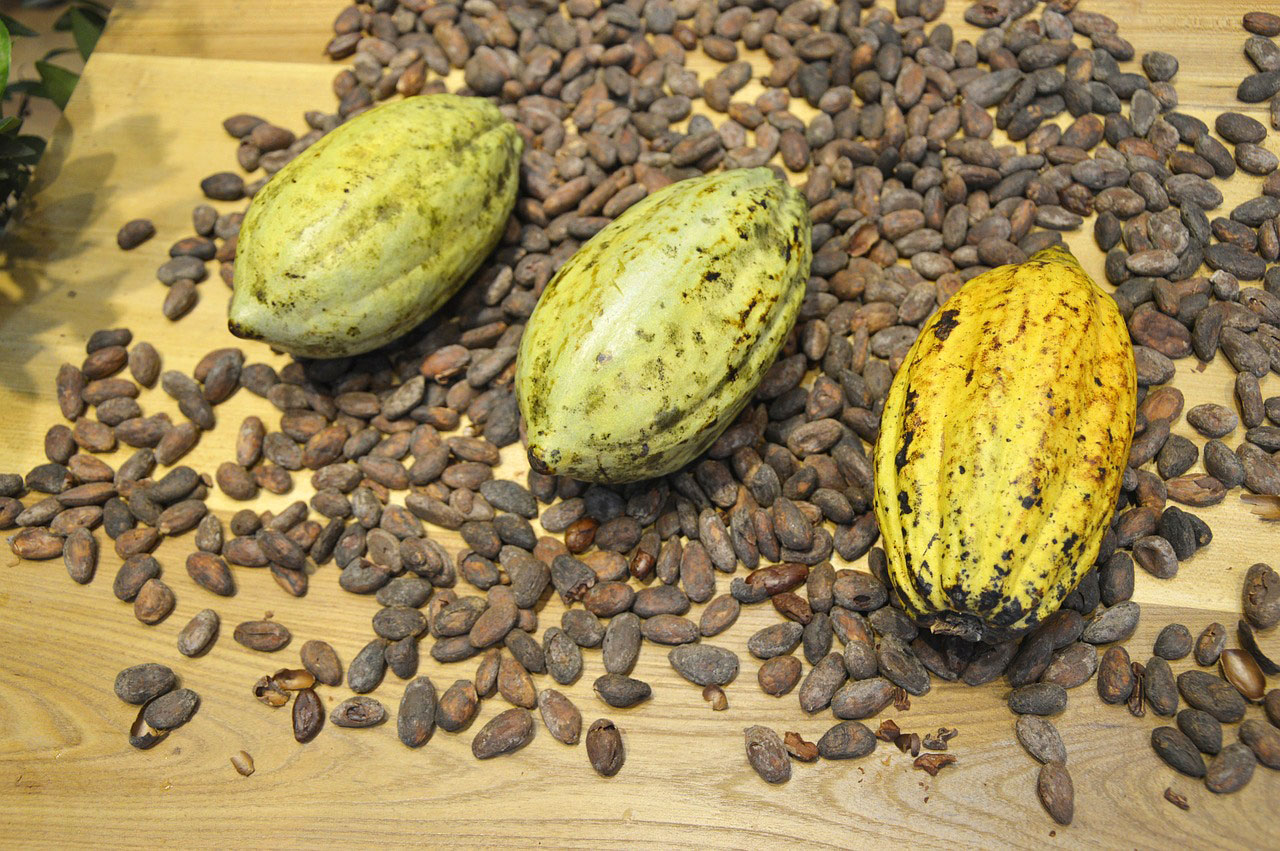 The cocoa bean, otherwise known as cacao bean or just cocoa or merely cacao is the completely fermented and dried fatty seed of the Theobroma Cacao. It is from this that cocoa butter and cocoa solids are extracted. This is the base from which chocolate is made and also the base of several Mesoamerican foods like Tejate (traditional Oaxacan beverage) and Mole Sauce (used in Mexican cuisine).

The Cocoa tree is indigenous to the Americas. Perhaps its origin was in the Andes foothills of the Amazon and South Americas Orinoco basins, besides Venezuela and Colombia where you can still find wildly growing cocoa. Though, there is a probability of its growing in great quantities in the past, there is no clear proof of this, because its cultivation here started very early. and after the arrival of the Spanish. Recent chemical analysis, done on the remains that were taken from the pottery, excavated from the archaeological site of Honduras in Puerto Escondido shows that this was the place where cocoa products were consumed initially around 1400 to 1500 BC. Recent substantiation shows that the flavor obtained from cocoa seed (or bean) was well known, The cocoa plant gained fame in the Americas, on account of the sweet pulp obtained from the chocolate fruit that was made use of in producing a fermented (5% alcohol) beverage, This was how the Americas became aware of the plant.

The Cocoa tree is tall at 12 meters (40 ft) and it has a broad trunk. The foliage of the cocoa tree is leathery, oval, long and pointed. The diameter of its flower that is white in color is around 1.5cm. The color of the calyx (the sepal cup in which the petals are held) is shaded reddish purple. The flower has five ovaries, a single pistil, five petals and six stamens.

The cocoa trees flourish in shady locations; do not cut down the rainforest in order to cultivate Cocoa. Since the cocoa is supposed to have had their beginnings in the low lying rainforests of the river basins of the Amazon in South America, we now come across it beyond the northern regions and in southern Mexico. The final product of these cocoa beans, which is the chocolate, is obtained in the stores the world over.

Cocoa is cultivated in an extensive variety of soils, however, soils that are reasonably fertile are preferred, because the contribution of fertilizer by the traditional system of production are not adequate. The main needs are:
Soil that retains moisture and that which drains to a depth of 1.5 m.

Propagation of cocoa is done either through vegetation or through seeds. Seedlings are produced by taking seeds from the mature pods of mother plants having high yielding power. The chosen mother plants are supposed to have a yield of 100 pods in a year or more and pods that are green and of average or bigger size are ideal. The minimum weight of an average dry bean seed is one gram. Gathering hybrid seeds from Polyclonal (antibodies secreted by diverse B cell lineages) or Biclonal seed gardens of high quality parents that are incompatible is a better method for cultivating seedlings of high quality.

When the temperature is comparatively high, ranging from a minimum of 18 to 21oC and a maximum of 30 to 32 degrees centigrade, the Cocoa plants produce a high yield. Cocoa trees need an atmosphere that is humid and hot for best growth. In countries that grow Cocoa, the humidity is comparatively high: mostly 100% in daytime and 70 to 80 % at night time.

The shell of the Cocoa bean and its pulp, or sweating, that enclose the beans and the Cocoa pod husk are of much use for:
Animal feed from cocoa husk  The husk of the cocoa pod that is 100% palletized (in small ball form) dry is given to animals as feed.
Production of alcohol and soft drinks- Fresh pulp juice sweating of cocoa is accumulated, sterilized and boiled for preparing soft drinks. Further, the fresh juice is boiled, kept cool and yeast is added for fermentation in the preparation of alcoholic drinks like brandy. The alcohol is distilled after 4 days.
Potash from Cocoa pod husk  The ash obtained from the husk of the cocoa pod is made use in the manufacture of soft soap. Besides, its other uses are as fertilizer for food crops, vegetables and cocoas.
Jam and marmalade  Pectin that is used in the manufacture of marmalade and jam is the extract obtained from sweating precipitated by alcohol and then it is distilled. The alcohol is recycled in another extraction.
Mulch  In gardening, shells of cocoa bean are used as a soil conditioner or as mulch
Cocoa Butter  Chocolates are made from cocoa butter. It is used to a great extent in the cosmetic products, like soap and moisturizing creams.
Cocoa powder  In most of the food products we use cocoa powder, for instance, deserts flavored with chocolate, drinks, flavored with chocolate and even flavored deserts like mousse and ice cream flavored with chocolate. Biscuits, cakes, sauces, chocolate spread and the like.
Cocoa liquor  Chocolate is manufactured with cocoa and other ingredients. Liquor is a liquid form of pure cocoa, produced from cocoa beans.

There are more than 1500 varieties of pests living in Cocoa, but just 2% of them are economically significant. Even when we plant cocoa in a different location, a pest that was not seen earlier is likely to attack it. Helopeltis and Mirid bugs are the well known insect pests that attack cocoa plants. In Indonesia and Malaysia, the main cocoa pest is the cocoa pod borer. Even though Mealy bugs are normally harmless, they are a popular virus of cocoaBy planting different varieties of cocoa that give pods when the season is dry we avoid diseases; In order to prevent the spreading of diseases, remove the pods having symptoms of diseases. This is done by applying fungicides having copper in them.