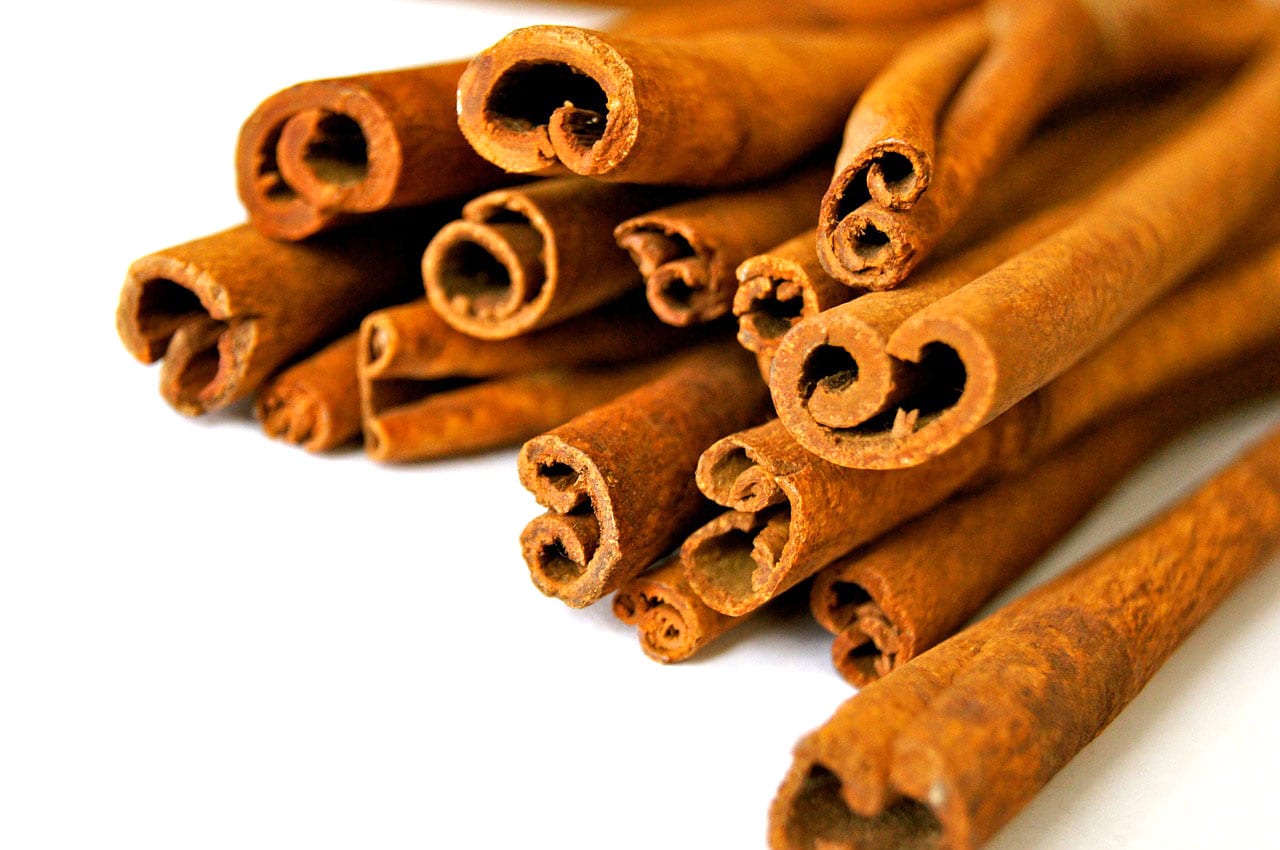 The dried inner bark of a particular tropical evergreen tree Cinnamomum verum is called Cinnamon. From ancient times, it was used as a spice in savory foods as well as in sweets. Cinnamon bark is one of the few species that can be consumed directly. It is derived from the trees of genus Cinnamomum. It is available in the form of chips, rolled in the form of sticks or in powdered form. There are hundreds of types of cinnamon, but in the International market, Cinnamomum verum is usually considered as the “true cinnamon”, whereas the others are distinguished by the name cassia. Cinnamomum Zeylanicum was the old botanical name for this plant, mainly derived from the word Ceylon, Sri Lankas earlier name. Cinnamon in early days was considered very highly prized and even regarded as a valuable present among kings and monarchs. In ancient inscription records, cinnamon has been used as as offering for the Greek god Apollos temple at Miletus. In the 17th century, the over demand for cinnamon led to a war between the Dutch and the Portuguese on the island of Ceylon where much of this spice was grown. In the early 2000 BC, cinnamon was imported to Egypt. For centuries, the source of cinnamon was a mystery in the Mediterranean region, as the middlemen in the spice trade kept it as a trade secret and enjoyed the monopoly. Cinnamon is mainly grown in Sri Lanka, the Malabar Coast of India, Bangladesh and Burma. In 1767, a cinnamon estate was established by the British East India Company near the Anjarakkandy area in the Cannanore district of Kerala, making it Asias largest cinnamon estate, and it was called the Anjarakkandy Cinnamon Estate. There were also many processing units to make cinnamon strips. Traditionally the inner bark of cinnamon was bruised with a brass rod and then it was easily peeled off from the tree. Later the bark was processed and cut into long strips, which were rolled into quills by hands and then dried well under the sun. The essential oil was also extracted by roughly pounding the bark and softening it by washing in sea water and then quickly distilling the whole. In the early days, Greeks used cinnamon to flavor wines. The Egyptians used it in their recipe called Cipher. They also used it as an embalming agent. Cinnamon was also used in other countries like Portugal, Indonesia, and the European countries.

Cinnamon is a semitropical evergreen tree and a wonderful indoor container plant which can grow to about 4 to 5 feet long, indoors, and about 20 to 30 feet outdoors. Its leaves are thick and oval shaped which can reach about 4 to 7 inches and have a dark green color on top and light green below. These trees have strong branches and yellowish, smooth and thick bark. Both leaves and bark have a spicy, aromatic scent. The flowers are small and yellowish-white in color and have a very unpleasant smell. Its fruits are oval shaped, like a berry, with a dark purple color. Cinnamon tress lives for 30 to 40 years in the wild.

Cinnamon is grown widely in countries like Indonesia, India, China, Vietnam and many other countries. But Sri Lanka is the main exporter of Ceylon Cinnamons. It is also cultivated in Brazil, Sumatra, and in Mauritius too.

Cinnamon plants are hardy and can be cultivated in any tropical condition like wet, intermediate or even dry zone. All types of soils are suitable for cinnamon cultivation, but to harvest the finest cinnamon with its characteristic flavor and color, some growing conditions must be followed. For example, well drained soil, rich in humus content is most suitable. Cinnamon in Sri Lanka is cultivated in all types of tropical conditions in different types of soil like loamy, gravely, laterite and sandy soil. Even red, dark brown soil free from rock, gravel is also good for cinnamon cultivation. Cinnamon can be propagated by seed, cutting and division. If planting from seed, in a space of 3 x 3 m, dig pits of about 50 cm depth and fill them with compost and about 22 pounds plus topsoil. It should be watered twice a week during the planting period; hence planting it during monsoon will help the seeds to establish well. Seeds, around 4 or 5, can be sown in each pit. Cinnamon tree barks can also be harvested from the branches that are at least 2 years old. The tree stems are cut at the ground level and the following year, many shoots will emerge from the roots and replace the pruned ones.

Liquid fertilizers can be applied once a month during the growing period. Trimming can be done any time; prevent the plant from growing too tall. Over watering can also cause root rot. Cinnamon spices should be placed in a cool, dry place. The powdered cinnamon should be stored in an airtight container and refrigerated.

Cinnamon requires regular watering, especially during the planting period. It may require daily to twice weekly watering, depending on the climate. Experts suggest that the soil should be let dry between the two watering. Over watering can kill the seeds. Young specimens need special care while watering and while using fertilizers. Once it grows, rainwater will be sufficient.

Cinnamons are best grown in hot or humid climates with sufficient annual rainfall ranging from 1250 mm to 2500 mm. For the best quality cinnamon, the temperature should be around 20 o C and 30 o C and the region should be 300 to 350 meters above the sea level.

More commonly, Cinnamon is known as a spice. It enhances the flavor and aroma of dishes. Other than cooking, it is also used as antiseptic, stimulant and carminative. Essential oil made from cinnamon is used as anti-fungal, antibacterial as well as a uterine stimulant. Several studies have proved that consuming cinnamon daily may reduce cholesterol and blood sugar levels. It also has some powerful chemicals that help to reduce ailments like…
It reduces indigestion, irritable bowel syndrome, ulcer, constipation etc.
Cures common cold.
Controls the body from the aftereffects of consuming high fat food.
Gives relief to muscular injury.
Prevents tooth decay.
Prevents heart diseases.
Cure pimples.
Helps to reduce weight.

Usually there is no pest problem in cinnamon cultivation, however, in some places in Sri Lanka, cinnamon cultivation have experienced attacks by minute arthropods. It damages the cinnamon leaves by forming galls and causing a decline in the production of leaf oil by 20%. These pests can be controlled with a systematic insecticide.