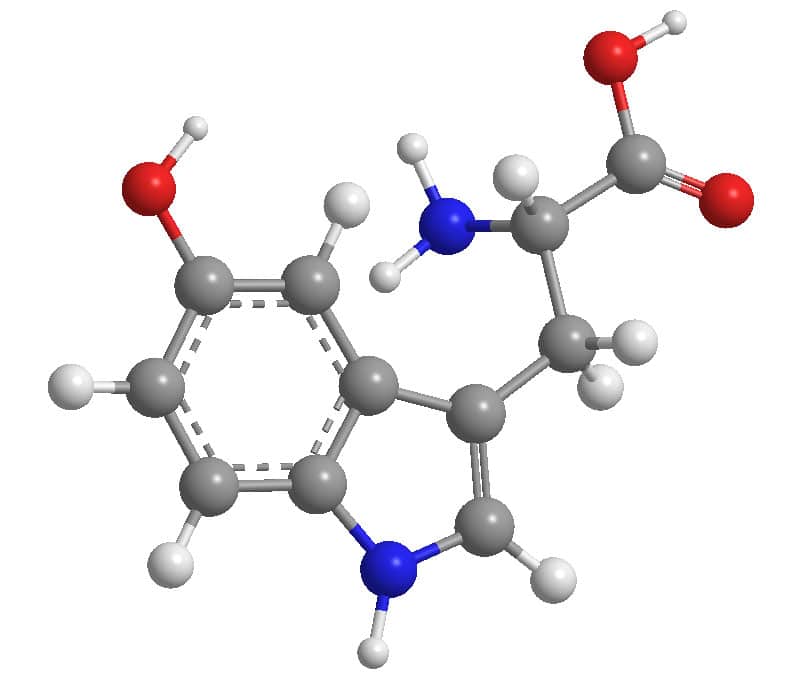 An immediate precursor of the monoamine neurotransmitter serotonin is called as 5-HTP (5-hydroxytrptophan). In the regulation of moods, appetite and the body temperature, Serotonin plays a vital role. Many disparate conditions like depression are linked and connected with the deficiency of serotonin. Other conditions like Anxiety, Suicidal Tendency, Violent Behavior, PMS, Compulsive Gambling, Insomnia, Affective disorder (seasonal) and headaches are also due to the deficiency of serotonin in the brain. Like people are transported on a bus the nutrients must find access between the brain- blood barriers. They should be ferried with the help of specialized molecules. This process encounters a small bottleneck in the passing of the serotonin. Serotonin can never pass on its own through the brain-blood barrier. The transport should happen with five amino acids  Valine Isoleucine, Leucine, Phenylalanine and Tyrosine; this should happen with the help of the precursor, Tryptophan which must share its transport with those amino acids. In all the diets, whether it is a vegetarian or non vegetarian diet, Tryptophan is the less plentiful of all the 20 amino food acids. In a competition to avail transportation through the brain blood  barrier the tryptophan is always outnumbered with a ratio of 9:1. If we eat a diet that is high in proteins to increase Tryptophan, that will only lead to a high competition. A typical and staple diet will give you only 1to 1.5 grams per day. Carbohydrates are the lone source of increasing tryptophan. A low protein will also help in increasing tryptophan in the brain. The more carbohydrates we take, the body will produce more of insulin hormone and thus the blood sugar will be reduced. Along with the lowering of blood sugar 5 amino acids that are in competition with the Tryptophan are also cleared, as a result of which a lot of Tryptophan reaches the brain.

5-HTP is called Oxitriptan. The chemical precursor and amino acid are a natural occurrence. The biosynthesis of the neurotransmitters, Serotonin and melatonin, derived from Tryptophan and the Ametabolic intermediate are also a natural occurring. 5-HTP is sold in many countries like Canada, and the United Kingdom. They are sold as sleep aids, antidepressant, appetite suppressant and also used as a dietary supplement. They are sold in many in many countries and they are well known antidepressants in many parts of the world. They go under several trade names like Tript-OH, Cincofarm, Oxyfan, Telesol etc it has been proved clinically that the 5-HTP is effective in treating depression. There have not been any good studies conducted to prove their effectiveness. Such studies are not conducted due to paucity of funds.

The effect of the medicine can be worsened if you are already into medicines that make you sleep. You should always make sure that you consult a doctor before taking a 5-htp. Extra care has to be given if you are taking this medicine along with sleeping pills, narcotic medicine, muscle relaxer or any other medicines for depression, anxiety or seizures. There can be reactions if these medicines are used along with other medicines. All the interactions are not listed in the product guide.

There is a great demand for the 5-HTP medicine as people these days are very much affected by depression. North America is the global market for the product. This is the report given by Transparency Market Research. The study also gives us information on the restraints, opportunities and drivers. They also give us an idea about the impact on the market. We can get a detailed study about the demand of the product from this.

This product 5-HTP acts as an intermediate in the natural synthesis of the amino acid, tryptophan, with serotonin.

The Advantage of Using Herbal Medicine

5-HTP has been tested in animals and humans. The safety and the efficacy of the medicine have not yet been proven. In Certain serious conditions one should consult a doctor.

People who have difficulty in walking have benefited by the use of 5-HTP. The latest reports regarding this is mixed.

People who suffer from obesity have also benefited by the use of 5-HTP. The intake of this medicine reduces food craving and fosters reduced eating behaviors, lessens the intake of calories. Weight loss is also promoted among individuals by the intake of 5-HTP.

We cannot reach a conclusion, but researches have proved that people who use 5-HTP find reduced withdrawal symptoms.

5- HTP is an effective medicine for anxiety, but we still lack effective evidence for a firm conclusion.

5- HTP is an effective medicine for the treatment of depression. Still, we need effective proof to know if they are as effective like other medicines for depression.

Various neurologic disorders and panic disorders are being treated by the use of 5-HTP, still additional conclusions are needed.

Parkinsons disease is a neurological disorder. People tend to develop Parkinsons after the age of 50. Degeneration of the brain cell that manufactures dopamine is in the brain, is the cause of the disease. The symptom of the disease is shaking of the body. There will be a difficulty in movement and coordination for those people who suffer from this disease. A combination of drugs along with 5-HTP is effectively given as a treatment for Parkinsons disease. The safety of the medicines has not been effectively proved till date as they have not been tested on humans.

Several side effects have been reported from the use of 5-HTP, including abdominal pain, agitation, want of menstrual bleeding, aggressiveness, depression, anxiety, anorexia, drowsiness, eosinophilia, gastro-intestinal problems, gas, fatigue, heartburn, hand wringing and the like.