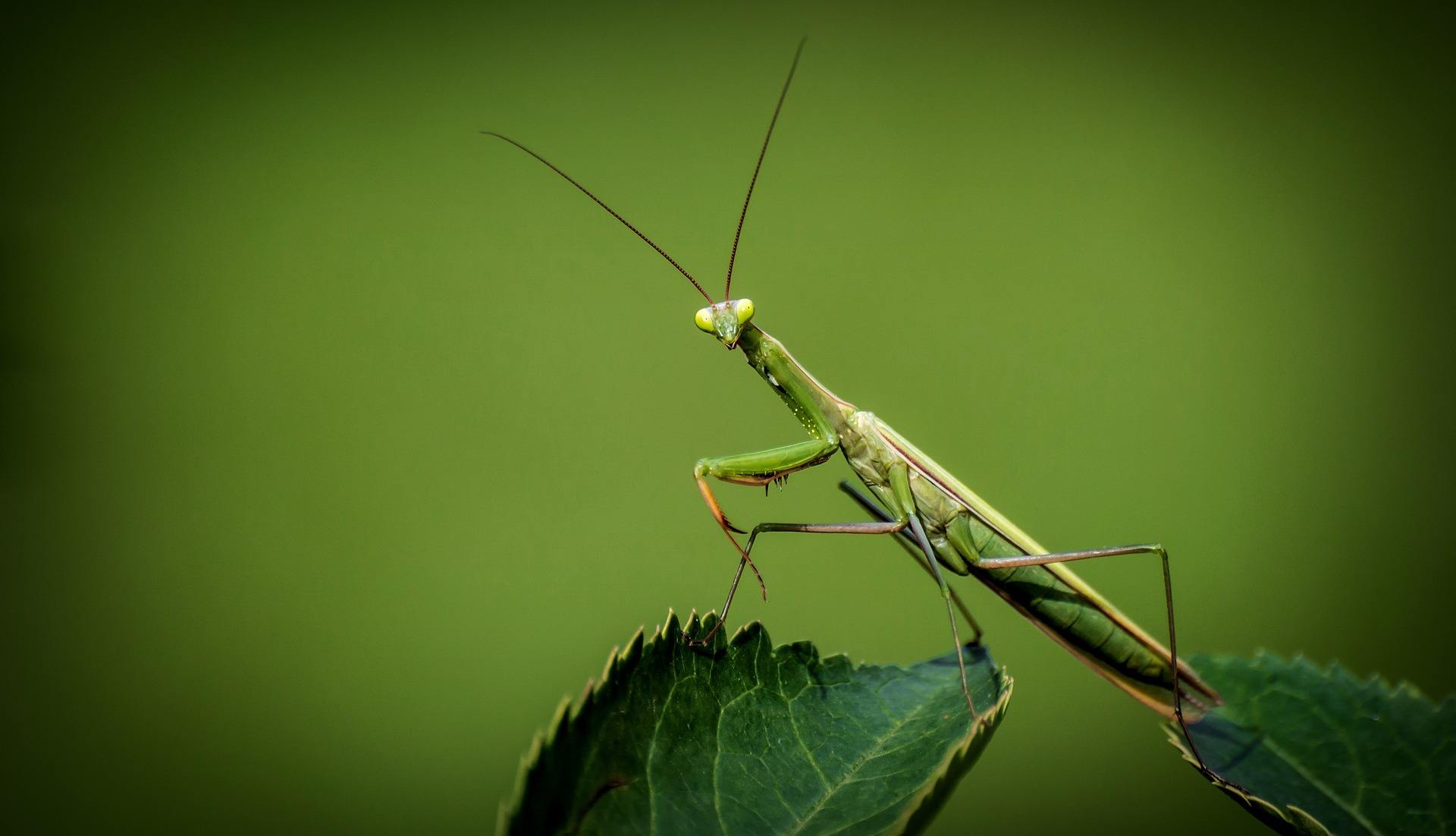 Carnivorous and infamous, the praying mantis devours anything of suitable size it can find, including several insects, bees, humming birds, crickets and the like. This article provides basic information on, ”Praying mantis fact,” including its anatomy, color, habitat, what they eat, camouflaging, their life cycle and domestic breeding. These insects exhibit cannibalistic tendencies while mating, when the female rips off the head of the male, and later on, proceeds to eat the body in the throes of the mating process. The insect gets its name “praying mantis”, from its posture of folding its two front bristly forelegs in a folded praying position.

The Head, Eyes, and Antennae: The head is triangular and can move 180 degrees each way, giving the insect a mega 60 foot view all round. The eyes are compound, made up of hundreds of lenses that distinguish image and color. Additionally, the three eyes located between the antennae, help to differentiate between light and dark. The two slender and long antennae use the sense of smell to locate food. The teeth are sharp and enable the insect to chew on its prey, before eating.

The body: An exoskeleton made from plates, joined together with an elastic tissue that allows for movement, covers the whole body, including the eyes, like armor.  The abdomen is long, and an adult sports wings. Three pairs of jointed legs including the spiny forelegs that help to catch and hold the prey, as well as the wings, join at the thorax.

Most praying mantises are either green or brown in color, but depending on the species, you can find them in colors ranging from faint green to pink that you can see among the flowers in the tropical regions. This information contributes to some of the “praying mantis facts.”

Most praying mantises like a warm and humid environment, and consequently you can find them in abundance in the temperate and tropical areas of, South America, North America, some parts of Europe, Australia, South Africa and Asia. For a search nearer your home, look for them in the parks, open areas with vegetation or flowers or some forests in your proximity. However, come fall, in September and October, you will find them rushing to your porch lights.

What They Feed On

The larger ones of the species reach sizes of three to four inches in length, in rare cases you can find one even 12 inches long, and they feed on small lizards, rodents, frogs and even birds. Their camouflage assists in their hunt for prey when it comes within the reach of its fast and reflexive spiny forelegs. The smaller ones of course feed on other insects like flies, crickets and the like.

The praying mantis is an expert at camouflage. For them, this is a serious protection against the numerous predators like the larger birds and the bats. You will find it extremely difficult to discover a flying mantis in its natural camouflaged habitat.

A praying mantis has an average lifespan of about 12 months, and only six months as an adult. Breeding takes place mainly in summer and its Life cycle follows a three-stage plan. They are diurnal insects, working and hunting only during daytime.

Eggs: Starting from its notorious sexual cannibalistic mating, where the female makes a meal of the male after mating, the females, after fertilization of the egg, lay 10 to 400 eggs on the vegetation in its habitat. A frothy secretion that the mother mantis releases from her abdomen covers the eggs as a protection against the vicissitudes of the weather.

Nymphs: When the nymphs or the baby mantises come out of the ootheca in spring, many of them become the unsuspecting prey to their own mother, while the lucky ones survive on small insects, aphids flies, and small grasshoppers.

Adulthood: They start their journey to adulthood in summer, and molt or shed their exoskeleton 12 times before becoming a true adult. When threatened, they stand tall with; fanning wings open mouth and spread out forelegs to look larger than their actual size.

Continuing with the various attributes of the praying mantis fact, most hobbyists confirm that the praying mantis is a very docile insect, except when it is mating, and is an excellent pet if you can rear it as directed. A praying mantis bite is harmless to humans. A 3-4 inch mantis only needs a tank of 12 x 12 x 12 inches, with a substratum 2 inches of soil mixed with peat, to keep it wet. Temperature must range from 21 to 40o C and the humidity about 60% for African praying mantis and should vary a little depending on any other species you propose to rear. You could feed them anything from aphids and fruit flies for nymphs and diverse flying insects including a rare diet of mealworms or crickets for the larger insects.