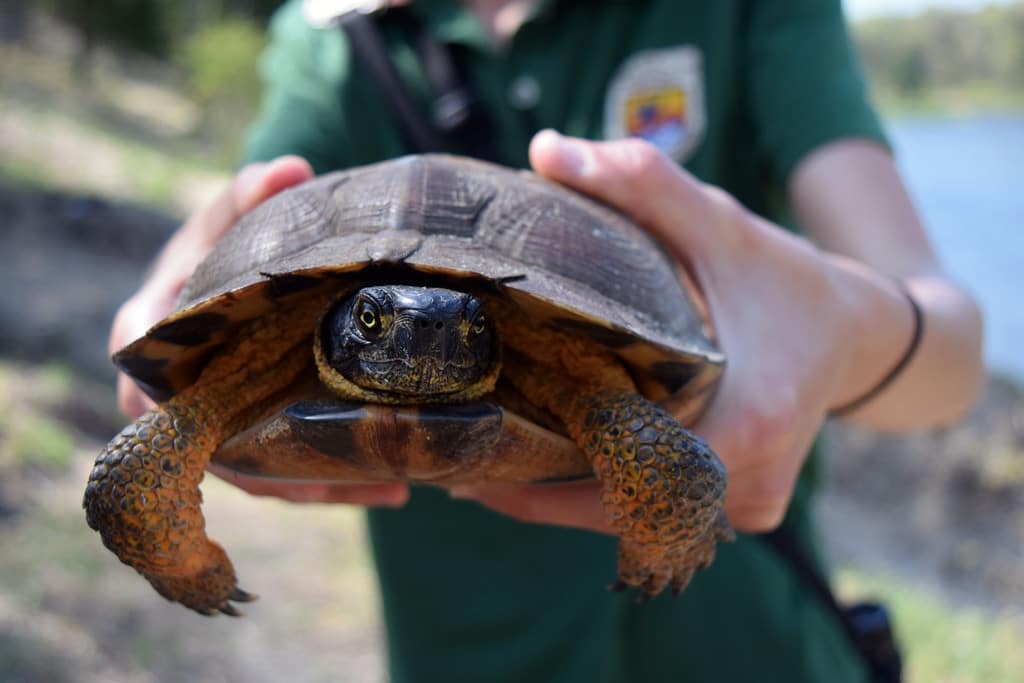 The wood turtle Glyptemys insculpta, is a turtle widespread in the continent of North America, particularly in Canada and the United States. In the west it ranges from the region of the Great Lakes and southern Quebec to northeastern Iowa and eastern Minnesota, in the east from south of Nova Scotia to north of Virginia.

The genus Glyptemys designates only one other turtle, the “bog turtle.” The carapace of the wood turtle attains a length of 14 – 20 cm (5.5 – 7.9 in). The significant feature of the wood turtle is the pattern on its upper shell, which is in the shape of a pyramid.

It hibernates during winter and in the hot summer months it undergoes estivation (a period of inactivity arising from high temperatures, when the metabolic rate is also low). The wood turtle is not explicitly territorial and is diurnal (active during the day).

We find wood turtles in habitats where the strength of their population spreads out sparsely and erratically.

The shell of the wood turtle is brown in color and looks chiseled. The growth rings on the big scutes of the shell, forms into low pyramids. Below the tail, neck and limbs, there is an orange hue. The borders on the back is saw-like, and because of this, it is often mistaken for snapping turtles, that do not have an orange color. The babies do not resemble the adults.

This species adapt themselves well to the cool-temperate climates in the regions where they are found. Each turtle adjusts its body temperature to its environment by cautiously adjusting their shells towards the sunlight, and at the same time, keeping away from the wind’s direction.

We find these wood turtles parading their terrestrial and aquatic homes from the beginning of spring and towards the end of fall. But, as soon as the temperature falls in autumn these turtles go under hibernation beneath the big streams and river. Throughout the winter season they are under water beneath the dents of the riverbanks inside the uncovered roots of the trees. They breathe the oxygen dissolved in the water and they stay underwater completely till spring. As soon as the weather turns warm, these turtles leave the water and become very active to go in search of mates as well as food. They often traverse within their habitat in the stream since the turtles, hardly leave their habitation around the river.

The female wood turtle nests in spring to the beginning of summer, she lays about 4 – 12 eggs by digging soft soil adjacent to the river banks or spots or where the soil is loose. By the end of summer or the fall, these eggs hatch after an incubation period of 60 – 65 days, and these hatchlings either come out of the egg or stay in the nest to hibernate in winter. When the young ones come out, they are 1.5 inches long and very hostile little fellows.

Wood turtles are semi-aquatic; they spend their time noticeably on land and in water. The presence of these turtles depends mainly on the clean streams having cobblestones or gravel at the bottom, for example, slow-moving streams. To avoid harsh respiratory infection, place a filter in your turtle’s enclosure because most of the water bodies hold concentrated ammonia. You can avoid respiratory infections by using a high and powerful pump that forces large amounts of oxygen in the water. More oxygen in the water propagates more quantities of good bacteria that reduce the ammonia and protect your turtles against illness.

A few of these turtle snack on fish, but normally they dislike fish. Their inclination is more towards earthworms or night crawlers. In the aquariums, these turtles flourish well when you feed them with hot dogs, boiled chicken, ghost shrimp, insect larvae, beef, canned dog food, beef, Friskies cat food (either dry or wet) Reptomin or Aquamax, blueberries, banana, cantaloupe, corn, romaine lettuce, apple, watermelon and strawberries.

In order to process the dietary calcium of your turtles a full spectrum of UVB lighting is essential. The lighting also supports breeding for your turtles. Promptly clean up the leftover food or fecal matter, often in a week. Provide fresh water always and change the bedding every month. Use a suitable reptile cage cleaner to clean up the aquarium from inside. Wash your hands after handling your box turtle daily.