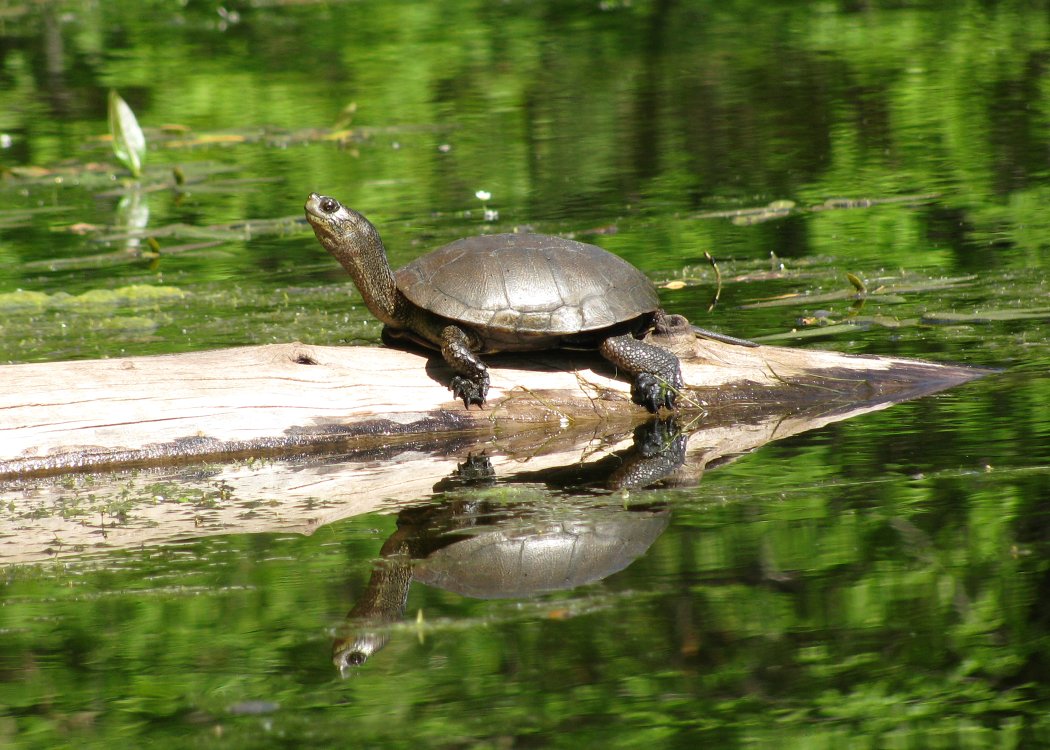 The Pacific pond turtles or the amazing western pond turtles belong to the species Actinemys marmorata / Emys marmorata. They are small or medium in size. They grow nearly 20 cm or 8 inches in shell length. We can find them only in America’s west coast areas and in Mexico. They range between northern Baja in California to Washington. The “Canadian Species at Risk Act” In May 2002, declared the Pacific pond turtle eradicated in Canada.

The dorsal area usually has darkish brown or olive color. They may appear without darker streaks. The yellowish plastron sometimes exhibits dark blotches in the center of the Scutes. The shell is 11 to 21 cm or 4.5 to 8.25 inches long. The dorsal shell, or the low and broad carapace is widest behind the middle. In adults, it is smooth without a keel or notches. Adult Turtles exhibit sexual dimorphism. The males have a light or pale yellow throat.

The Pacific pond turtles originally ranged from the northern Baja in California to Mexico and Puget Sound region of Washington. They have an uneven distribution in the Northwest region. There are a few isolated populations in southern Washington. You could also see them locally in some streams, ponds and in the rivers of Southern Oregon. You can find these turtles in heights ranging from 305 m or 1,000 ft in Washington, to around 915 m or 3.000 ft in Oregon. You can find them also in the Santa Cruz Mountains in the Canyon-filled areas of Uvas in California. Western pond turtles exist in perennial and seasonal waters also, which include marshes, lakes, ponds, rivers and streams. These turtles sun themselves on top of water plants or position themselves just below the surface of the water where temperatures are higher. Individual turtles exhibit aggressive nature towards each other while basking in the sun. These turtles will quickly dive off basking sites when humans approach them. This happens even at distances, even over 50 m. As a result, we tend to overlook Western pond turtles often in their habitats. Observation of resident turtles, is possible only if you make slow movements, hiding behind bushes and trees.

These turtles look for sanctuary in the deep water, lurking under the sunken tree-trunks, rocks and fissures. You can coax these turtles into using artificial basking substrate, or even rafts that will help to detect these turtles in their complex habitats.

Western pond turtles eat anything, and much of their animal diet consists of insects, crayfish and other invertebrates that live in water. They eat Fish, frogs, puss, tadpoles, etc. Occasionally they will eat carrion whenever available. Lily pads, tule, filamentous algae and cattail roots compose their vegetarian diet. Female Turtles usually lay 5-13 eggs in a clutch once or twice in a year. They might travel considerable distances from water for the place of laying eggs, journeying as much as 0.8 km (1/2 mile) from and further up to 90 M or 300 ft above the nearest water source. Most nests are within 90 m or 300 ft of water. The female of the species, as a rule, leaves the water in the evening and may roam a bit before choosing a nesting site. Often, they nest in an open area of sand or hardpan or a dense layer of soil that faces southwards. The turtles build a flask-shaped nest with an opening of about 5 cm (2 in). The females spend a lot of time covering up the nest with earth and adjacent small plants, making it difficult to discover the eggs unless a predator disturbs it.

Some hatchings seem to overspend winter in the nest. This phenomenon seems more common in northern regions. Winter rains may help to loosen the hardpan soil (a solid layer of soil below the topsoil layer) where the turtles locate some of the nests. It may be that the nest might be the safest place for hatchlings to seek shelter while they await warm weather conditions. Whether it is hatchlings or eggs that overwinter, young turtles first appear in the spring following the year of egg -laying.