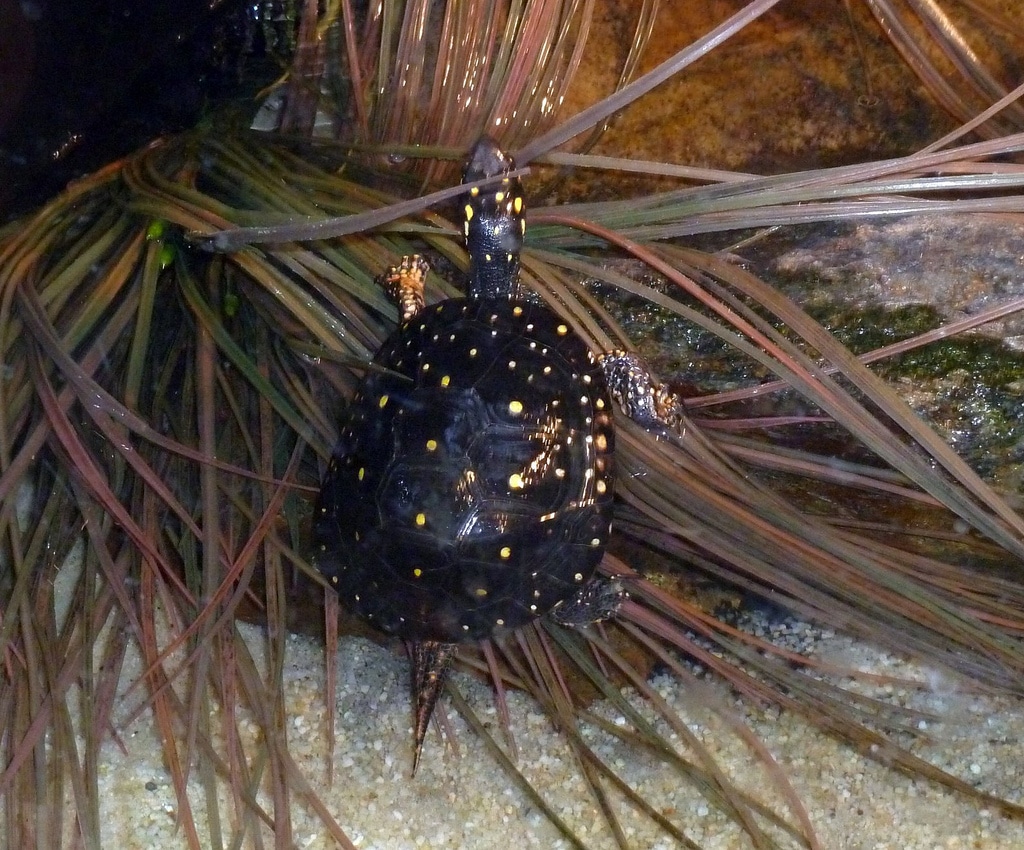 The turtle, Clemmys guttata, or spotted turtle, is a tiny amphibious creature, covering a height of about 8-12 cm (3.1-4.7 in) when mature. The spotted turtle (Clemmys guttata) also goes by the name of “polka-dot”, because of yellow spots, all around the body; legs, neck, upper shell and head as well, the background being black in color. The dots vary in quantity, and arrangement with age. While the young ones have one spot per plate, the adults have at least 1000 or more spots, except a few ones having only yellow-orange marks on face, and the entire body being spotless. The plastron is usually yellow and black. The adult mature males have dark pigments on both jaws, while the females tend to have yellow texture, both measuring around 3.5 to 5.0 inches approximately.

The basic features of the turtle are its black colored head, rough upper jaw and a huge orange patch on either side of the head. You can also see numerous yellow bands, with the dorsal skin black and full of coarse yellow patches, and the ventral skin brighter in appearance, ranging of colors like pink, orange and red. Usually, the spotted turtles start swarming mainly from the month of March-October. You can often see them alone or in clusters bathing in the sun. As soon as the breeding season sets in, during March-May the adult males start hunting for females. Once the female is ready for mating, she allows a male to climb on her back, clutch the shells strongly, place his tail next to her and mate. Often several males pursue one female for mating.

At the end of the swarming season, the female turtles move towards the nests by leaving the breeding pools and often die on the path during the search. The ideal nesting sites are fields, sides of roads or marshy meadows. The females start digging 2 inches deep, and 2 inch diameter nests with her feet and hind legs during the evenings. As soon as digging is complete, the female turtle starts resting before laying eggs (3-4). Next, she wraps the eggs and camouflages them by accumulating dirt from the field. After 11 weeks, the eggs start hatching and the 1” hatchlings start looking for food in moist, grassy and shady spots. Typically, the adult turtles become sexually mature in about 8-10 year, and lives for minimum 25 years, with a few exceptions that live until 50. Turtles prefer tiny worms, snails, spiders and slugs and they like sun bathing during day time, spending the evenings and nights at the bottom of small water bodies.

The spotted turtle are endangered species in Illinois and Ohio, under serious threats in Vermont, Maine, under special responsibility in Indiana, and specially shielded in Massachusetts.