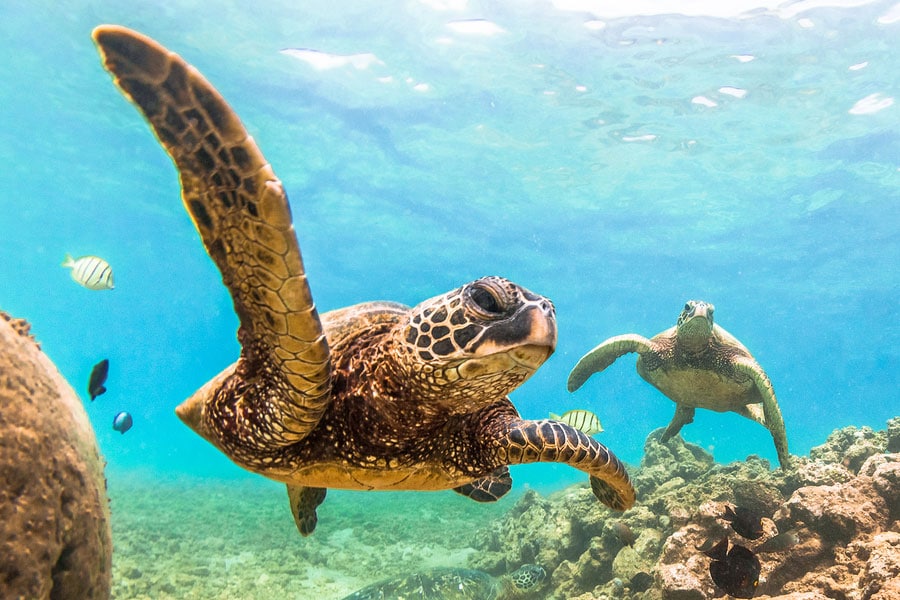 Sea or marine turtles fit into the super family “Chelonioidea” and also go by the name, “marine turtles” belong to the category of reptiles called Testudines. In these, you can find seven species that add to the sublime elegance of the ocean waters in the sandy shores of the Eastern Pacific Ocean as well as the multicolored Coral Triangle reefs to the superficial beds of seagrass of the Indian Ocean. They comprise of:

For over 100 million years, these sea turtles have traversed great expanses to the corners of the oceans of the world and shouldered a vital function, maintaining the balance in the marine habitation.

How Sea Turtles Form a Basic Link in the Marine Ecosystems The crucial link in the marine ecosystems is the Sea Turtles. These marine turtles play a key role in sustaining the coral reefs as well as the beds of sea grass that benefit in the propagation and trade of the priceless species of tuna, lobster and shrimp. The sea turtles are the living agents of a family of reptiles that have survived on the Earth and also traversed in the oceans for the past 100 million years. Turtles enhance the cultural consequence and add value to tourism.

The excessive human activities in the ocean have restricted the life of these aged mariners. Most of the varieties of sea turtles now belong to the endangered class. People slaughter them for their eggs, shells and skin. Sea turtles are victims of poaching and exploitation beyond limits. The indiscriminate destruction of their habitats and accidental capture by fishing gear are some of the reasons for the rapid reduction of their life span. Another factor is the climate change that has a great impact on the sites where the turtles nest. It changes the sand temperature that ultimately affects the hatchling’s sex.

Sea turtles have traversed land and sea and have swum across the oceans for thousands of miles in their long life, always facing innumerable threats to their life. They delay their reproduction for decades, to reach back to the beach in which they are destined to lay their eggs, and only a few of them will produce hatchlings that can survive the initial year of their life. Besides these considerable natural confrontations, sea turtles also face numerous threats by humans.

All over the world each year, hundreds and thousands of sea turtles unintentionally fall in the long line, hooks, shrimp trawling nets and the fishing gill nets.

Capturing the sea turtles unintentionally is becoming a great threat specifically to the endangered varieties such as the green turtles, leatherbacks and the loggerheads. They need to come to the surface of the waters to breathe and when they fall into the nets, they drown, as they are unable to breathe. These dangers are on the increase as fishing activities spread out.

Without any break, sea turtles undergo continuous harvest for food and trading of their body parts. For a great majority of people worldwide, turtle meat and eggs are a means of income and food. At times, some of the people kill turtles for religious ceremonies and for medicine. Tens of thousands of sea turtles lose their lives in this manner each year, the endangered species like the hawksbills and greens suffer immeasurable destruction.

Slaughtering turtles in the international and domestic markets continues. Even though prohibition of the endangered species of sea turtles and their body parts is prevalent under the Convention on International Trade in Endangered Species of Wild Fauna and Flora (CITES), illegal trading continues.

For nesting, sea turtles rely on beaches. Worldwide, the nesting of sea turtles is either destroyed or disturbed on account of vehicle traffic on the beaches, unorganized development in the coastal areas and various other human interferences. Damages and destruction result from nutrient runoff from agriculture and sedimentation from the clearing of land and other activities on the shores where the turtles feed on sea grass beds and coral reefs. Every change in the environment and the temperature has a significant impact on the sea turtles life as well as it’s hatchling’s sex.. The general ratio of the sea turtles suffers disruption on account of the drastic climate change and abnormally warm temperatures; as a result of which the number of male hatchlings stands considerably reduced.

Sea turtles occupy the subtropical and the tropical oceans the world over, they are large, air-breathing reptiles. Their shells comprise of a lower section (plastron) and an upper section (carapace). Other than the leatherback, all the other turtles have hard scales (or scutes) cover, the different arrangement of the scutes helps to distinguish their species. Sea turtles vary in color, shapes and sizes. The distinctive leatherback weighs 650 to 1,300 pounds, whereas the olive Ridley normally weighs under 100 pounds. The carapace or the upper shell of every sea turtle varies in color, display of scales, length and shape.

The sea turtles do not possess teeth, however, they have beaks like jaws, appropriately suited for the kind of food they eat. Their ears are not visible, but have skin enclosed eardrums. They have a very good sense of smell and they hear very well at low frequencies. When they are out of the water they have short sight, whereas, under water they have good vision. They are notably adapted to marine life because of their big flippers and also the streamlined shape of their body. But still, sea turtles sustain a close relationship with the land.

Female sea turtles come up to the shore to lay their eggs in the sand; hence every sea turtle lives on land when they are tiny hatchling. Study of sea turtles has revealed a lot of information on these very old creatures.

The zoologists label a large number of sea turtles to assist in getting facts on their rate of growth, the routes they take to migrate and their reproduction cycle. Study for decades, on sea turtles has acquired knowledge to a large extent. But, ambiguity still exists.

Sea turtle has captivated the interest of a lot of civilizations and people, principally in the legends and traditions. The tales of a kind ”Turtle Mother” still remain in the minds of the people of the Miskito Cays off the eastern coast of Nicaragua. It is regrettable to note that although the sea turtles enjoy religious importance they do not enjoy protection from exploitation for business and food. Earlier, millions of sea turtles paraded the oceans, but now only a tiny proportion is left.

Once the male hatchlings creep into the sea, they hardly come on the land, whereas, the females come to the shores to nest. The great majority of the females revisits the beach (natal beach) where they were born. Season for nesting takes place at different times around the planet; in the US they nest during the months from April to October. Most of the females nest a minimum of two times during every mating season; a few are likely to nest around 10 times in a season. A female will either nest alternate years or skip two years prior to revisiting, but never nest every year.

Temperature: The heat of the sand determines of the sex of the turtles. The predominant offspring is male when the temperature is 85°F (30°C); and female above 85°F (30°C).

Mating Season: according to the species March – October

When the eggs hatch some of them crawl into the ocean. But only a few grow up to adults.

These very old creatures have outlived even the dinosaurs that became extinct 65 million years ago, they existed on the planet exceeding 100 million years.

Sea turtles regularly get drowned in the nets, long lines and fishing gears. Development of coastal regions creates destruction in the nesting areas and affects the coral reefs further more artificial lights from houses and buildings divert the hatchlings away from the oceans. They mistake pollutants like plastic bags for jellyfish and gulp them. This obstructs their digestive system and thus they die. In certain countries they hunt for their carapace, meat and eat their eggs.

The range of sea turtles is the warm and temperate waters the world over, and between nesting and feeding periods, they migrate about hundreds of miles. Most of the sea turtles migrate long distances like 1,400 miles, between their nesting beach and feeding ground.

Since sea turtles live their lives mainly under water, it is not possible to gather enough information on their behavior. Most of the details about them are from watching the hatchlings and the females who come to nest and lay their eggs. Sea turtles revisit their nesting beaches where they were born. When the females, come ashore, they lay their eggs by burying their clutch after digging the ground with their hind flippers and then go back to the ocean. The young ones take a week after hatching and dig themselves up from the nest. They come out during the night, and go towards the ocean and stay there all alone till it is time for mating.