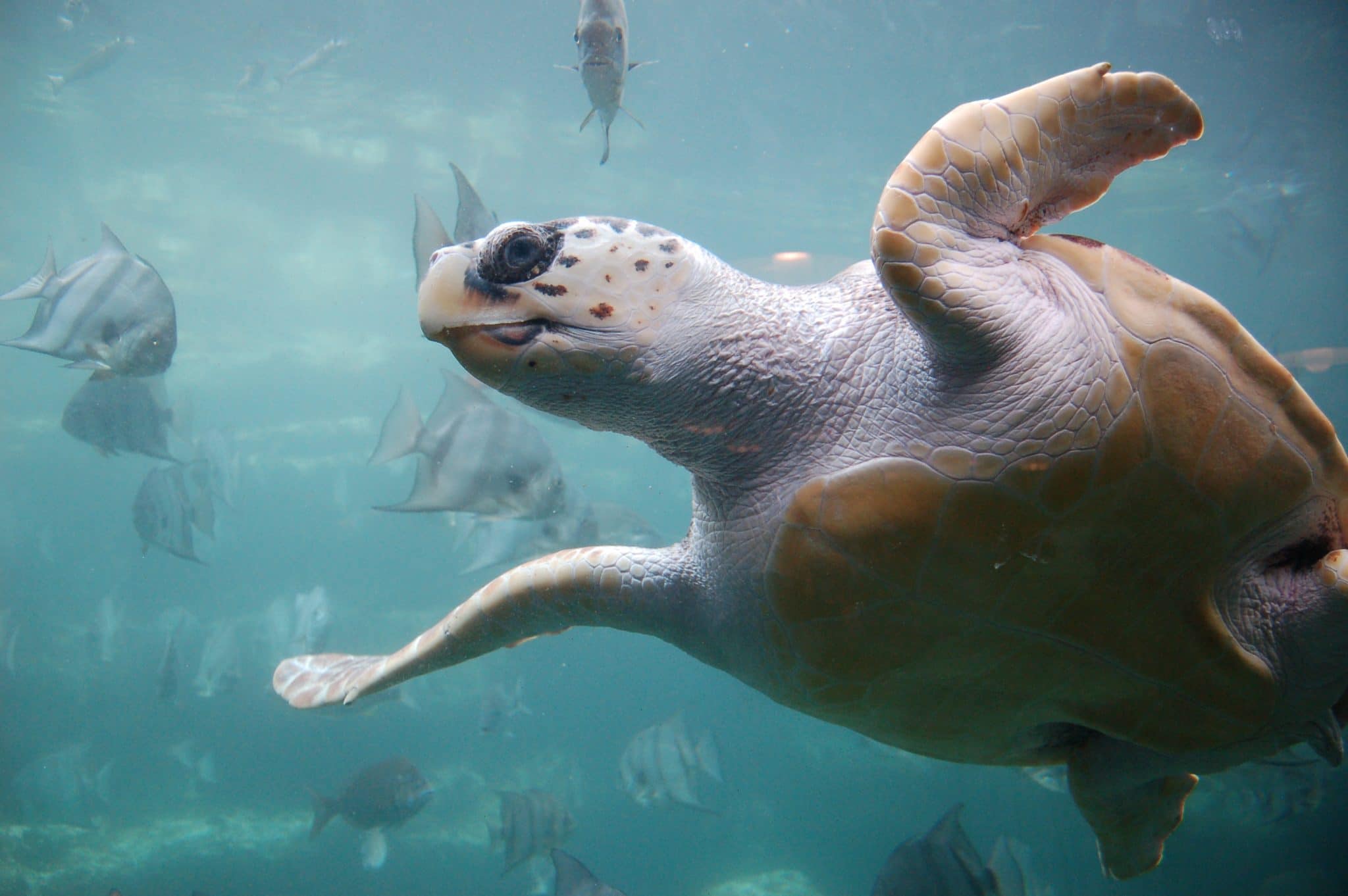 The northern map turtle (Graptemys Geographica), before called as the common map turtle, is an aquatic turtle regularly found in North America, they of the Emydidae family. The cosmopolitan distributed loggerhead sea turtles reside in the Mediterranean, Atlantic, Indian as well as Pacific Oceans. They mostly prefer living in the open ocean or shallow waters along the costs, and occasionally come out to build nests or lay eggs. The young ones, float in the mats of algae Sargassum. Both the continental shelf, as well as the estuaries serve as homes for the loggerhead turtles. While the trifling water turn out ideal for the young ones, the adults prefer locations best for nesting. Unless the nesting period, they prefer water having temperatures of around 13.3-28.0°C (56-82°F), even though 27-28°C is best for females during nesting season. The head and the upper shell of the loggerhead turtle are usually yellow-orange to reddish brown, and the underside is pale yellow. The neck and sides are yellow at the base and sides, and the above portion is brown. There are about 11-12 pairs of huge plates or scutes comprising the carapace. The scute, at the base of the head is known as nuchal scute. Five pairs of costal scutes cover the other five vertebral scutes which run along the midline of the carapace. The plastron comprises of gular pairs, femoral, humeral, anal, pectoral, and abdominal scutes. The shells of the loggerheads mainly protect them, by retracting the heads and flippers inside, whenever they are in danger.

Offshore waters near the beach are the ideal mating spots for loggerheads. The females dig the beach, for nesting above the level of the high-tide. At times, due to unknown causes, the females attempt for “false crawl” when they do not make nests. On average, the size of a clutch ranges from 35-108 eggs similar to ping Pong balls delivering 2-3 clutches each season. The incubation time ranges from about 45-65 days, and remain sexually mature for 6-7 years, nesting every alternate or third year. The loggerhead turtles seem to operate freely during daytime, both in captivity and in the wild and mostly, they are either swimming or resting at the base. Spreading forelimbs, in a position suitable for swimming, they remain stagnant with their eyes half or fully shut while they rest. They are, however, always alert. They sleep in the same inactive posture at night, with their eyes firmly shut. The female loggerheads are also aggressive towards other females in nature, unlike the other marine vertebrates.