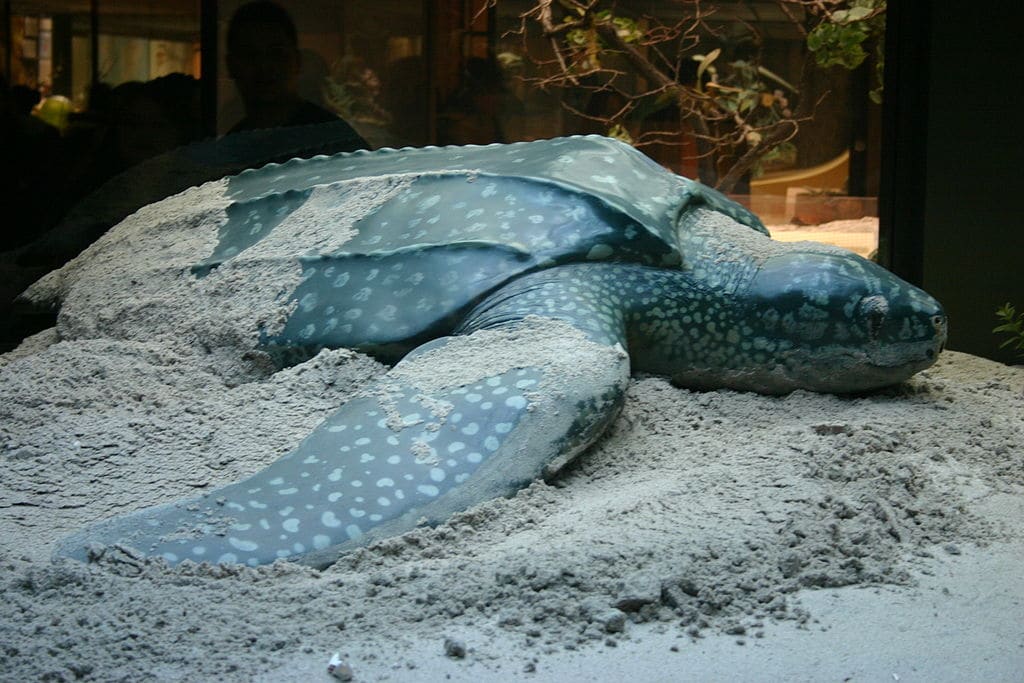 Leatherback turtles are the largest turtles that exist on the earth; they meet a length of up to 7 feet (2 meters) and weigh more than 2,000 lbs. (900 kg). These reptiles represent an ancestor of turtles whose history you can trace back to a 100 million years evolution. Once upon a time, every ocean excepting the Antarctic and the Arctic Oceans had them in abundance, but at present their numbers are systematically diminishing all over the world.

When compared to the bony and the hard shells of the other turtles the shells of the leatherback turtles are flexible and somewhat rubbery in texture and it has an inky-bluish carapace.

Size: Normal leatherback turtles attain a weight of 500 kg and 180 cm in length.

Color: This species’ shell (carapace) is dark in color with white spots.

The adult leatherback turtles are pelagic and dwell in the open oceans, even when the temperature falls below 10°C but, the juveniles remain in the warm waters where the temperature is more than 26°C, and adjacent to the coast till they grow to a curved shell length of more than 100 cm.

The distribution of the leatherback turtles exceeds all varieties of reptiles and even vertebrates. We find them in the temperate and tropical waters of the Mediterranean, Atlantic, the Pacific and the Indian Oceans. The matured leatherback turtles travel to the south as far as New Zealand and South America and north as far as Canada and Norway. Different from their reptilian counterparts, these leatherback turtles possess a special condition in their body which enables them to sustain a warm body temperature under cold water conditions, and enables them to produce as well as keep up body heat. These adaptations arise from a thick layer of fat, the variations in swimming and flow of blood and the large size of their body.

Their lifespan is still vague, since a great many of them die at an early age on account of human intervention. The experts estimate that only one of the thousand leatherback hatchlings survive up to adulthood once they are hatched. Humans take their eggs either for aphrodisiacs or as a means of living. A big number of them die on striking a boat or when they fall prey to the nets or fishing lines.

Compared to other sea turtles, leatherbacks migrate the vast distances between feeding and breeding at an average distance of 3,700 miles (6,000 km) either way. Following mating at sea, the female leatherbacks return to the shore to nest during the breeding season. During the night, they dig a hole in the sand and lay around 80 eggs, fill the nests and disturb a vast expanse of sand so that the predators cannot find their eggs. In the end the females go back to the sea.

The sex of the hatchling depends on the degree of warmth inside the nest. A facile combination of male and female hatchlings takes place when the temperature is almost 85.1°F (29.5°C). However, at cool temperatures male offspring emerge and at higher temperatures females emerge. The juvenile male turtles enter the sea, while the females enter the sea and roam about in the oceans till they attain sexual maturity and revisit their nesting grounds to reproduce their offspring.

Marine Turtles- Their Important Role In The Marine Ecosystems Leatherback turtles maintain the ecological control on the jellyfish, because leatherbacks are major consumers of jellyfish. The jellyfish consumes larvae of the fish, thereby reducing the number of fish in the ocean. If there are jellyfish in plenty in the oceans, then you will find the volumes of the commercially important fish radically diminishing.

The uniqueness in the system of the leatherbacks blood supply to their cartilages and bones, maintains their body temperature to remain many degrees higher than the temperature of the water. This helps them to bear the cold water temperature like a mammal; they are capable of deep diving up to 1,200 meters more than the other marine turtles.

Latest DNA tests find the population in the Pacific and Atlantic as a clear genetic lineage of a particular species. You will find the nesting number of Pacific leatherbacks divided into two different genetic populations (western and eastern populations)

It is significant to note that these large-sized leatherbacks feed on low protein and low energy diet comprising of creatures having soft bodies like the tunicates (“jelly fish-like” marine invertebrates), squid and jellyfish.

Illegal collection of nested Leatherback eggs from the beaches has become a serious problem with regard to these turtles’ population. Egg collection in Southeast Asia not illegal and therefore this contributes to the countless removal of eggs, thereby reducing the hatchlings in tens of thousands, and in fact, leading almost to extinction of these wonderful turtles in Malaysia. Indonesia has also witnessed a large-scale collection of leatherback turtle eggs and adult turtle killing for meat, resulting in their drastic population decline in the region. In South America, they have brought in legislation to prevent egg collection, but the trade still flourishes for commercial purposes or for sheer sustenance. Hunting of the leatherbacks and poaching for their eggs continues strongly in the Indian Ocean also.