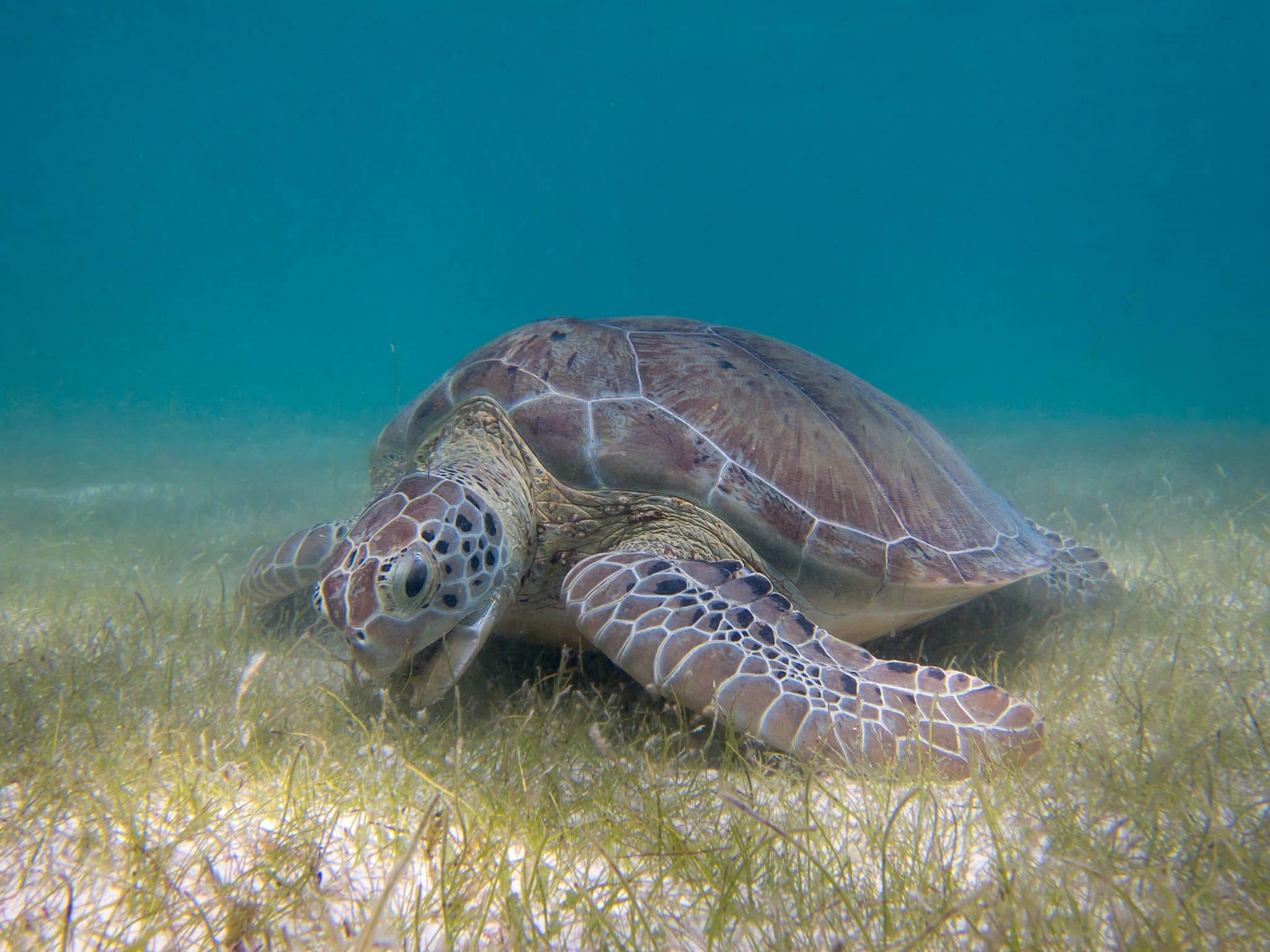 The green sea turtle, has pet names like Pacific green turtle, black (sea) turtle or just green turtle. It is the only variety in the genus Chelonia and it is huge in size, common from the Cheloniidae family. This sea turtle, Chelonia mydas, lives in the subtropical and tropical seas all around the world. The Pacific and the Atlantic Oceans are the two areas where they exist in plenty.

The Green sea turtle is a reptile; its predecessors first grew on the land. Afterwards, they moved to the ocean for survival around one hundred and fifty million years back. These turtles are one among the few prehistoric varieties that existed early enough to observe the evolution and extinction of the dinosaurs.

The green sea turtle achieves its name from the green color fat below its shell. (In certain places the Pacific green turtle also takes the name of the black sea turtle) The sea turtles have two pairs of prefrontal scales (scales in front of its eyes) but the green sea turtle has a just a single pair; so it is easy to discriminate them from the others. The body of the Pacific green turtle (aka Black Sea Turtle) has a raised tomb like appearance; the frontal part is not perfectly curved as seen in the other sea turtles. It has a small blunt head and serrated (saw like) jaw. Its body is more or less oval with a good depression (flattened). Compared to the Pacific sea turtle it has a bony carapace with no ridges, the carapace color changes from dull green to very deep green and pale yellow to very bright yellow, green and brown tones that radiate the stripes. The plastron color varies from solid white to white or yellow tint in the populations in the Atlantic. They are deep-gray-bluish-green in the Pacific population. Its four lateral scutes (scales) are large and do not overlap. There is only one visible claw in every flipper. The juveniles are either dark brown or somewhat black, with their belly and margin of the flippers white.

During the course of its life, its diet varies. Till they acquire a length of 8 – 10 inches, their diet comprises of young crustaceans, grasses, worms, aquatic insects and algae. When they grow over 10 inches in length, their diet is mainly algae and sea grass. Thus, in adulthood, this is the only sea turtle that is a strict vegetarian. Their serrated jaws assist them in stripping the vegetation.

Only occasionally we find them in Open Ocean, their main habitat is adjacent to the coastal line and around islands. They live in protected shores and bays, particularly in locations having sea grass beds.

Green turtles breed every two years, the numbers of females that breed varies to a great extent every year. Breeding takes place 3 – 5 times in a season. They lay an average of 115 eggs in a single session. The incubation period is about 60 days. Unintentional catches while trawling shrimps for commercial purposes contributes to their increased death rate. Commercial harvesting for food and eggs is the greatest threat. Parts of the green turtle go to the manufacture of leather. Stuffing small turtles is also a curious hobby for some people.

You cannot keep sea turtles as pets as they are on the endangered list and therefore it is illegal.