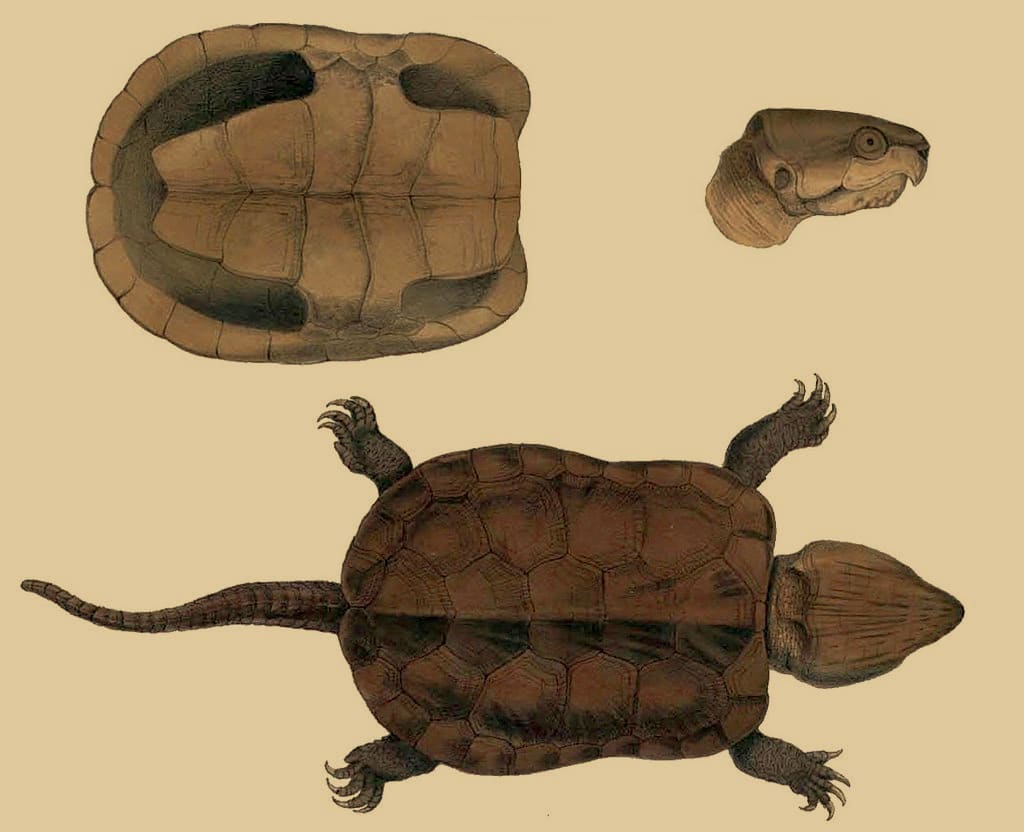 Southeast Asia as well as Southern China is the original homeland of the big-headed turtle Platysternon megacephalum, belonging in the family Platysternidae. Big headed turtle, as the name rightly suggests has a huge triangle shaped head, which it is unable to withdraw inside the shell in case of emergencies. Thus, in order to protect itself, the top and the edges of the head are coated with an enormous bony sheath, and the skull is also made of a hard bone. The upper jaw has a hook shape and is attached with another firm layering at the edge, along with the other jaw, exposing a thin layer of unguarded skin on the cheeks (from the eyes till the junctions of the mouth). The distinctive feature of the turtle is that it has an exceptional tail that is very long, with a squarish shape in front and rounding off towards the end. The carapace is usually dark brown- yellow or radiating in color and the plastron is yellow. Larges scales cover the legs as well as the tail plays the part of an extra limb, to support the weight of the body.

The big headed turtle thrives best in cold, speedy water streams and brooks that are less than a meter in breadth and 10 cm in depth. Thus, northern Vietnam, central China, northern Thailand, Lao People’s Democratic and southern Mayanmar serve as ideal habitat for the unique species. The odd creature spends most of the daytime underwater, underneath the gravel or rock crevices at the sides of the streams or waterfalls. They become active mainly during night, and hunt for food along the bottom of the water body or along the edges. The big headed turtles are excellent climbers, able to crawl through rocks rather than swimming. Being carnivorous, the big-headed turtle prefers mollusks, crustaceans and similar items.

The big-headed turtles are popular for their exceptional qualities of climbing rocks and overcoming all the adverse situations around its habitat. It uses its tail as another limb, and its beak for crawling through the speedy streams. They can also climb small trees or bushes. The tail often functions like the scorpion while it swims. The snail or fish eater uses the strong, firm jaws to protect itself as it cannot coil its head inside the shell.

The big-headed turtle has a wide demand for its flesh as it is a popular meat all across the Asia. Nowadays, they have become Endangered (EN) on the IUCN Red List, being captured with baits by the hunters.