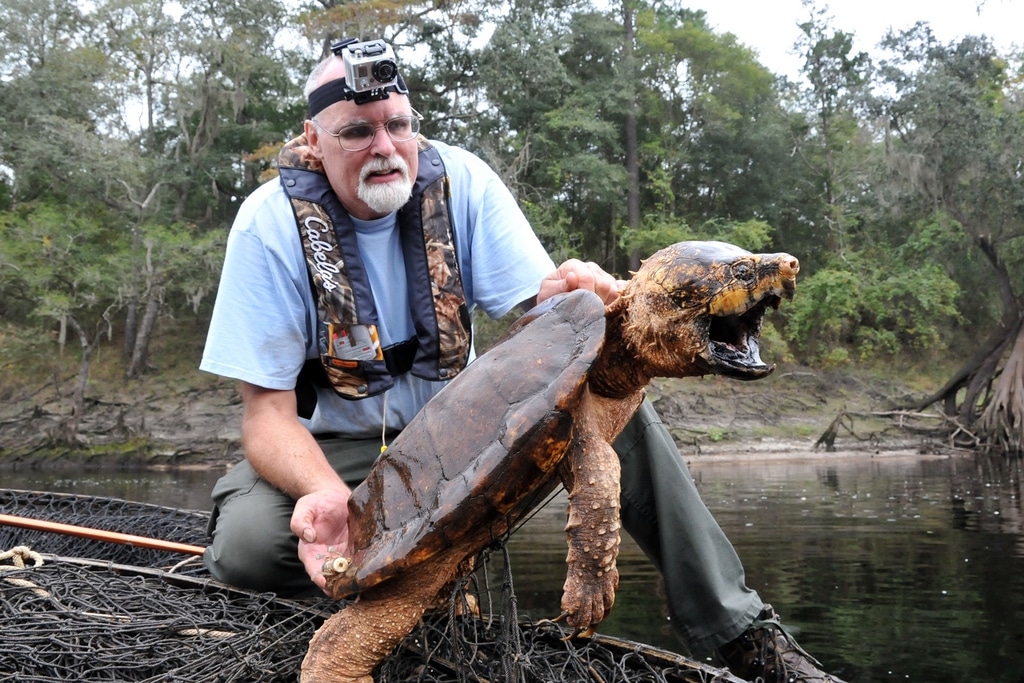 Weight is often the criteria on which one determines the size of a turtle. Accordingly, the alligator snapping turtles or “turtles Macrochelys temminckii” are the world’s largest freshwater turtle. They are associated, but only minutely with the common snapping turtle. In the macrochelys family, the alligator snapping turtles are the only existing species, whereas the common snappers belong to the Chelydra family. The alligator snapping turtle is mainly found in the waters of the southeast part of The United States. They also exist in places like Missouri, Western Illinois, from East Texas to the Florida panhandle, Southeastern lowa, north to southeastern Kansas, southern Indiana, eastern Tennessee and western Kentucky. Normally only the nesting females come out into the open land.

They attain sexual maturity at the age of 11 to 13 years. When in captivity, they live up to 70 years, but in the wild, their life is between 11 to 45 years. Alligator snapping turtles have spiky shells and a face with a prehistoric-look for which reason people call them the dinosaur of the turtle world. The typical feature of this turtle is the three large, prominent keels or ridges that run along the length of the shell from the front to the back. It has a big head with powerful jaws. What makes them different from the other snapping turtles is their eyes on the sides of the head. Alligator snapping turtles are the largest freshwater turtles. Their weight ranges from 155 to 175 pounds (70 to 80 kg).

Alligator snapping turtles are purely aquatic, they seem to stay immersed in water and stay motionless for a considerable period while algae start growing on their carapace. Other than for swallowing some air, they hardly come to the surface. Prior to coming to the surface for air, they can remain in water for 40 to 50 minutes. Other than females coming to the land for laying eggs, you hardly see these turtles on land. Their selected habitats are wetlands, lakes and river systems.

You can find alligator snapping turtles only in the United States, from north Florida extending to east of Texas towards north up to lowa.

Mating takes place during spring and the females lay eggs after two months. The incubation period is 100 to 140 days. The nest temperature determines the sex of the offspring. The looks of the new hatchlings are no different from the adults. Males grow in cool climates, while females need warmer temperatures for growth. The female alligator snapper weighs from 35 to 70 pounds and male up to 200 pounds, and their shell length is 15 to 25 inches. Therefore, they require a very big aquarium to stay. The least size for an adult is a 200 gallon. In North America, the largest freshwater turtle has a 800-gallon tank for its housing. A stock tank or outdoor pond is also fine.

Alligator snappers remain stationary for most of the time; but venture to hunt their live prey. You can feed them with worms, feeder fish, live minnows and shrimp supplies proteins. Purchased turtle food, chopped fish or cooked chicken is also good. They have a specially designed tongue that permits them to catch the prey with less effort. An enticing projection of the tongue attracts inquisitive fish to swim directly into the turtle’s mouth.

The bigger the habitat less water needed for changing. For determining the PH value, temperature and hardness, monitor the water quality. Maintain the PH value of nearly 7.0

Owing to their lively attitude and sharp jaws, handle the alligator turtle with much care. It is possible for an adult turtle to easily bite off your finger. Besides, they hurt you with their sharp claws. These alligator snapping turtles may not appear as the best pets for new keepers owners looking for a turtle as a pet because they are violent by nature. Snappers are not a good pet for some.