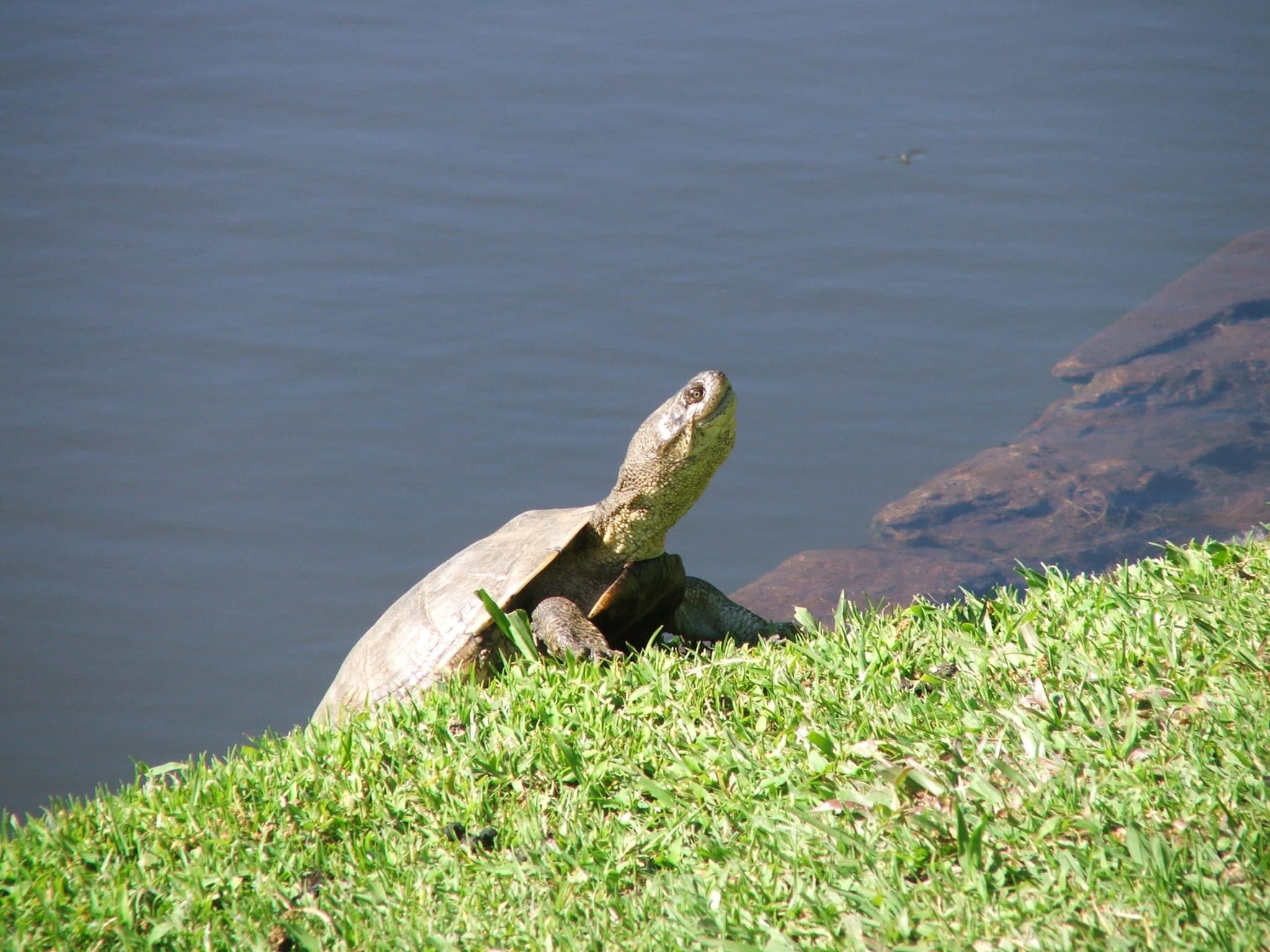 The African helmeted turtle Pelomedusa subrufa also goes by the name “crocodile turtle” or the “marsh terrapin.” In nature, you can find this turtle in the sluggish and fresh water bodies almost throughout the African continent, and also southern regions of Yemen. These terrapins are omnivorous as well as side-necked. The helmeted turtle is significantly and relatively a small turtle, most having a carapace length of 20cm, but there is one recorded specimen with a carapace length of 32.5cm. The color of its shell (carapace) is either brown or black. The top part of the limbs and the tail have a grayish brown hue, whereas its bottom is yellow in color.

The thick and long tail of the male turtle differentiates it from the female. The female has a broader shell and a short tail. The shell length of a hatchling is 1.2 inches and its color merges from olive to black color. It also possesses musk glands on the rim of its carapace and under the chin, it has a small pair of tubercles.

As an exceptional case, this turtle does not have a hinged plastron or (lower shell). All the other remaining species of the Pelomedusa family possess this trait by which they close up to cover up their front limbs and heads. Distinctly, like numerous other chelonians, the African helmeted turtles are capable of getting upright when they find themselves upside down using their long muscular necks in a vigorously flicking motion.

You can find the P. Subrufa over the vast provinces of the African continents from Sudan to the Cape Peninsula. It also occurs beyond the south of Cape Town and west of Ghana. We find them even in Yemen and Madagascar. Since they are semi aquatic creatures they exist even in the rain pools, fertilized places and dwell in marshes, lakes and rivers.

It appears they have a preference of still water bodies like lakes, dams, pans and swamps. But you can find them in less numbers by the side of rivers. Usually you cannot not find them either in the desert, mountain or forest areas.

Pelomedusa are violent with other species of turtles so never house them together. They are likely to attack and hurt or murder other turtles. Similarly, you would do well not to house African helmeted turtles of various sizes together because they will fight. Even though Pelomedusa live in rather deep water bodies, unlike the other pond turtles these turtles are deficient of the web in their hind feet. On the other hand, they prefer walking at the bottom of the water body. Therefore, keep them in tanks with the depth of water not more than 1 ½ times as long as its shell in such a way that they reach the surface of the water when they stand at the base of the water area. In case the depth of the water is more than 1 ½ times, then provide SCL shallow water resting place to prevent unintentional drowning and exhaustion. Maintain the enclosures rather bare and plain or sophisticated. Provide a place for basking and hiding places to hide as well as vision blockades to prevent violence in groups and UVB lighting as well.

Compared to the female’s head the male turtle has a very big and broad head. Copulation takes place in water, the male shakes his head and clasps the female’s shell with his feet. The African helmeted turtles nest once in every year. They dig a nest around 15 cm deep and drop the egg in it. The eggs, coated with clear slime have a size of almost 28 – 31 mm x 15 – 18 mm and weighs 4 – 6 grams. The eggs are grayish/ white in color. After fertilization, white spots develop on the top portion. The eggs hatch in 65 – 68 days. A medium clutch amounts to 7-17 eggs. When incubated at 290C they hatch in as early as 55 days.

The African helmeted turtles are timid; they are likely not to eat when they are out of their enclosure. They are carnivorous; but even the poor eaters consume food with enthusiasm when fed with live creatures like minnows, crickets, crawlers, even fuzzy and pinky mice. Once they begin eating, most of them start responding to commercial feed like Reptomin, Nasco turtle brittle, Mazuri and the (carnivore) Aquamax. They are also fond of turtle pudding.