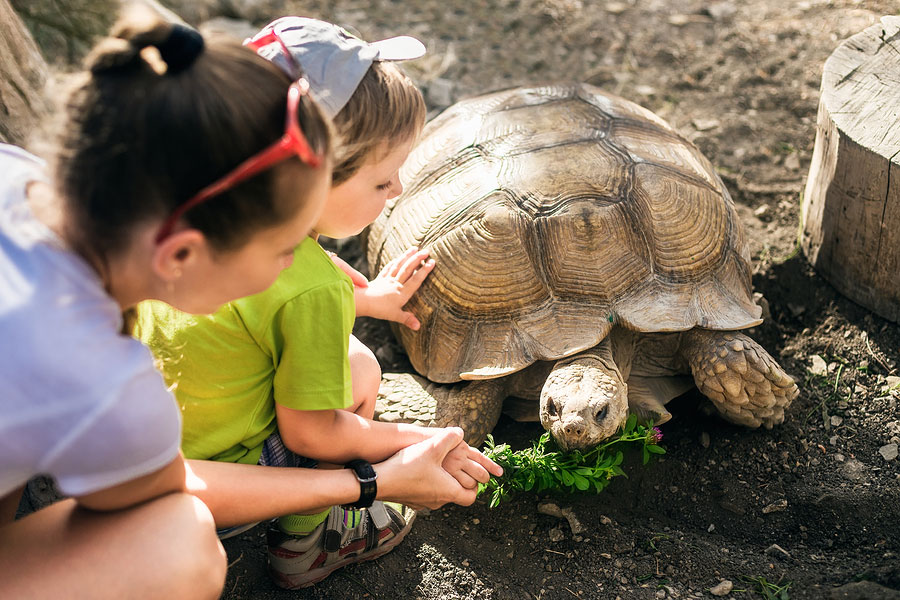 Are you ready to get the third largest species of tortoise on the planet for a pet? Remember that the Sulcata, though temperamentally ideal for a pet, still require you to make them comfortable for a long stay, be it rearing them indoors or outdoors.

It is really a pity that, notwithstanding the serious efforts of the wildlife conservation groups in their conservation, poaching them from their natural habitat and distributing them to the pet shops, especially the freshly hatched ones, in the world has become a hazard of epic proportions.

“Centrochelys Sulcata,” called the Sulcata or the African Spurred Tortoise, is endemic mainly to Northern Africa’s southern Sahara Desert’s belt and inhabits the transitional ecoregion of the Sahel that is endowed with shrubs, savannas, shrublands and grasslands that are commonly found in the countries of Sudan, Senegal, Nigeria, Mauritania, Mali, Ethiopia, Eritrea, Chad and Burkina Faso. These animals follow a system of “aestivation” when they dig burrows ranging from 30 inches to 10 feet in the ground to reach cooler moisture levels to spend the hotter parts of the day.

You may be interested to know that the Sulcata, the sole species in the genus Centrochelys, is the third largest in the world behind the Galapagos and the Aldabra, but certainly the biggest mainland tortoise.

Adult Sulcata grow quickly from their hatching size of about 2 to 3 inches to reach an estimated size of 33 inches or 83 centimeters and weigh around 231 pounds or 105 kilograms. The oldest living Sulcata in captivity was recorded as living in Egypt’s Giza Zoological Gardens at an age of 54 years in 1986. Most estimates concur that they can live up to 70 years.

The word Sulcus was obviously derived from a Latin word sulcus that refers to “furrow”, probably those found on the species’ scale.

The main diet of the Sulcata tortoises is an assortment of plants and grasses with a low content of proteins but rich in fiber content. Keep from feeding them fruits.

The ideal staple food of the matured tortoises consists of a variety of leaves and grasses, similar to their normal diet. They graze on the lawn grasses of either grape leaves, mulberry leaves flowers and hibiscus leaves. The big Sulcata consume grass hays.

The other alternative is to feed them on spring mixes (particularly while juvenile aged). These spring mixes consist of many leaf like ingredients in addition to turnip greens, collard greens, kale and some types of dark lettuce. To compensate the nutritional bases not found in many diets, the Mazuri Diet is occasionally recommended

The Sulcata are known for their pleasing personality; in spite of their major confrontations, occasionally they are reared as pets. When in confinement, they become accustomed to different habitats and climatic changes. Many novice breeders find the Sulcata to be their favorite pets because of their docile and inquisitive demeanor.

The Sulcata need big enclosed spaces with a temperature maintained around 60 degrees Fahrenheit (16oC), and beds made of hay with a grass base. The diet of these creatures is comprised of a rich content of fibers. As such, at least 75% of their food should consist of grasses. To keep them fit, it is mandatory to give them a good amount of calcium for the growth of their shell and bones, with reduced protein, less sugary foods, and fruits. The tortoises in the wild get sufficient calcium from the earth. Therefore, these pets need a supplement of calcium. The juveniles gain maturity within no time and during the initial 3 years; they grow to twice the size.

Most of the “wet” vegetables lead to severe health hazards; however, hibiscus leaves, prickly pear cactus pads, dandelions and hay of different grasses are normally secure. Few of the usual garden plants like the azaleas are poisonous for them. Pyramiding and malformation of the shells are caused when the content of protein is high and that of the calcium is low. The Sulcata are gluttonous and occasionally eat too much. A few of them absorb excess of proteins by consuming snails and caterpillars.

Copulation follows immediately after the monsoons, extending from September through November. Males fight with themselves, claiming the right to breed among the females.

Two months following mating, the females go in search of a convenient place to build their nest. Within a span of 5 to 15 days, the female unearths about 4 to 5 nests, prior to choosing the apt one where they lay the eggs.

Soil that is not compact is removed from the cavity and the females often urinate into the cavity. When the cavity attains a depth of 3 to 6 in. (7 to 14 cm) and a diameter of 2 ft. (60 cm), they still excavate another 8 in. (20cm) deep, behind this cavity. After completing excavation of the nest, the female starts laying one egg in a duration of three minutes. In a clutch, there are chances that you would find about 15 to 30 eggs or perhaps more than that. On completion of laying the eggs, the female totally covers the nest within one or more hours. It is mandatory for maintaining an incubation temperature of 86 to 88oF, for a period of 90 – 120 days.

For the Sulcata tortoise that is reared as an indoor pet, a normal temperature range of 68 to 80 o is sufficient. Even for them, a convenient basking provision with an overhead lighting provision is a must. Maintain the basking place to a temperature of 100. Similar to the majority of diurnal tortoise that are herbivorous, these also require a UVB light for the enclosures that are indoors to enable them to process their diet of calcium with ease. Maintain the enclosure with lighting facilities for a period of 12 to 14 hours during the day; at night time switch off all heat and light sources.

Unlike what sellers claim, it is not normally advisable to handle a Sulcata frequently. Over-handling can easily develop stress in them. Besides, there are chances for children dropping them when they are spooked. Such stress issues end in a slowdown in their health and activities.

According to CITES, exporting of C. Sulcata specimens taken from the forest and sold as a business, is banned. On account of the increased extraction from the forest and its breeding in captivity, most of the rescue places are packed and are not in a position to accommodate any more. In America, breeding and selling of these tortoises in rescue centers is not encouraged.