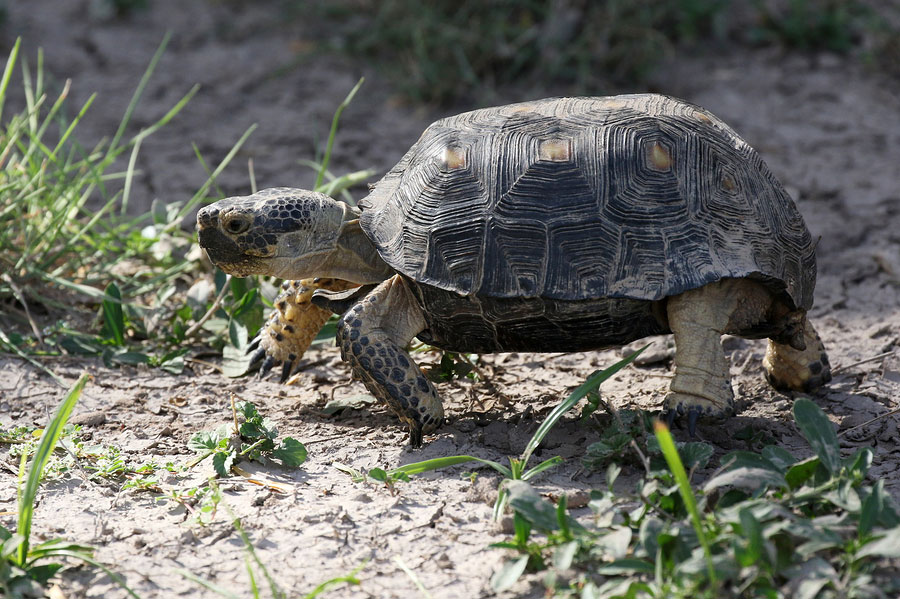 The carapace (upper shell) of the North American species, the Berlandier’s Tortoise, the tortoise,  Gopherus berlandieri or the Texas Tortoise is more or less rectangular in shape.  The carapace is slightly flattened at the upper portion and it has a crude, ribbed look. Its color is mostly brown, colored orange to yellow in  the center on a few scutes, but the color of the plastron (lower portion) is yellow. The head is in the shape of a wedge with snout pointed; its upper jaw is a little hooked. Its hind legs are like columns similar to that of an elephant’s legs. The color of the tail, limbs and head is brownish-yellow. You can distinguish a male Berlandier’s tortoise from the female by its  extra length and thinner shell. The plastron is concave in shape.

The Texas tortoise lives in the southern regions of Texas, Northeastern regions of Mexico and U.S.A. The Berlandier’s tortoise is omnivore reptile; its diet chiefly consisting of herbs and grasses. Still,  when scarcity occurs, they never hesitate to eat stems and fruits of prickly pears (the Opuntia cacti),  and red fruits. Also, they frequently eat snails, animal bones, insects and fecal material.

The inhabitation of the Berlandier’s tortoise (Texas Tortoise) is in the partial desert regions of Mexico, brush wood forests in the sub-tropic, humid regions of South Texas to a height of 100 to 200 meters and from the sea level right up to heights of 884 meters. Even then they prefer open scrub woods and properly-drained dirty soil.

Quite different from the other varieties of Gopherus, like the Gopherus Polyphemus or the gopher tortoise , the Berlandier’s tortoise never digs a widespread burrow. As an alternative, it makes use of the  its shell’s sides  and forelimbs to shove the soil and debris and form a shallow place of rest called pallet. They make this pallet, normally below a cactus or a bush, and in the course of usage of this pallet, at times, it digs as deep as 1.5 m. The Berlandier’s tortoise makes use of a convenient size burrow of a mammal and sometimes expands on it.

June to September is the prolonged courting and mating time of the Berlandier’s tortoise in Texas. While courting, the male goes behind its mate, moving his head quickly up and down in the direction in which she goes and ultimately reaching her. The male tries to bring her to a stop by biting on to her head, the back of her shell, not to speak of her front feet and smashing using his protruding gular, a strong extension in front of his bottom shell, slightly lower to the chin,  to smash her. The female normally circles round as a mode of escape, but ultimately surrenders by pulling in her head, and the male prolongs pushing her round. At the end he pounces on her from the rear, resting his front feet on her shell, and copulation begins.

From April to July the female begins to lay clutches of eggs (normally 2 or 3 eggs). Every year it lays a clutch or two in a pit and within 88 to 118 days of incubation, the eggs hatch. The maturing of Berlandier’s tortoise is gradual and people believe that females breed productively only when they are above ten years.

It is fine if you let the tortoise go back from where you got it. Texas tortoises are in the ‘federal’ list of the United States under the Endangered Species Act. On account of this protected position, In the United States, it is illegal to fetch a Texas tortoise from the wild. The sole lawful way  to possess a Texas tortoise is to adopt one from an organization of that state that has recognition, or get a hatchling from an animal that is bred in captivity.

NEVER PICK UP a Texas tortoise from the wild, in case you come across one. Similar to the California desert tortoises, if Texas tortoises are stressed extensively, they will eject the fecal matter in the bladder as an ultimate defense mechanism. Here the animal loses the reserve of water, which leads to its gradual death on account of dehydration. In nature,  the Texas tortoise consumes many types of vegetation. They relish dandelions, grasses cacti and other mixed weeds. Handpicked vegetation from outside is a better option of feeding your pet rather than feeding them with vegetables purchased from the supermarket.

It is essential to supplement them with extra calcium. Dust the food with powdered calcium. Supplement and vitamin D3 when you keep them indoors and with calcium free of D3 if you keep them outdoors.  If needed,  provide them with a cuttlefish bone for gnawing that is good for maintaining the proper growth of the beak. You would do well to  supplement the diet regularly with mineral complexes and vitamins. A ‘turtle table’ is a normal way of accommodating medium or small sized Texas tortoises indoors.

In general, it has the appearance of a bookshelf turned over. 2’ x 3’ (60 cm x 90 cm) is an ideal size of an enclosure for a hatchling; enlarge the size of the enclosure when the tortoise grows. For easy access to food and water for the tortoise,  make holes at the bottom of the turtle table by cutting and depressing the food and water containers into it.
Keep the area in the enclosure where water is placed sufficiently big enough to permit the tortoise to soak into it, if it desires. Besides, to prevent it from drowning, keep the area of the water sufficiently shallow.

When the enclosure is outdoors, make it predator proof. This is advantageous over the indoor accommodation, especially when the weather is warm. Extend the perimeter of the enclosure deep into the soil because these tortoises burrow deep. This variety does not survive well where there is high rainfall and humidity. Under such circumstances make provision for a  well drained soil and landscape of which  a large portion is not excessively wet. In order to simulate a natural environment,  several keepers have understood that it is proper to construct an artificial burrow for the tortoise. Some type of outdoor housing for the major part of the year is more favored when compared to the indoor housing.

Never combine this species of tortoise with the other variety of tortoise or turtle.  In case you are keeping reptiles with a known history of respiration diseases,  take extreme caution to avoid cross contamination with your other collection of Chelonia.
This variety is somewhat stubborn; it is not possible to house this male with males of other varieties. Conflicts are likely to arise. If the temperature turns warm, this is an opportunity to take early remedial measures so that the loser of the conflict will not die of dehydration and hyperthermia.

Texas tortoise does not need that much of humidity since they dwell naturally in  places  that are hot and dry; as a matter of fact they are unable to adjust with a high humidity level

Use in soil or sand as a substrate which is used by them in nature.