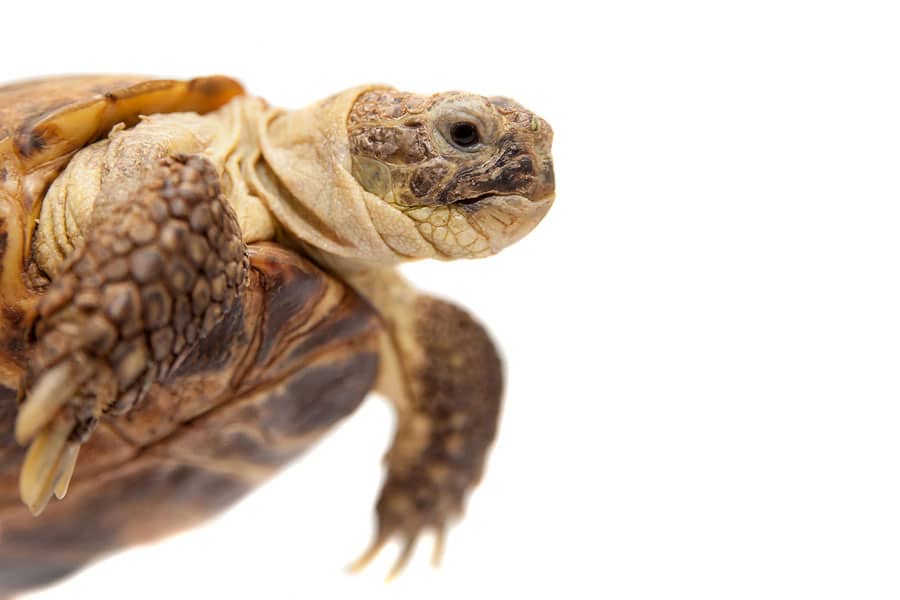 The Russian tortoise or Horsfield’s tortoise, Agrionemys Horsfieldii or otherwise called Central Asian tortoise is of the genus Agrionemys,  acquiring  its name from the American naturalist Thomas Horsfield. This variety is a well-liked pet.

The Russian tortoise is a species of small variety; its length varies between 13 to 25 cm that is around 5-9 inches (the length of the males’ range between 13-20 cm, and that of the females’ range from 15-25cm).  These tortoises are dimorphic (in sex; the females grow a bit bigger. The tail of the male seems longer and normally tucked along the side, and the scutes of the female seem to flare over their shells. This is absent in the males. Their mating lasts for 10 to 12 hours. Color differs a lot;the color of the shell is black or reddish brown, but diminishes to yellow in the scute flanks. The color of the body varies from brown to straw yellow. Their toes number four. They survive for long (50 years or more), owners of this pet let them live a free life, normally they are amicable with humans.

The Russian tortoise is charming and cordial. They are lively and play with you for a long time. They get acquainted with the person who feeds them soon, and when they see you, they rush up towards you with expectation on their faces;  it is interesting to observe them.

We see these Russian tortoises in North Pakistan, North West China, Afghanistan, Eastern and Northern Iran and the Soviet territory of Kazakhstan. In the pet store, we obtain them from the territory of Uzbekistan. These tortoises generally inhabit open dry landscapes. You can find them in  clay and sand deserts with  bushes and sparse grasses. You cannot often see Russian tortoises in cultivated fields and thick grassy places. In the wild, the Russian tortoise becomes lively just for a short period in a year. It appears from its hideout in the middle of March, and vigorously searches for food and their mating goes on until the middle of June. It aestivates during summer, when the temperature is very hot. October up to March is the time for hibernation in Uzbekistan. They mate following the rains, from September to November. The males compete with one another to have authority to mate with the females and they make sounds while mating.
Following sixty days of copulation the females wander about in search of an apt location to nest. During the period of five to fifteen days the female unearth almost four or five nests until she chooses the right site to lay her eggs.

If possible, the best home for your Russian tortoise is an enclosure outside. Ensure that the enclosure is safe from predators, like humans, dogs, cats, possums as well as raccoons. Russian tortoises are very good at climbing as well as digging;  so ensure that their habitat is secure! For shelter and food,  make it a point to place a lot of weeds, shrubs as well as wild flowers in their enclosure. Regular supply of water is essential for drinking and soaking purposes in case your tortoise intends to.

Maintaining an enclosure outside is excellent, especially during the warmer months. An enclosure of around 4 ft x 4 ft is the appropriate least size for a grown up tortoise. These Russian tortoises are extremely inquisitive as well as dynamic; therefore the bigger the pen the better. Make sure that the base of the enclosure extends downward by about 8 to 12 inches and use  hardware cloth, heavy duty chicken wire, wood or cinder blocks because the Russian tortoises are excellent diggers and climbers. Construct the wall of the enclosure with material such as wood or other items that does not permit the tortoise to climb, maintain the wall height of the pen to a minimum of 12 inches.

Russian tortoises are good at grazing and are fond of plants with broad leaves. The ideal diet consists of weeds (flowers and leaves). Their most liked dish is dandelion. Russian tortoises consume different types of weeds, like stalks, flowers and also leaves; they are herbivorous. Their usual diet comprises of fibrous food that has a high content of calcium and low content of protein. It is from plants that they obtain protein and not from animal products. The diet of the Russian tortoise is exempted from fruits that includes a great quantity of sugar, which results in parasite blooms and swell up. Contrary to what many sellers tell customers, tortoises generally should not be handled with any regularity. They stress easily when you handle them in excess, and children tend to drop them when spooked. These stress factors can lead to a decline in a tortoise’s activity level and health.