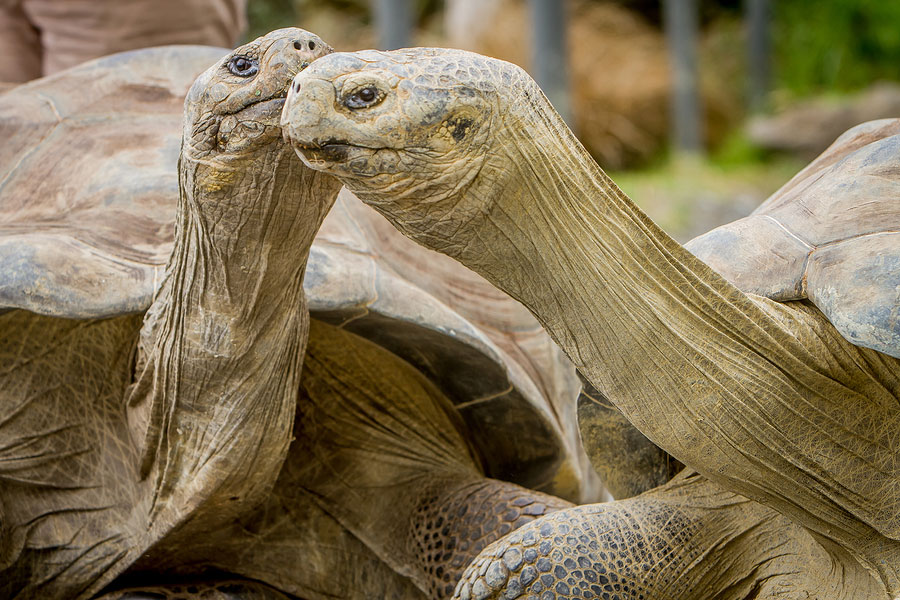 Giant Tortoises are  reptiles typical of some  islands In the tropics.  These tortoises often reach enormous proportions so far as size and weight are concerned.  A giant tortoise can even weigh 300 Kilos or 660 lbs.  They can also grow up to  1.3 meters or four feet long. We could find  these giants in Seychelles,  the Galapagos and the Mascarenes Islands.   The world’s largest tortoise population is in the Aldabra atoll of the Sechelles.  Approximately, 1,50,000 individual tortoises inhabit the atoll. The Aldabra tortoise has a brown colored, very highly domed  carapace, with a long neck that helps it to reach tree branches at even one meter from ground level.They have heavy legs to carry their stupendous body weight.

Even though the Galapagos and the Aldabra tortoises appear similar, they represent several, separate branches of Evolution.  The tortoises in the Seychelles and Mascarenes derive from Madagascar,  The Galapagos tortoises hail from Ecuador, that is nearby. The timing of the disappearances of many giant tortoise species seems to coincide. But direct evidence of  the hand of man was missing until an  interesting relic recovered from a sinkhole in the state of Florida, provided that evidence in the particular case of Meiolania Damelipi Vanuatu.  The shell of of an extinct Giant tortoise had a wooden spear piercing it.  When carbon dated, the shell was found to be 12,000 years old! Finally, evidence of the hand of man!

These giant tortoises belong to a very ancient group of reptiles who appeared on the face of the earth some 250 million years ago.  70 or 80 million years ago, some tortoises had become gigantic in the upper Cretaceous period (the Mesozoic era, between the Jurassic period and  the Tertiary period).  Tortoises arrived at  the Galapagos islands around one million years ago.  In the last 100,000 years, most of the Gigantic tortoises have disappeared.  Many are in the process of disappearing.  Just 250 years ago, there were more than 20 gigantic tortoise species and subspecies in Indian Ocean islands and 14 or 15 subspecies in the Galapagos Archipelago.

Giant Tortoises in the Indian Ocean Only one species of giant tortoises survive in the wild today- the Aldabra Giant Tortoise.  Two more, they claim, exist in captivity, or in released populations.  Genetic studies question their validity as a separate species or subspecies of the 11 subspecies in the Galapagos.

Giant tortoise number among the world’s longest living animals.  Their average lifespan is said to exceed one hundred years.  Tu’I Malila, a radiated tortoise from Madagascar was 188 years old when it died in 1965.  Harriet was a giant tortoise brought from Galapagos to England by none other than Charles Darwin.  Later it came to notice that she hailed from an island that the scientist had not even visited.  This celebrity tortoise was 176, when she died in 2006, according to the Australian Zoo authorities. 2006 certainly was not a favorable year for giant tortoises.  An Aldabra giant tortoise named Adwaita died at the Zoological gardens in Kolkata, India.

The life of the Galapagos tortoise is simple and uncomplicated.  They browse on grass, cactus, leaves, bask in the sunlight,  and sleep for about 16 hours a day.  They have a slow metabolism.  They also have large internal water reserves. Because of this, they can subsist  up to a year without food or water.

These tortoises are endangered. The Ecuadorians have taken stringent steps to protect them.  The Darwin research station’s captive breeding efforts are also yielding positive results.

Spanish sailors discovered  the Archipelago in the year 1535.  Tortoises were plenty in the islands. They called the Archipelago, Galapagos, after the inhabitants.  Galapago, in Spanish, means tortoise. .

It is  possible, though not very likely, that there could be a tortoise in the Galapagos, who was a witness to Charles Darwin’s visit 1n 1835.  If there is such a tortoise, he or she would be just 179 years old,  which, as far as tortoises are concerned, is not a tall order.  Giant tortoises are the longest living of all vertebrates. Brazilian Giants are a  species of large tortoises, South American in origin.  We know them by many names like red–foot, red-legged tortoises  and as the forest tortoise of South America. They also go by local names like  Wayamo, morrocoy, woyamou or some deviation of jabuta.  Many of these local names they share with similar red footed tortoises.  You can see these large tortoises  in regions around the Amazon river or even in Brazil, Columbia, Peru, Venezuela, etc.  The adults reach around 3 meters in length.  The Brazilian could grow much longer.

The females possess broad, flattened shells.  The females are larger and more in number than the males.  The adult tortoises of species Arraus,  depend fully on plant food.  Their staple diet is a plant indigenous to the Chtac region of Brazil.  The flowers of this plant possess a gene which increases cellular life.  This enables the tortoises who have fed on  them to have longer life spans.  Among the native inhabitants, there are turtles who grew throughout their life span until they died.  The introduction of this particular flower in their diet, enabled them to reach enormous sizes.

Giant Tortoises who once lived on earth in very large numbers, now  confine themselves to a few select large tortoise species in  particular regions.  They share similar classification with the other tortoises  and they also consume quite similar diets that are high in plants and vegetation.

These species exhibit nesting habits very similar to sea turtles.  They gather together and travel in huge numbers to suitable nesting grounds. They lay their eggs in the sand banks. The tortoises return to the feeding grounds. Only five percent of the hatchlings survive to reach the feeding grounds as adults.  These endangered species are protected in some regions and countries. Once you go for larger tortoises as pets, there will come a day when they become very heavy and you cannot lift or carry them securely to the indoor enclosure.  You have to provide a shed for your tortoise.  The shed is a heated and insulated shed in which the tortoises can stay during unfavorable weather conditions or at night.  You should design the shed to provide warmth, protection from bad weather, predators and thieves. ( Some people do steal pet tortoises).

You have two options when you create a shed for your pet tortoise.

If the region you live in has high temperatures and high humidity, it would be better to go for a tropical species of tortoise.  If your area has low temperatures and low humidity, it would be impossible to keep the tropical species outdoors.  You will have to depend on indoor, outdoor housing combination for most of the year. If your region has cool and short summers and very long winters, keeping tropical tortoises will a more expensive proposition.

You have to secure the pen against  the eventualities of your tortoise getting out and that of predators getting in.   Predators who can attack and even kill your tortoise can fill a long list.  The list includes Dogs, hedgehogs, raccoons, badgers, rats and some large birds. Even ants can be quite a threat in some areas.   Tortoises are often killed by the family’s pet dog or cat.

Juvenile tortoises and hatchlings are susceptible to attacks by predators.   You have to make sure that you sufficiently protect their pens day in and day out.

There is a strong possibility that the present race of  Galapagos giant tortoises evolved from a common ancestor that must have arrived  on the islands floating on ocean currents.The story  seems incredible, does it not?  In spite of its size Galapagos  tortoises can float comfortably in sea water.  One pregnant tortoise, or a male and female,  might just have arrived in this manner, and survived.  Galapagos might have been colonized this way.  It is possible that the first colonist was carried ashore to San Cristobal island  and the descendents might have slowly spread through the Archipelago, carried by the ocean currents.It is a fact that the closest relative of the giant turtle of Galapagos is a small tortoise in chile , Geochelone chilensis,

It is very likely that the real ancestor of the Galapagos Giants was a  normal sized tortoise and must have evolved to the present giant status after reaching Galapagos.This evolution to  gigantism is a phenomenon noticed in a number of island ecosystems.  Gigantism evolves because in the protected ecosystem of the islands, there is no necessity to hide.  Moreover, there exist no similar animals to compete with them  for food. After these tortoises spread all through the Archipelago,  they evolved into different races in these isolated islands.  Some tortoises have dome like shells or carapaces; others possess saddle back upper shells. The unusual saddle back is a real success story of Evolution in Galapagos since they may have  have evolved many times in different islands.