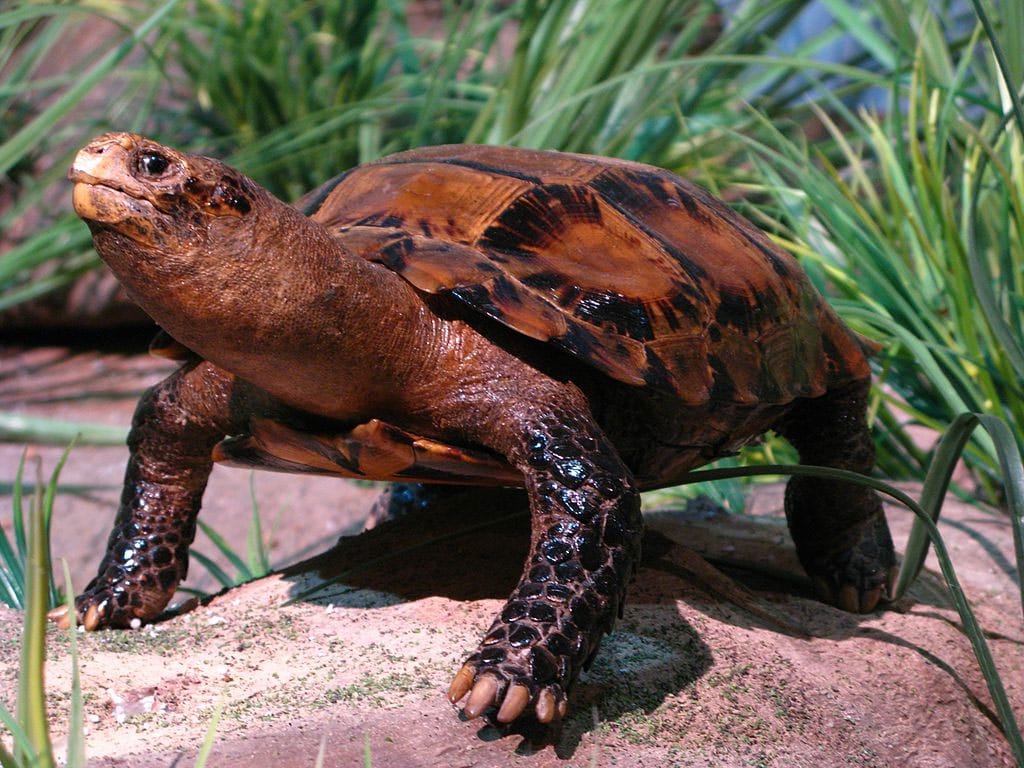 The species impressed tortoise Manouria , biologically named Manouria impressa, is found in the mountain forest regions in the southeast of Asia in the country of Burma, including the southern part of China, Laos, Thailand, Malaysia, Cambodia and Vietnam. Its skin and shell is golden brown in color. Grown ups are far smaller when compared to their cousins, who are called the Asian Forest Tortoise, biologically named Manouria Emys.

This impressed tortoise dwells in high elevated areas of 2,000 m. There is not much information  about their behavior. Their natural diet comprises mostly of bamboo shoots and mushrooms. In captivity,  they say that  it is a problem for them to survive; Not much documentation exists about their longevity in nature. Locals use them as food and there are no reports on captivity.

In spite of the early description of 1882, information about the impressed tortoise in captivity or in the wild is a mystery.   The impressed tortoise distinguishes itself  from the others by its flattened carapace. Its rim is strong and saw-like with  concave scutes, from which it derived its name.  The color of the carapace is dim orange to light horn color, the center each scute is colored brown that merges into a darker color radiating stripes along the edges; this is in contrast with the mild color at the base. With age, these markings gradually fade. The color of the older ones still is more or less consistently horn colored. The color of the tail and limbs fade from black to dark brown.  The color of the head has a prominent yellow to dark tan color; a few of them have pink pigmentation round their snout

As per reports,  the impressed tortoise mates in the rainy season, and middle of March to September is their courting period.  The formal procedure of the male’s courtship consists of bobbing its head up and down before the female, at the same time opening and closing its mouth. They lay their eggs in a hollow space and later conceal them with foliage,  preventing the attack from predators.  There is a document proof that a clutch consists of 17 eggs that was laid in the month of May. When in captivity,  after laying the eggs, the female shields them for a period of 3 – 20 days, and incessantly supplies more material to the nest. The proof at hand is that the impressed tortoise is agile during rains and at twilight hours.

The impressed tortoise is found in Thailand, Laos (Lao People’s Democratic Republic), Malaysia, Vietnam and Cambodia, there is evidence that it is found in China as well.

We have no idea of the desired habitat of this impressed tortoise, yet as per the common findings, they are an upland variety of the high ranges of mountains and hills.  This species dwells in bamboo thickets and evergreen forests. For their requirement of water they depend on the vegetation that is drenched with rain or on heavy dew and the biologists say  that they do not have any association with water bodies.  They spend most of the time concealing themselves below the leaf litters lying on the floor of the forest. The Vietnamese and the Chinese over use these tortoises for their food. Unrestrained forest fires induce  loss of habitat on account of agricultural invasion which results in the reduction in their numbers.  Furthermore, the collecting of these tortoises for the pet trades is increasing over the last  few decades. About 1,634 specimens of these tortoises are lawfully exported during 1986 to 1990;  most of them are from Thailand and Malaysia. The amount exported in 1990 was double that of 1988.