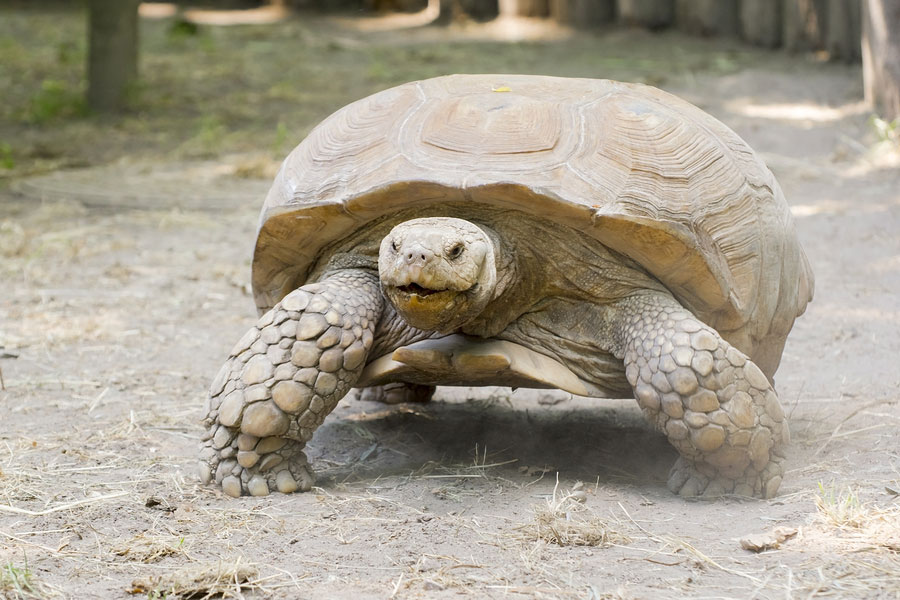 Our world is blessed with life forms that are so diverse. Across the vast stretches of land and seas live different life forms that are astounding in their own ways. The range of such species is truly immense. Both our earth’s flora and fauna are marvels to behold. Out of all these living forms, the ones who have walked our earth for centuries are the tortoises. When I say centuries, I really mean it! They can live to be over a hundred years old and can be very big once they reach adulthood. Out of all these, the sulcata (also known as the African spurred) is known to be the third largest (next to the Galapagos and Aldabra giant).

Before we proceed any further, it would be great to distinguish what a tortoise is from a turtle. Using these two terms can be really confusing and some of us might even use it interchangeably. Well, the fact of the matter is that a tortoise falls under the category of turtles. It is apparent how both of them are reptiles and have shells to protect their bodies. While there are a number of differences between the two, one of the easiest to distinguish is how tortoises are not much of water dwellers such as turtles. Generally, tortoises prefer to be in dry areas while turtles mostly live in water. So, there you have it – a major distinction between the two.

Despite the fact that these creatures will indeed become huge when fully grown, they have been made available to prospective pet owners. If you are one of those who plan to have one as a pet, then learning more information about them will help you understand their nature. Here are some facts:

From the name of the African spurred, it is easy to tell that they are native to the African continent. They can particularly be found in the Sahara Desert, and in countries across the continent including Ethiopia, Sudan, Nigeria, Mali, and Mauritania among many others. Their natural habitats are grasslands, savannahs, and shrublands. They are known to burrow into the ground of these dry lands so that they may find moist areas and escape high temperatures. In fact, their burrowing ability is quite remarkable and they have been referred to as little bulldozers due to this ability. When placed in captivity, there are some notes that should be remembered to assure that these animals remain away from health risks. They must be kept in similar conditions just like in their natural habitat. That is, they must be kept in a dry and hot environment and avoid being in cold and damp temperatures. When it rains or if the nights turn out to be too cold, they can be placed indoors in temporary housing set-ups. Being herbivores, the diet of a tortoise constitutes mostly of vegetables, grasses and other herbaceous plants. Their diet is another subject matter that should be discussed thoroughly due to its complexity. Hence, we came up with a separate article that can help you look into the matter further.

It is widely known that these creatures have a lengthy lifespan. They can live for over a century. In the case of the sulcata variety, they are expected to have a lifespan of about 50 to 150 years. Well, that means that some of them alive today have been around since the latter part of the 19th century! Now that’s one amazing feat. As hatchlings, they are barely 3 inches in length and you might be in for a surprise as they get older. Being the third largest out of all the species, you can expect the African spurred tortoise to get really big when fully grown. In average, they can weigh up to 200 lbs and be 24 to 36 inches long. Hence, necessary adjustments should be made to its housing and caging as they grow older. However, don’t worry too much about that while they are young since it will take time for them to become massive in size.

People who consider having one as a pet should be responsible enough to understand the nature of these animals. In this manner, they can be assured that the tortoise can be healthy and reach its expected lifespan. Providing them with the proper diet and care are keys so they can enjoy a healthy life.