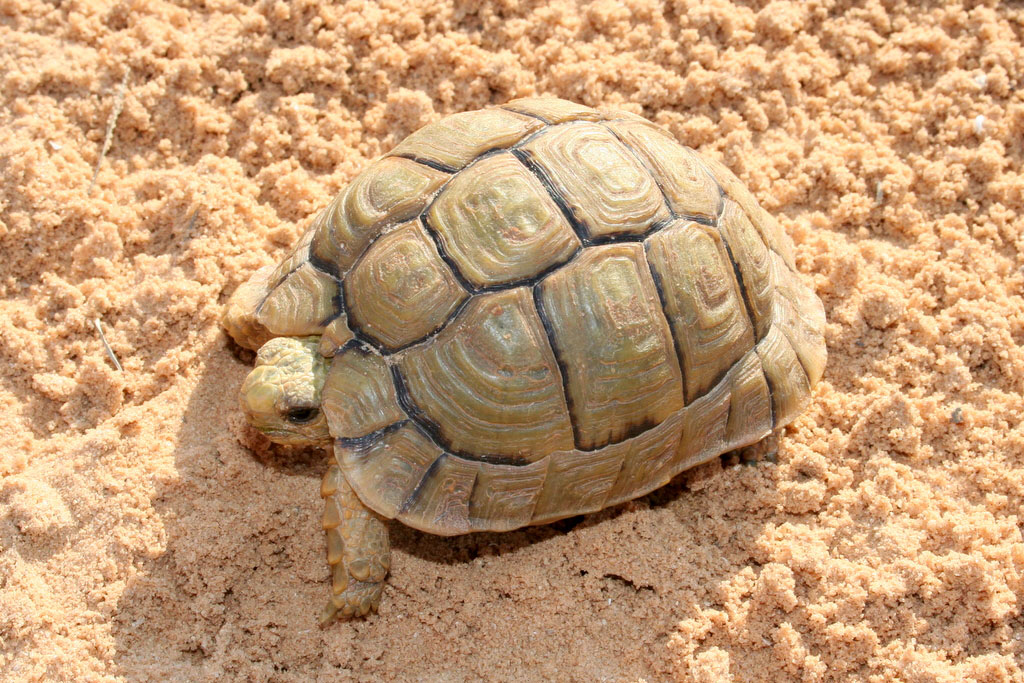 Egyptian tortoise Testudo Kleinmanni or the Kleinmann’s tortoise, also known as Leith’s tortoise, and is one of the critically endangered species on Earth.  The neck-hiding tortoises are decreasing more these days, and are completely extinct in Egypt, Thus, it requires more care and special measures for protecting the remaining species on Earth.

The tiniest tortoise, found across the entire Northern Hemisphere is none other than Kleinmann tortoise, with the females, comparatively larger than the males. The males on the other hand, are thin and fragile bearing a long tail. The shells have huge arch and port wide varieties of color, from ivory to pale gold, dark brown, pink or even dull yellow. The color, according to Gloger, aids in balancing the sunlight effect. Thus, they pale colored tortoises are able to inhabit the desert areas for longer periods of time. It is also another method of camouflaging in the deserts. Usually the base of the shell is light yellow, along with two somber triangles, present on both the sides of abdominal scute. The scutes have murky sidings which vanish with age.

The head as well as the limbs are a dim ivory-yellow to a yellow-brownish shade.

Usually they are decent, and well-mannered in nature. Unlike others, they are not aggressive.

The Leith tortoises, reside in the arid and semi-arid areas, commonly with sand, gravels, spread rocks, dry woodlands or areas covered with shrubs, hollow and sandy streams, marshy areas, rich in salty soil. As pets, they feed on fruits, green vegetables, grasses, but the diets of the free tortoises are not clearly known.

The Egyptian tortoise is a unique species that you find  in very a few selected areas, mainly in deserts across the north of Egypt and Cyrenaica, Libya, west of the Negev, and Israel. Basically, they love costal areas, and do not go beyond 90 kilometers from the coast.

The Egyptian tortoise attains  sexual maturity as soon as it is  about 5 years of age. When they are free in the wild, they mate in March, while those residing at home in captivity, mate in April, August-November. The male tortoise rams the females, after chasing in order to mate. Much like the doves, they give a mating call, which seems like mourning. Then the females lay eggs in the shallow bowls beneath the bushes or inside empty burrows. Each clutch gives one to five eggs. The hatchlings come out during summer or the early autumn. A safe and secured location, along with a present greenhouse or a shady area, along with a warm and arid area to sleep (You must ensure around 12 C temperature during the night). Keep a basking lamp, Use a  250W Infra Red bulb (white) in a Pig lamp set-up and leave enough space for each tortoise to move and warm up simultaneously.

As per their size and difficulty level, you would do well to use indoor areas, even though a little bit  of natural sunlight is essential.

Ample amount of green leaves is vital for your Egyptian tortoises. Use a wide variety of green vegetables that they never give up eating.

Often there are cases when the tortoises faces severe problems when offered fruits. While, almost all varieties of the tortoises prefer to have at least a little amount of fruits, you must not feed your  Egyptian tortoise with any fruits.

Usually, the Leith’s tortoises do not require calcium supplements, when they are kept inside the home, but make sure it receives ample amount of vitamin D3 supplement, as it will make up for the lack of vitamin D obtained naturally from sunlight (when kept indoors).

The Egyptian tortoises are timid and of delicate nature. If you see them stressed, it means that they are sick.

Several tests conducted with a few groups of Testudo revealed their shy nature, confirming they were not very happy with human intervention except for the minimum contact with the keeper.