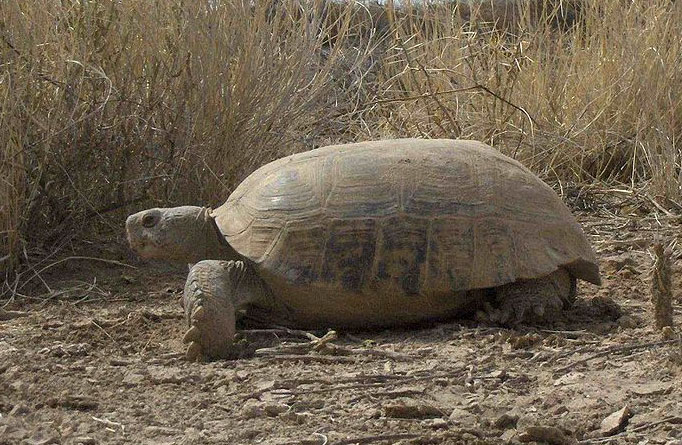 The Bolson Tortoise Gopherus,  biologically named Gopherus Flavomarginatus, otherwise known as Yellow-margined or Mexican giant tortoise is a variety of tortoise that originated from the North American continent. There are 4 of them, of which this is the biggest; its carapace is 46 cm (18 in) long. These tortoises dwell in the Chihuanhauan Desert region called Bolson de Mapimi, situated in the Northern Center of Mexico.

Gopherus flavoumarginatus (Testudinidae) is commonly found in a stretch of scattered lone basins, which collectively, they call,  Bolson de Mapimi in the desert of Chihuahuan. On account of the great disasters at different levels which occurred in the middle of the 20th century, its number decreased. Yet, the Bolson Tortoises are on track for  recuperation  because of the concentrated continued efforts of conservationists.

They first found this Bolson Tortoise in 1959. The myth states that  team of biologists employed in Bolson de Mapimi at a cattle breeding establishment, observed chicken feasting on a great quantity of tortoise shells.  On inquiring about the shell’s origin, the locals told them that “La Tortuga Grande Del Desierto” was the largest desert tortoise.

According to the research conducted lately, and  printed  in the year 1991, the data gathered in 1983 estimated that the tortoises left over in nature numbered less than 10,000. The excessive trade of these animals in trade and for food, agricultural developments, invasion of roads, railway lines, and the like,   speeded up the decrease in these species during the last 40 years.

In  2006, about 26 Bolson tortoises were shifted from Arizona, Research Ranch of The Audubon Appleton Whittel in Elgin to Ted Turner’s Armendiaris Ranch situated in the southern part of central New Mexico, a desert region of Chihuahuan surroundings where these tortoises lived originally. The Bolson Tortoise, was  now given the name, “Appleton tortoise”, in memory of a successful combatant Ariel Appleton,  who lived in the area where Bolson Tortoises are conserved. Originally, Dr. David Morafka had introduced these tortoises to Arizona from Durango of Mexico in the year 1973.. From among the inhabitants of Appleton,  they moved 4 tortoises to  Carlsbad’s Living. Desert Museum of Mexico. These two places are proud of their active breeding program.

The authorities suggested the Bolson Tortoise as the main species for reinstatement endeavors. The peculiarity of this tortoise is that, unlike many of the other  pre-historic animals that have disappeared from the face of the earth,  this species still exists. The fund for the Turner Endangered variety responsible for the reintroduction of Bolson Tortoise into New Mexico, clearly explained that their  re-establishment in the Southwestern regions where they face extinction is a  recovery project and not a ‘Rewilding” project, even though Rewilding fundamentals are there.

The habitat favored by Bolson Tortoises is  low grade slopes (0.5% to 2%) consisting of soil of a fine texture (average 48% sand, 32% silt, 10% gravel), with an assortment of greenery, consisting of desert bunch grass and Sclerophylshrubs. These areas at the fringe of basin floodplains at an  altitude of  1,000 to 1,400 meters.

In order to protect themselves from severe climatic conditions, weather, and from their predators, these Bolson tortoises dig deep burrows to a depth of 2 meters and a length of 8 meters. Their ground activities depend on the temperature and the rains. Some experts estimated that the time spent on the surface of the earth by a grown up Bolson Tortoise is below 1% of their whole life  and this is either for foraging along the well-settled tracks adjacent to the burrow or for basking. They build burrows by gathering and combining in groups exhibiting their social structure. The juveniles choose to dig (or use the opportunity) to  burrow below the Opuntia cacti.

This species is the biggest of all tortoises of North America, reaching 40 cm length (fossils show that earlier they were double the size) Males and females are of the same size. They become sexually mature, perhaps when they attain more than 25 cm and age from 15 to 20 years. The number of females exceeds the males, with a male to female ratio of 0.43 to 0.83 in separate populations. Females in nature,  lay one to two clutches  of approximately 5 eggs;  the average infertility rate is 35%. Hence the average production of females is 3 to 4 offsprings within  a period of 8 years during her reproductive time. With  only 5% survival up to maturity,  replacement time is more than half a century.

They say that the ultimate reduction in this variety over a  geological period is due to many factors such as the changing climate, excessive exploitation and seismic activity resulting  in eradicating the whole population of  burrows caving in.

Constant threats are  the destruction due to excessive grazing, degradation of habitats, irrigation and ploughing that are obvious reasons for the demolition of large tortoise colonies leading to direct death and a reduction in the survival of juveniles.