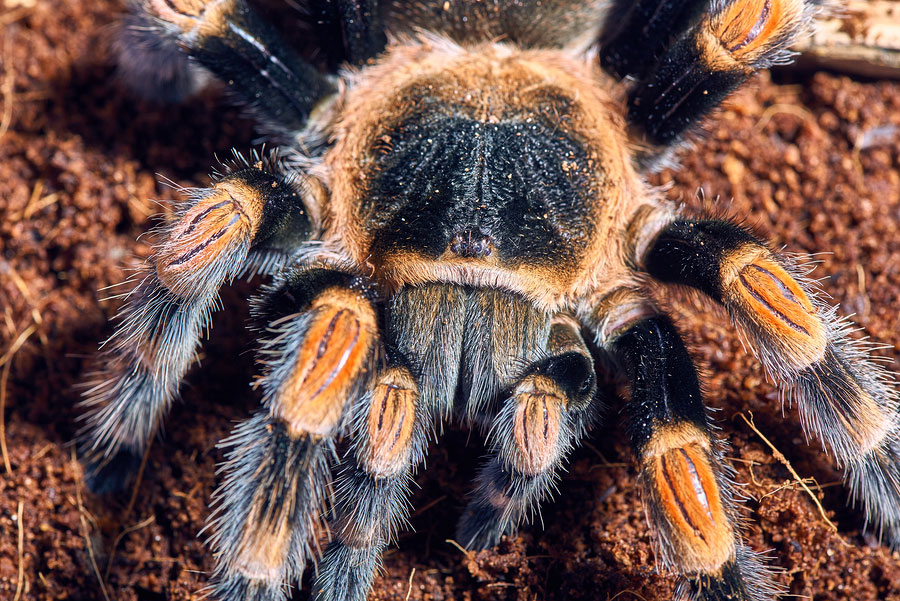 The Females Have a Life Span of 30 Years

Mountain ranges of western Panama and Mexico, like the Sierra Madre Del Sur and Sierra Madre Occidental, are known to inhabit the earthly variety of the Red-kneed Mexican Tarantula, biologically named as Brachypelma smithi. They form a large genus and many enthusiasts have them as pets.  This variety of tarantula, having a black abdomen with a handful of red hairs, has a very long life. Though males live for eight to ten years, the life of females can stretch up to thirty years.  Its legs have black stripes with bands in red, orange and tan colors. The leg span of an adult spider varies from five to six inches.

The Mexican tarantula is a lonely territorial arachnid, living in burrows. They spin flat meshes at ground level in deserts, rocky parts of rainforests, close to logs and bushes and cacti. Their burrows are cavernous, and provide them protection against predators like the White-nosed Coati, while allowing them to trap passing unsuspecting prey. Females spend most of their life in the burrows.

This species of tarantulas survive on insects, small birds, spiders, frogs and mice. They are unable to take in food. So, using their fangs they would bite the prey and kill them with their venom. As a result, prey gets liquefied and the tarantula sucks that resultant fluid.

Like most other tarantulas, the Red-kneed Mexican variety also molts to grow. The time may vary from seven days to thirty. While molting, the tarantula will pretend as if dead, and lay flat on its back, as if it were dead. The newly developing exoskeleton is exceptionally delicate. Once the effective molting is over, the new one takes time to become firm.

The body of Mexican tarantulas (red-kneed) has two main parts, the cephalothorax (Prosoma) and the abdomen or the opisthosoma. It has eight legs that are multi-jointed, two food-handling attachments, and two mouthparts. The body is black with patches in red or orange on the leg joints and in the head region. It has eight light-sensitive eyes placed on the front-top surface of the cephalothorax that sense light. Minute hairs enclose their legs and bodies. The Mexican tarantula has 8 legs, each made of seven parts and a claw. They use their two front legs to catch the prey, while the 6 legs in the rear provide its mobility. An interesting aspect here is that these tarantulas can regenerate a lost leg after molting, even though the new leg may have the strength of the original.

Each time they molt by shedding their exoskeleton, you can see urticating hairs developing on the abdomen on its dorsal side. In defense or offense, when these tarantulas kick off the hairs onto its predator, they embed themselves in the skin or eyes of the other animal, causing it much discomfort, pain and irritation.

Only when they pass two years of age, will you find the Mexican Red Kneed Tarantula starting to breed. The breeding process may end up with the female eating the male. Normally, it is after the rainy season between July and September,  that the female  lays between 400 to 1000 eggs and seals them in a cocoon made from silk, until they hatch in two to eight weeks. When the spiderlings are two to three weeks old, they start living independently.

Raising Red-knee Tarantula as a Pet

If you are considering raising this terrestrial tarantula as a pet, a general thumb rule dictates that you should go in for an enclosure that is at least three times the extended leg-span of the tarantula, and remember, with these spiders, the ground space takes priority over the cage height. A glass enclosure or terrarium of 5-10 gallon capacity with a miniature landscape with living plants is ideal for these Mexican Tarantulas. You should arrange to provide a tight-fitting screen lid that allows for sufficient airflow. You must arrange a 4 to 5 inch substrates of a slightly damp soil or moss with a mix of invertebrates, to allow for the animals to burrow. To ensure proper hydration of your pet, maintain the humidity at around 55 to 65 %. This will also prevent the burrows from drying and collapsing. If you provide driftwood or a small cave, you can ensure your pet’s safety and comfort.

Since tarantulas are nocturnal creatures, you do not need to provide UV lighting. Maintain a temperature of 75 to 80 degrees F during the day, which may drop to 70 degrees F at night. Most tarantulas survive at room temperatures, but if the temperature drops, you could do well in providing a small heater under the tank, as using lamps overhead can dehydrate your pet. In the wild, these carnivorous species feed on insects, small lizards, rodents and the like, but in captivity, it is better to feed the adult tarantulas just once a week, and vary that meal every  week, but take care to remove the uneaten or partly eaten prey parts to keep your pet in good health.

You can feed your Mexican tarantula pet with feeder insects including crickets, waxworms, silkworms, cockroaches and mealworms, and just for variety, once in a few months, with pinky mice. Make sure to provide a tray of water in the enclosure, which you can consider misting with a water-sprayer, occasionally.