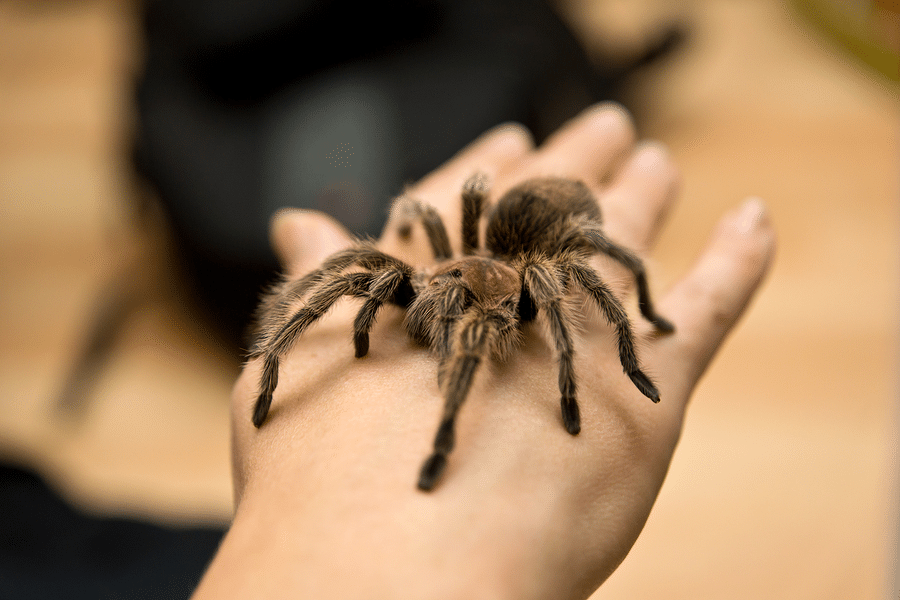 Beauty Lies in The Eyes Of the Beholder

Tarantulas are a cluster of mostly hairy and quite large arachnids derived from the Greek word “arachne,” meaning spider), or joint-legged invertebrate animals, with eight legs, belonging to the Theraphosidae family of spiders, in the subphylum Chelicerata, which boasts of almost 900 identified species. Tarantulas is a common name for several members of the Theraphosidae. They dwell in burrows or crevices in rocks.

Most of the tarantulas fall broadly into two groups; one from the Eastern hemisphere called the “old world” and the other from the western hemisphere called the “new world”. However a common pet tarantula is the Chilean Rose or the Grammostola rosea , from Chlile in South America, which makes for an ideal pet. By and far tarantulas are the largest arachnids, mostly measuring three to four inches, with some rare species like the Pseudotherathosa apophysis growing up to 13 inches. They are mostly dark black or brown, but some species have brilliant red or blue hues, and some have orange or yellow stripes along their legs.Many hobbyists today, are excited about keeping tarantulas as pets.

Tarantulas have exoskeletons, a hard exterior like armor, which they molt at various stages of their journey into adulthood. The body is in two main parts; the prosoma and the abdomen, joined by the pedicle or the waist, which is vital to the quick mobility of the tarantula. They have eight simple and redundant eyes, but use vibrations to detect prey. The fangs or chelicerae that release the venom lie just below the eyes. Their seven segmented, eight legs with retractable claws and the fangs (chilecerae) connect to the body at the prosoma.

Contrary to the myths, many species of tarantulas do not pose a danger to humans, resulting in some species becoming popular as an exotic pet for several years now. What adds fascination to keeping tarantulas as pets, is their unique quiet demeanor, needing little space, making a hobby of rearing them as pets, an unforgettable experience. Available in a different sizes and shapes however, they are delicate and need careful handling and each species will need special housing and care. Aspiring hobbyists must first try to understand the concept of tarantulas as pets. Some of the popular species of tarantula pets are:

Try to choose a female tarantula as a pet because, some of them live up to 20 years, whereas, a male has a much lower life expectancy of just a couple of years.

Are Tarantulas Dangerous As Pets?

Tarantulas do have a venomous bite, but in most of the pet species, their venom toxicity levels are only similar to a sting from a bee or a wasp, causing an uncomfortable local reaction followed by swelling, redness and pain. Before keeping tarantulas as pets,you would do well first to check if you are allergic to spider bites, in which case their bite can take on fatal overtones. Most tarantulas, being wild, prefer to retreat and not bite, which is why learning about spider behavior is paramount if you want to rear tarantulas. Make sure to buy your pets with guarantee only from reputed dealers to ensure that you do not end up with some varieties of tarantulas that are more venomous, with a bite that is fatal or can make you very sick. Another concern that you ought to discuss while handling tarantulas is their tiny barbed abdominal hair that causes an itching sensation and inflames your eye, if by chance you rub your eyes with your hand after handling a tarantula.

This is a very tricky business because you can have only one of these scenarios when to try to put an adult male and female in one cage. Either the female tarantula eats the male, both spiders suffer injury, or they mate, much to the breeder’s excitement. It is best to remove the male to his own cage after mating, lest the female exercise her cannibalistic tendencies. A diet of gut loaded ( fed with nutritious food ) crickets, supplemented with other insect species, is ideal for a tarantula that needs only one cricket for a whole week. It is a good idea to refer to a complete beginners guide, if you have any doubts.