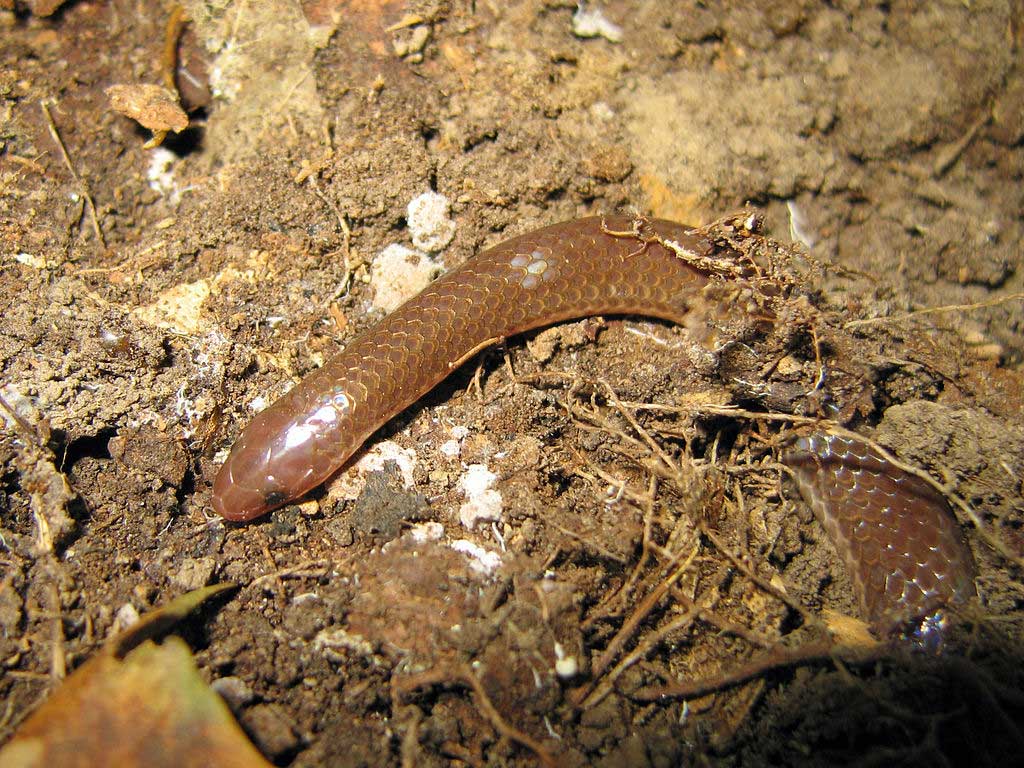 Several snakes are called by the common name, worm snakes belonging to the genus Carphophis. The Snake Carphophis Amoenus is also the Worm Snake. The common characteristics are small size,  resemblance to earthworms, very small or non-functional eyes and predominantly subterranean habitat. They have an alternative common name, Blind Snakes. Not many people are sure whether these are really snakes or worms.  The worm snakes are really snakes.  There are a couple of myths surrounding worm snakes.  One myth is that they are lizards with minute legs. Another fanciful myth is that  the Worm Snakes are the offspring of male snakes and female worms. Worm snakes look more like worms than snakes. They are usually 7.5 to 11 inches long.  The pointed head is brown colored on top  and, the belly is pink. They have smooth, opalescent scales.  The juvenile snakes appear darker than the adults.  The heads and upper body are plain brown without patterns.  The underside is pink colored, again without patterns. The pink color extends to the sides of the body.  At birth,  juveniles are also without patterns, albeit with darker color. Females lay 2-8 eggs in June or July  The eggs hatch in late summer  When you try to hold the snake in your hands, it will try to push its way between the fingers, using both the tail and the head.

Worm snakes are Fossorial.  This means that they burrow under the ground and spend most of the time there. You scarcely see them above ground.  If you do, they will be concealed beneath rocks, logs, leaf litter or debris. Their diet mainly consists of earthworms.  Their predators are probably birds, mammals and other snakes.  They make use of their pointed tail to escape from captors.  They are harmless to humans. You usually encounter them in forest habitats, especially deciduous forests.  In the plains, you can commonly see them in forests near marshes or swamps. Like most other small fossorial animals, we can find them inside rotting logs, in loose soil, under rocks or leaf litter.  Worm snakes are very common in West Virginia, although they are difficult to locate because of their shy, secretive nature.

The females deposit their eggs in rotting logs or loose dirt.  The eggs take about two months to hatch. An enclosure measuring 2’ X 3’ will be sufficient for Worm Snakes. You have to provide deep mulch type substrates.  Do not forget that these snakes are burrowers.  Peat moss or sphagnum moss will do.  They will spend most of the time under the ground.  You can provide a tree branch for  basking.  You must heat one side of the to provide a temperature gradient for thermo regulation.  Maintain humidity levels of about 60 %.  Make sure that the cage is filled with dust.  Remember to mist the cage thrice a day.  They do not bite, so even children can handle them.

Make sure you add some hiding places.

Earthworms are the staple diet of Worm snakes.  They may also eat slugs, salamanders and larvae.   You can dig out earth worms quite easily.  We can also buy them from bait stores. They will occasionally eat caterpillars and spiders. Remember to provide a water dish.  Make sure that the water dishes are big enough for your pets to soak.

Make sure that you support the full body of the snake, when you handle it.  Do not make any sudden movements.