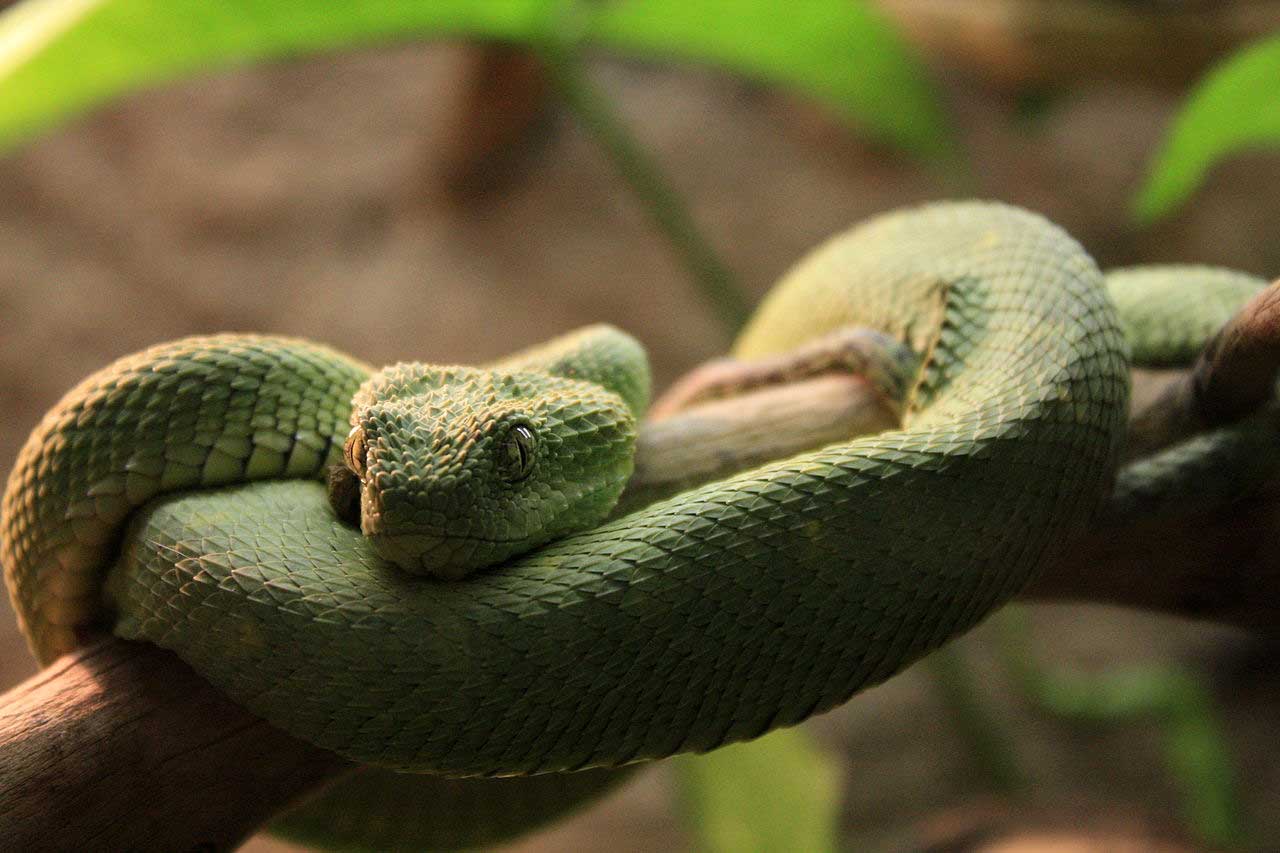 The viper snake has hinged, long and hollow fangs (Solenoglyphous) that can inject lethal toxins and that is the reason why it is considered among one of the most venomous snakes found in the world. Vipers would generally ambush their prey and their mouths would open as wide as 180 degrees when they are ready to strike. They close their jaws on impact and the potent muscles around the poison glands deliver the venom through the fangs. These strikes are usually aimed to stun a prey, but there are times when these strikes are used in an act of self-defense. The viper family consists of 30 genera with species that number over 200 and includes puff adders,  Lance heads  and Rattlesnakes.You can find the vipers in a variety of places, including trees, water spots and deserts, but they are mostly terrestrial.

The Viper belongs to the family Viperidae. You can list among more than 200 species of most dangerous venomous snakes under the two groups, which are:

Pit vipers of the subfamily Crotalinae and the true vipers.  Pit vipers, with over hundred species,  are characterized by sensing pits between their nostrils and eyes and include the North American species such as the rattlesnakes, water moccasins and copperheads, Malabar pit viper, Russells Viper, Indo-Malayan Mountain Pit Viper, Mangrove Pit Viper, Mamushi of Japan, Horned Desert Viper, Wagler’s Pit Viper, the Eyelash Viper Snakes and many others.

The True vipers that are devoid of the pit organs and include around 50 species in Europe, Africa and Asia, including the European viper and the Gaboon viper.

The Viperidae or the Vipers actually belong to a family of venomous snakes, which you can find all over the world. All of them have relatively long; hinged fangs which are capable of penetrating their prey strongly and are fatal to the creature. As of now, four subfamilies exist, and they are also known as Viperids.

The Viper snake is relatively shorter than many of the snakes that are available on the earth. They are usually 50 to 65cms long, but the vipers have a very robust body. While some of them have red eyes, some have yellow eyes, which give them the appearance of a very scary creature. Their skin color can vary from yellow to green.They live in the forests and are very colorful. Those living in the rain forests, prefer marshy lands or small mountain caves. Their bright colored skin helps them in survival.

The biologists define the Viperinae or the Old World Vipers as short and stocky snakes that would have wide and triangular heads and also rough and keeled scales. The dull or cryptic color of their body gives them enough advantage when they are trying to hide from the naked eyes of their predators or even when they are trying to hunt their prey. Records show that most members of these types of snakes would give birth to live youngs.

The Pit Vipers are quite different from other vipers because, they have a pair of heat-sensitive pits on the either side of their head, which are located exactly between their eyes and nostrils.

The Pit Vipers, in the New World,  live in various conditions like that in deserts as well as in areas which have rainforests.

Anyhow, the true or Old World Vipers live in deserts or in the forests of Europe, Asia, and even in areas of Africa. They are slow, stocky and very broad-headed. Except in Antartica, you can find them everywhere, including Australia, Asia, Newzeland, Hawaii, Madagascar, Ireland and so on The viper snakes are able to breed only when the female would let the male to copulate with her. During the month of August, the female would give birth to 20 live young ones , and they would be well fed by the mother and only after then would they come out. The young snakes are set free to live their life in the wild.

The Viper snakes are very terrestrial in nature and so, they would spend a large portion of time on the ground. They would require an enclosure which is of at least 4ftx2ftx1.5ft in dimension. The more space you would provide the snake with, the healthier its lifestyle would be and provides the safety to handle a venomous snake. Make sure that the enclosure is escape proof and lockable, because they have strong muscles which can easily open a loose lid. A water bowl and a hide is a must. You can convert a trap box into its hide, as it is easier to clean and also will come handy on days when the snake is acting out.

A viper would require a temperature of about 28 degrees Celsius and a hot spot that is of about 31 degrees Celsius. A high humidity which is usually between 70 and 80 percent is essential. Because the snake is nocturnal in nature, a 25-watt bulb during the day is considered as sufficient lighting.

Vipers can easily gulp down rodents that  are one and a half times the very girth of the snake at its widest point. It is rather preferable that you feed previously killed rodent with a feeding tong,  as this would eliminate the risk of exposing the snake to any sort of injury and would also help you to remove the prey items that the snake refuses to eat.

Like all venomous snakes, this snake also should be handled very carefully for it has one of the most toxic venoms in the world and accounts for a large percentage of snakebites and deaths

You must handle any venomous snake with care. So an experienced  professional is the ideal kind of person who can actually keep these kinds of venomous snakes. Always remember, these are the sort of venomous snake, which account for a  large percentages of snakebites and deaths occurring around the world.