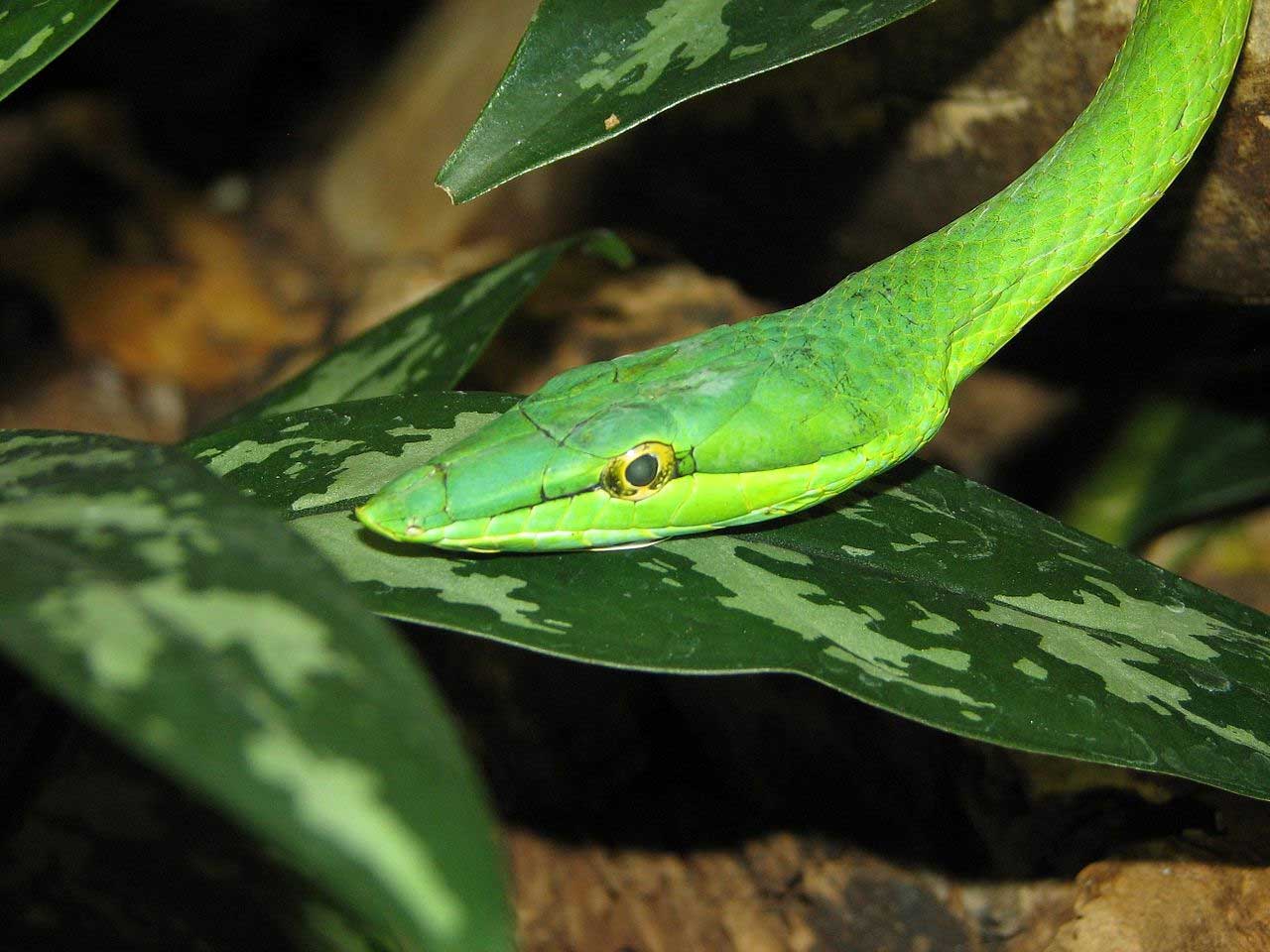 The Green Vine Snake  is biologically termed as Ahaetulla in Sinhala language,  or Ahaetulla Nasuta. This tree snake is a slim snake, green in color. We see these snakes in India, Burma, Cambodia, Sri Lanka, Vietnam, Bangladesh, Thailand and Burma. Do not confuse it with the green vine snake biological name of which is Oxybelis Fulgidus, which you can see  in the southern and central parts of America.

The Colubridae family of snakes is from the following varieties:

All these vine snakes have fangs with grooves under their eyes and even though there are poisonous, the majority of them are not harmful. The only vine snake that has caused death to the humans,  is the Thelotornis. The Vine snake Symbolizes the rear-fanged poisonous snakes that belong to the Colubridae family;  they have thin heads, slim bodies and their snouts that are pointed.

These Vine snakes are chiefly from the genus:

This belongs to a genus of tropical Asia and consists  of 8 varieties spread throughout southeastern regions of Asia, East Indies, India and Philippines

These African vine snakes, inhabitants of the subordinate districts of Saharan are distributed widely in Eastern Africa.

The Vine Snakes have pointed snouts extending as a dermal  outgrowth of the skin. The eye is bigger than the snout which appears like a beak. The snout length is double the diameter of the eye, or perhaps more,  without considering the appendage.
There are 15 rows of scales,  with 172 to 188 in the Ventral; the anal is divided and 140 to 166 in the sub-caudals. Their color is dull brown or brilliant green, the skin adjoining the scales are white and black on the frontal portion of the body, and  at a distance it looks striped. Below the lateral sides there are yellow lines.
They have a stretched body that is flattened at the sides; the length of the tail is over 1/3 of the whole length, which is about 0.75 to 1.5 m (2.5 to 5ft)

The Green Vine snake is active during the day and slightly poisonous. These snakes hunt with the help of their powerful binocular sight and usually eats lizards and frogs. They slither slowly, believing in disguising themselves like a creeper among the leaves. When perturbed, it bloats its body, exposing white and black scale marks. Besides, when they are threatened, they keep their mouth open and look in the direction of the predator. The well known legend on the use of this in the southern parts of India.
The Vine Snake is found in twin colors, the green variety inhabiting the rainforest regions and the brown or gray color variety dwell chiefly in the dry forests or in the savannas. The peculiarity of the Ahaetulla is its pupil which is in the shape of a key-hole and its placement lengthwise furrowed laterally on its snout, which help them to have a sharp binocular view. In contrast to this, the pupil of  the Oxybelis is round and that of the Thelotornis is elliptical and  horizontal. The confidence these Vine snakes have for protection and in hunting are their poisonous fangs and their disguise and the inflation of their neck. Their color goes along with the environment where they hunt frogs, lizards and birds. One of the devices of hunting is stretching their brilliantly-colored tongue inward and outward enticing its prey. The prey,  misunderstanding it for an insect or a worm on a branch moves towards it,. Certain varieties like the T. Kirtlandii and the T. Capensis give a shock to its predators by blowing up the part of the neck showing a frightening color on their skin in-between the scales.

The Vine Snake is a viviparous variety, it delivers tiny snakes, which develop inside the mother’s body, within the membrane of the egg. They are able to delay the fertilization (parthenogenesis is uncommon- still found in snakes). There is an incident of a female snake  kept in a zoo in London in seclusion in the month of August in 1885 delivered  delivered in the month August in 1888. The snake venom is meek and may lead to swelling. The symptoms, reduce in three days.