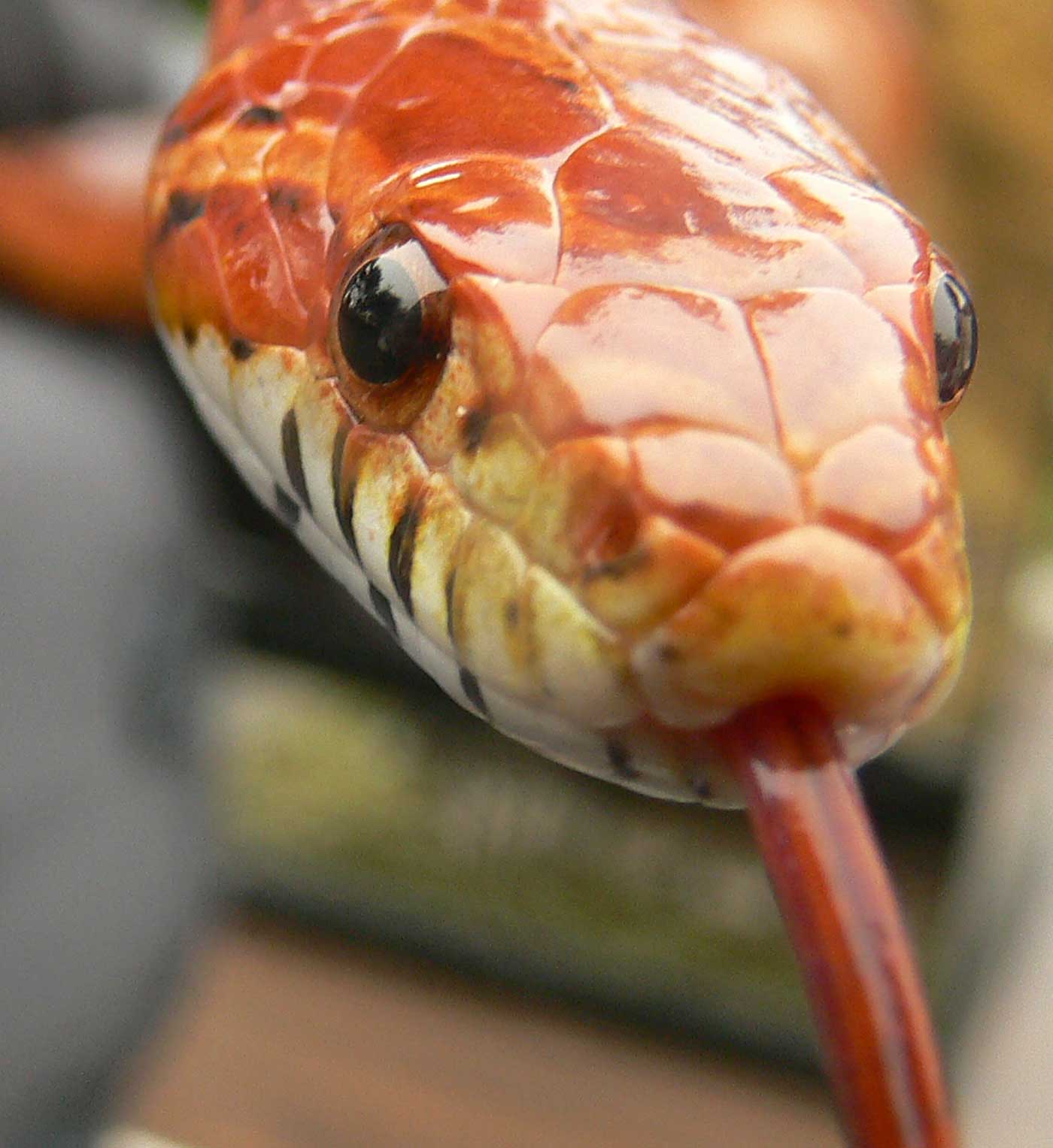 The  name Colubridae refers to a family of snakes having 304 genera  and 1938 species.  Coluber, in Latin, means snakes.  This is the largest family of snakes, accounting for about two thirds of all snake species extant. We can trace the earliest species of the Colubridae family to the period of the   Oligocene epoch.  The fangs of the Colubridae are not located at the front of the mouth.  They form an angle at the back.  So, they  also call them rear-fanged snakes.  Different from the Elaipids and the vipers, the Colubrids do not have hollow fangs.  They are grooved to channel venom, when they bite.  You can see the species of the Colubrid family in all continents except the Antartic.  Most Colubrid species are not venomous.  Some possess venom that are not harmful to human beings.  They are mostly harmless.  A few groups like the genus Boiga can cause potent bites of medical significance.  The twig snakes, the Boomslang and the Asian genus Rhabdophis  have caused human deaths.  We cannot call Colubridae a natural group, since many of the species are closely related to other groups like Elaipids, than to one another. The family typically has attempted to classify the snakes that are misfits elsewhere.

The large family of colubrids includes: Scarlet Snakes are a non-venomous species, belonging to the Colubrid family.  The scarlet snake is the one and the only member of its genus.  They are indigenous to southeastern United States.   Cemophora coccinea  has three sub-species.  Scarlet Snakes are comparatively small.  Adults reach 14 to 26 inches in overall length. Scarlet Snakes are egg layers (oviparous) and lay 3-8 eggs per clutch. Corn snakes are basically a North American species of rat snakes.  They overcome their small prey by constricting them.  You can find Corn snakes all through southeastern and Central United States.  They are docile, possess attractive patterns and are of moderate size (3.9 – 6)  feet.  Their reluctance to bite along with the other qualities make them very popular pet snakes.  Corn snakes are carnivores.  In the wild, they feed on rodents, amphibians and unguarded bird’s eggs from trees. Sonoran Kingsnakes or Desert Snakes are a sub-species of the common Kingsnake.  These snakes are nocturnal reptiles.  Desert Kingsnakes are very docile.  If they find themselves in a situation where they cannot escape, they just flip onto their back, lie still and play dead.  There are records of Desert snakes 6.8 feet in length.  Such sizes are rare and most reach the length of 3 to 4 feet.  Desert Snakes often have life spans of 10-20 years.

Desert Snakes are native to Arizona, New Mexico and Texas.  They are found in arid, dry desert areas.  It will surprise you  to learn that they are commonly found in damp conditions near water in the brush lands. They devour other snakes without any compunction. Desert snakes are carnivores.  In the wild, they constrict their prey to kill them.  They wrap their body around the prey and simply squeeze them till they give up. As pets, you must give them thawed out mice or chicks as a treat. California Kingsnakes are non-poisonous snakes that belong to the Colubrid family.  These snakes confine themselves  to the Western United States and northern Mexico.  It is a comparatively small subspecies of the Common Kingsnake.  Females lay eggs between the months of May and August, 42 to 63 days after mating.  California Kingsnakes are seldom Kingsize.  They seldom reach the length of 48 inches.  The most common length is 2.5 to 3.5 feet.  The California snake is one of the most popular pets owing to its attractive appearance, ease of care and easily tamed nature. Whip snakes belong to the species  Masticophis flagellum.  It is amember of the Colubrid snake family. It is also referred to as Coachwhio snake.  The snake is endemic to Mexico and the United States.  Whip snakes have  thin bodies with small heads, large eyes with round pupils.  Whip snakes are diurnal reptiles.  It means that they are active during the day as opposed to nocturnal that  are  active during the night.  They enthusiastically hunt and consume small birds, Lizards and Rodents.  They have good sight and are very inquisitive. You can often see them raising their heads over rocks or grass to see what is going on around them. Rough green snakes are literally what their name implies. They are rough, they are green and of course, they are snakes.  They are sometimes called grass snakes or even green grass snakes. But the name is more applicable to Smooth green snakes.  The rough snake is bright green on top with a yellowish belly.  This provides perfect camouflage in vegetation.  The rough snake can grow up to 116 centimeters (45.5 inches).  It is also very thin.  It feeds mostly on insects and  invertebrates. They will occasionally polish off some snails or tree frogs, just for variety. The milk snake belongs to the species of Kingsnakes.  Milk snakes have 24 subspecies.  They grow to 51 to 152 centimeters (20-60 inches). Their scales are smooth and shiny.  Their characteristic color patterns are alternating red-black-yellow or white-black-red bands. Lampropeltis Alterna or the gray-banded Kingsnake is a species of non-poisonous Colubrid snake family.  We can find the gray-banded snake in Trans-Pecos/Chihuahuan Desert areas of West Texas, northern Chihuahua and southern New Mexico.  They are of moderate size.  They can grow up to 4 feet long.  The average length is 3 feet.  They feed on lizards, rodents, frogs, and even snakes.  Alterna are egg layers (oviparous) and lay clutches of 3 to 13 eggs early in summer.  The eggs hatch in about nine weeks. Hatchlings are approximate 10 inches in length. King Ratsnakes aka Taiwan stinks are a species of the family Colubrid.  You can find them in southeast and East Asia.  King rat-snakes are large snakes with a total length of up to 240 centimeters or 94 inches.  They also call them Stink Snakes or Stink Goddess.  This is because of their post-anal glands.  When you  pick up the snake, the glands empty, emitting a very strong bad odor.  They eat everything, birds, beetles or snakes.  They seem to have a strong preference or snakes. A harmless Colubrid snake species, Baird’s rat snakes are confined to Southwestern united states and nearby northeastern Mexico. In the United States, you can find them in the Big Bend area in Western Texas.  You  can also see them in some Mexican states like Nuevo Leon Coahuila and Tamaulipas.   They feed mainly on rodents and birds.  Juvenile snakes feed on lizards.  They are egg-layers, and lay clutches of up to ten eggs.  The eggs take about three months to hatch. These snakes go by many names.  Pilot black, Black snakes, Texas and  black Ratsnakes.  They belong to the non poisonous Colubrid family.  You  can find these snakes all through east and central U S. You can see them in southern Ontario in Canada.  In the eastern United States, you can find them in northern New Jersey, Southern Vermont and Eastern New York.  Adults can often grow very large  from  3 feet  6 inches to 6 feet,. Black snakes are the largest ones in Canada. The record in overall length is  8 feet and 5 inches.  They are constrictors, which means that they coil around their prey, suffocate them and then feed on them. Tiger  snakes go by many names like Striped Cat or Tiger Cat Snakes.  They are a species of Collubrid snakes.   We can find them throughout central, southern and eastern Africa. They range from the Congo to Tanzania and up in South Africa.  Tiger snakes are a  very colorful. Species.  They feed mainly on lizards,.  They seem to have a special liking for geckos.  They also consume small rodents and bird chicks,.  They can strike readily, but the poison is not deadly to humans.    Tiger snakes become tame rather quickly. You can feed them geckos.  Larger snakes of the species can consume half-grown snakes.  Tiger snakes are oviparous or egg layers.  Females lay anywhere between  half a dozen to many dozen eggs in leaf litter in a damp place. The Boomslang is a large poisonous snake species from the family Colubridae.  The average adult length is 100 to 160 Centimeters.  Some exceed six feet in length.  The eyes are unusually large and the head is egg shaped.  They are egg layers and lay up to 30 eggs,  which they deposit in rotting logs or hollow trunks of trees.  The snakes are very active during daytime (diurnal) and spend most of the time high up in the trees (arboreal).  Members of the Colubridae  family are harmless to human beings due to the small venom content and insufficient fangs.    The Boomslangs are remarkable exceptions.  The snake can deliver potent venom through their large fangs situated in the back of the jaw.  The venom brings about blood clotting  and the victim may die due to internal and external bleeding.