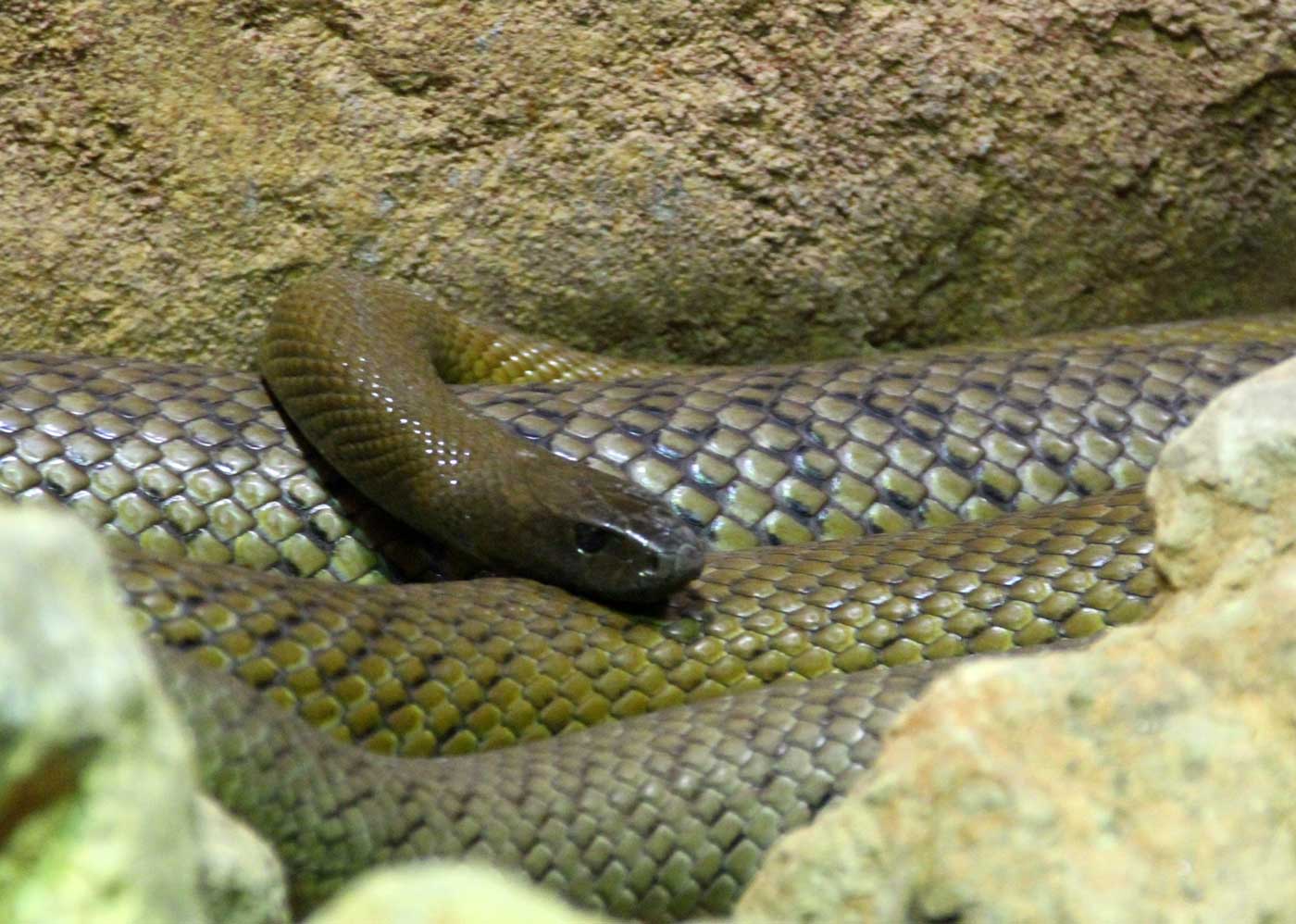 Taipan snakes belong to the genera Oxyuranus, This snake moves very fast. It is big and very poisonous,  and belongs to the Elapid family from Australia.  At present there are 3 varieties that are identified, among these.  One  is the coastal Taipan, this is further divided into two types. The  Taipan snake  is known as the deadliest land snake of all.

All the varieties included in this genus have a strong venom, highly toxic to nervous tissues, combined with other toxic ingredients which affects victims in different ways. This venom numbs the person’s nervous system, leads to blood clotting, which further blocks the blood vessels and continues with a host of problems to do with clotting. The Taipan snakes are capable of growing up to 3 m long. It is the longest venomous snake in Australia. It is generally known by the name Coastal Taipan. This Taipan snake has no markings and is colored pale olive to deep russet brown. Few of the exceptional ones, hailing from the Tully regions of the Northeast Queensland are colored black.

When compared to the other parts of the body, the head is pale in color, the eyes are red and mouth pink in color.

In spite of their treacherous status, Taipan snakes are a very isolated type,  and there has been  no incident of a person getting bitten,  except for herpetologists, who handle the snakes.

The Taipan snake dwells in the grasslands, dunes of grassy beaches, heaths of the coastal regions and cultivated regions like cane-fields that are in the extreme northern parts of Australia descending to the coastal regions of Queensland, and further you can see them  in the Northern provinces of the New South Wales.

Most of these snakes depend to a great extent on the most liked prey that is available.  The year in which the crop is rich, the population of rats increases, which simultaneously increases the number of these dangerous snakes.  In the similar manner, in a year when the crop is poor the rats and snakes die due to shortage of food.  The female Taipan snakes lay from 12 – 20 eggs in a clutch, in burrows that are deserted by animals or in deep crevices in the soil. You can start raring these Taipan snakes  in cages of 400 x 600 x 600 mm with the top open and placing a substrate of newspaper, a water bowl made of ceramic and a trap box. Heat the cage with a 140 watt light bulb provided with a thermostat to cut off at 31°C. A fluorescent tube of 12 connected to a timer enables the snake to get light/darkness for a period of 12 hours. These cages are fine till the snake attains the 1200 mm level; then, is not safe when the snakes repeatedly crawl out to fetch the rats. You can consider keeping the snakes now in similar,  but bigger cages of size (800 x 800 x 600 mm).

In the beginning they feed on fuzzy mice. You can feed them every 4 days with a standard quantity of 3 fuzzy mice. Continue this practice for a period of three months by which time they will attain a length of 750 mm. You will never experience snakes consuming so much food and defecate that much quantity, giving you a lot of work. The live mice were killed and eaten. The time between the striking of the mice and its death is only about  three seconds! On observing this incident you lead to a novel admiration for the poisonous Taipan snakes; totally remarkable reptiles. When they are about thirteen months old they consume grown-up rats chasing one after the other. It is very fascinating to observe these snakes’ feeding habits. Prior to giving the mice one or two sudden, speedy precision strikes the snakes make a thorough study of their prey and then strike at the point (shoulder or head),  and observing it die.  Prior to consuming the head of the mouse they go after the smell of their prey. They normally empty their bowels between two days after a feed, and then they continue chasing their next prey. Some snakes alter their feeding habits as they grow, a factor that is prominent with Coastal Taipan snakes. An adult snake will   strike the prey and leave it,  whereas, a young one strikes the prey and grips it for a time. This feature may be to safeguard themselves from  the sharp teeth of rats, small mammals and mice which they consume in nature.

Only very experienced snake handlers should attempt to handle this most  venomous snake in the world.