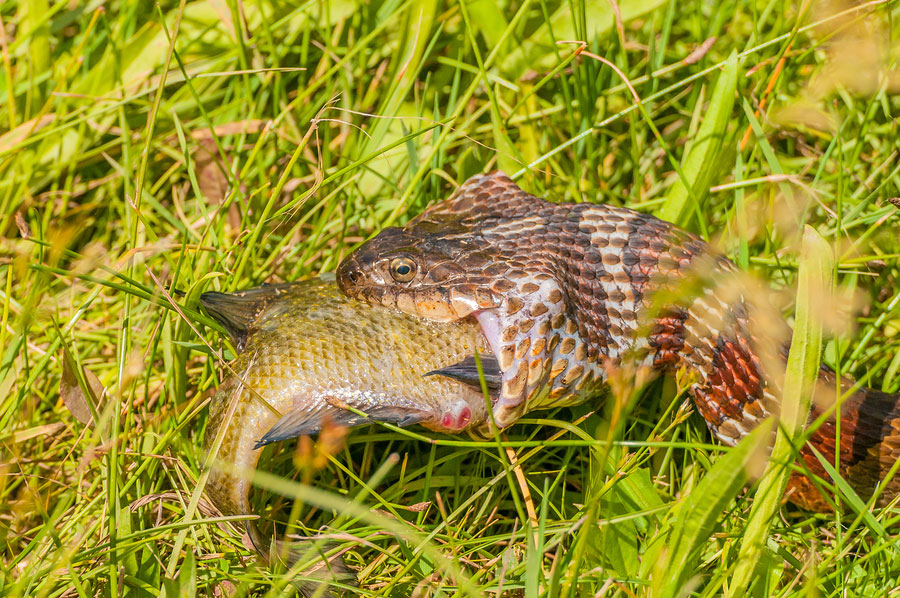 The study regarding the diet of snakes always invokes our curiosity. Every snake is zoophagous (consuming other creatures), they eat animals. None of the snakes are vegetarians. These reptiles are carnivorous. Huge snakes consume large animals. Smaller snakes  consume smaller animals. Invertebrates and insects constitute the diet of the tiniest snakes except for those snakes that eat eggs. The snake predates smaller preys by swallowing them with less effort. Bigger predating snakes use their muscles to mash or poison their prey in order to eat them. Snakes eat whatever they get, their common resource for food are frogs, rats, chicken and the like The diet of the snakes varies according to the season, the animal that is available in plenty becomes their prey. Their diet counts a lot on their growth.

Snakes are feared by most of us as they are a danger. The reason for being afraid of the snakes is because they make their meal by whatever prey they choose. Snakes go foraging in different ways, the  diet of snakes depends on the situations, their locality as well as to which species they belong.

None of the snakes are vegetarians; every variety is carnivorous. Their food determines to which species they belong. A few of them particularly consume warm blooded animals (birds, rodents, rabbits), whereas the others consume earthworms, slugs, eggs, other kinds of reptiles, fish, insects, amphibians or frogs. The snakes swallow their food in one piece. It is essential to learn about the usual diet of every species of snake. The well-known pet snake normally consumes prey like gerbils, hamsters, frogs, rats, chicken, and the like. A big sized pet snake can swallow even a whole rabbit. Every snake is capable of un-hinging their jaws to swallow their prey in one piece.

The geographical features usually determine the diet of every snake. Certain snakes changed greatly in consuming animals they come across.

Perhaps, the food that is easily consumed by the snakes is insects.  The insects that are on the ground do hum,  thus enabling the snakes to catch them with their mouth.  Insects are not enough to fulfill the appetite of the snake, but they suit temporarily  until the  snake can get a  prey that is sufficiently big to satisfy it. Many varieties of snakes generally consume different  types of rodents in addition to rats. You can feed Pythons in captivity with mice for instance, as they  are not expensive, but constitute a nutritious source of food,  nevertheless. In case you do not prefer feeding your pet snake with live creatures, then thaw the mice and  feed your pet with the frozen mice.

At times snakes that dwell around the water bodies consume fish. The right size fish chosen to eat by the snake depends on the size and variety of the snake.  Bear in mind that the bigger the prey the longer is the period of digestion. Perhaps, the most common diet of  snakes includes  reptiles and amphibians. Amphibians like tadpoles as well as frogs are entrapped without difficulty and given to snakes as food.  Also, larger reptiles are trapped by the fierce snakes.

A number of snakes have a particular diet comprising of either one or two types of prey. For instance, the Crayfish Snake has a specific diet. The molting crayfish is the restricted diet of the crayfish snake. There are several other types of snake they eat only one or two types of prey; therefore these snakes are named after their specific diet.  Snakes, do not appear able to eat anything bigger than a bug, but the sheer size of the prey they can consume will amaze you.  Amazingly snakes do eat bigger animals. The pythons and anacondas are examples of this.

In certain instances, a snake need not necessarily bother of driving away the bird from the nest in order to eat the eggs. Snakes that are sufficiently big to swallow a bird, kill the parent and then consume the eggs. Big snakes that can coil around the bird within their grip,  diet on big birds like chicken. Young birds are an easy source of food. Water snakes consume different types of fish varying from minnows to big bass, varying on the size of the snake.

The majority of the snakes kill rodents either by coiling around them, squeezing them and squeezing  them, or by their venom.

Bigger snakes with sufficient muscles or venom will kill and consume bigger animals. For instance the green anaconda is famous for having a feast on pigs; It squeezes the animal to death in its enormous coil prior to eating. Big snakes feed on anything they get, from dogs to cats. Several snakes have eggs as their diet. They are also animals, but at a prime stage of growth. They also target on young birds in their nests.

Snakes that are venom less, and those that do not constrict their prey, diet on tiny prey like small rodents and insects which they comfortably catch in their mouth and gulp down.

The diet of the infant snakes varies according to the species they belong to. The majority of them feed on lizards, tiny fish, earthworms and insects.

Because the diet of snakes consists of anything they get, it becomes easy for owners of snakes,  and many of the snakes avoid diet-related sicknesses that other pet reptile exhibit. This is because the usual food the snake has,  is a balanced and complete diet. A snake that feeds on rodents, for example, has a balanced and complete package of nutrition with mouse for example. Nevertheless, certain people abhor feeding live animals to their pet snakes. If you are upset about giving your snake killed rodents and observing them eat it, perhaps a snake is not the right choice for your pet!

Even though it is possible to give living, unweaned tiny mice (pinky mice) to younger or smaller snakes, normally you would do well not to feed your pet snakes with live prey. Better feed your snake with freshly killed, or a prey previously frozen. It is not necessary that you yourself kill the prey, since the majority of the pet stores give you frozen or freshly killed “snake food”. There are many reasons why you need to feed your snake with dead animals. First and foremost live prey will undergo a little psychological stress or horror as they are hunted by the snake, unless the snake kills and eat them right away. Secondly, it is possible even for a tiny mouse to bite and brutally harm your pet snake; if your snake is not hungry, it is possible for the mouse to kill it!`

In case you need to take care of your pet, seriously, think of training your snake on eating dead prey. The moment you decide to give live prey to your snake, make sure it is hungry and it will at once kill and eat the prey and you can observe your snake perform this with safety. Never let a live prey remain with your snake any time. Be certain the snake has killed its prey prior to your leaving

A snake can stay alive in the absence of food for a considerable period. A single meal will suffice for a long period, the reason is:

1. They never require a great deal of food to have control of a stable temperature.

2. They stay inactive for a considerable period of time and thus make use of only less energy.

3. Their tissues that store fat are widespread. While abstaining from food for a long period, they survive with this accumulated fat. The Feeding Habits of the Cobra Are Extraordinary:

Snakes Evaluate Their Prey Before Hunting

Certain snakes such as the Tentacled Snake feed on water plants other than fish. Do not misunderstand that a snake snatches any prey that crosses it. They make a study of the prey they intend to catch. In case the prey is insufficient for a meal, then it forgoes hunting it. When certain prey seems bigger for it to gulp, then they quit attacking it.

We come across snakes that are specialists in snails. They tactically omit the shell and eat only the snail. Snakes such as the Thirst Snake, the Brown Snake and the Southeast Asian Snake that eats snails, adopt various techniques to extract the snail from the shell in order to consume more snails, avoiding the shells.

Still, many people have a superstitious belief that snakes drink milk. The truth is that snakes have an aversion towards milk. Besides, scientists have established that if the snakes are compelled to drink milk they become ill.