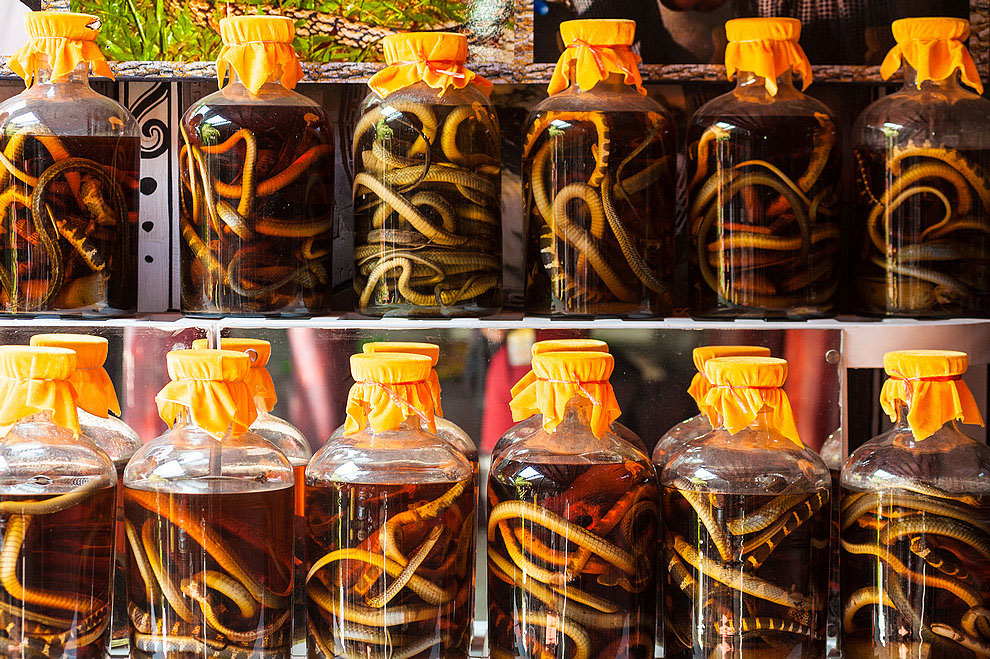 Snake wine, known because of its ability to reinvigorate a person according to Chinese medicine, is an alcoholic beverage that is made by infusing an entire snake in rice wine or grain alcohol. This wine,蛇酒 pinyin: shéjiǔ; rượu rắn in Vietnamese, was first recorded to have been consumed in China during the reign of the Zhou dynasty and it was known to have curative powers in it. Such drinks are available, widely throughout Southeast Asia, as well as in China and Vietnam.

The venomous snakes are not really preserved for their meat, for obvious reasons. So they are infused in the drinks to extract their ‘essence’ and to dissolve this in the alcohol. The venom of the snake is usually denatured by the use of ethanol and the protein in it is unfolded and this makes them inactive.

Possibly, it is the Huaxi street night market of Taipei, Taiwan that is renowned for the availability of the snake meat and food that have snakes in them.

Snake wine has enjoyed a reputation for their curative powers for over thousands of years.

Snake wine, liquor, which you  widely find in parts of Asia, they say, cures certain health issues. This wine has a reputation for curing back pain, rheumatism, lumbago. Another conjecture, by many on the use of snake wine is that it increases  male virility.

Now, to attain the said ‘essence’ it is important to immerse the snake completely in alcohol. So, in the bottles we find such snakes placed carefully. Sometimes you can find small snakes in the bottle as well, which are placed along with some medicinal herbs.

The snake is made to steep in the bottle for quite some time before they consume it for health restoration, for strength and vitality, in the form of shots. The snake wine is poured into a very large glass decanter which has a tap at the bottom which makes it easier to serve.

‘Ruou thuoc’ or medicine wine is available in large numbers in Vietnam. Research shows that there are over 100 forms of such wines available in the market, which might even have some small animals infused in the bottle. There are endangered species too, which you might find in the bottle.

A Chinese website Dbtw had quoted that if a snake is kept in a non-airtight vessel which has enough oxygen, the snake will enter into quite a similar state like hibernation which would allow them to live for longer periods of time.

Eating snakes and other reptiles or small animals are not that uncommon in parts of Asia. Moreover, it has been a part of their legacy as well. Many such animals are being prepared as a part of their traditional food and are being cooked in very many ways by using various herbs, spices, ginger and garlic, all of which enhance the flavors of such delicacies.

How Snake Wine is Prepared in China?

They first hold the snake with clamps that they secure with their foot.

They then hold the snake by its tail, make a small cut near the head, and use a pair of scissors to slit the skin from tail to the snip in the head.

They take out the innards while they gut the snake and rinse it in two alcohol solutions.

Then they insert the still live and wriggling snake into a glass jar with herbs along with the heart of the snake until the jar is two-thirds full.

They then pour wine or alcohol into the jar, when the snakes will writhe in pain.

Snake wine is best when preserves for three months.

Traditional Chinese medicine practices have always considered the tissues that the snakes have and even the snake as a whole to have the ability to promote vitality and health. As already mentioned earlier, the very first time that this drink was consumed, was during the reign of the Zhou Dynasty in China and it first appeared in the medical manual Shen Nong Ben Cao Jing, compiled between 300 B.C and 200 A.D. You can find the detailed use of the snakes and the snake parts in the medical manual named Bencao Gangmu of Li Shizhen in the Ming dynasty.

Over a varied region of Vietnam, Asia in the southeastern areas and the Southern parts of China, you can easily find Snake wine. Only two types of snake wine are available around the world:

Steeped kind: This is the kind of the drink in which they place a large snake in a container which has rice wine, and left there a very long time, along with medicinal herbs. Later, once the right mixture is ready, they believe it has the power to restore strength in your body. The brew they consume in the form of shots.

Mixed kind: The body fluids that one gets from the snake is mixed with wine and immediately served as shots. The wine made out of snakes blood primarily, usually by slicing the snake’s belly, then draining out the blood and is directly poured into the container which containing either rice wine or any form of grained alcohol. While on the other hand the snake bile wine is made out of the contents which can be derived from the snake’s gall bladder.

Snake parts and their venom have various attributed medicinal values. They have even cured farsightedness and hair loss and are also a good agent to help one to attain great sexual performance. People in Vietnam consume this snake wine because they believe its ability to help bring about some sort of improvement in their health as well as in their virility. Similarly, other wines which involve wild animals include a drink that has a gecko or even sea horses infused in alcohol. Because there is a high percentage of alcohol content in the snake wine, they traditionally serve it in shots,. For those who have a brave heart, they are even ready to feast on the various parts of the snake like their gall bladder or even at times, their eyeballs and the stomach as well.

To export snake wines across countries is illegal since cobra wine or even other snakes used for wine making often belong to the race of endangered species.