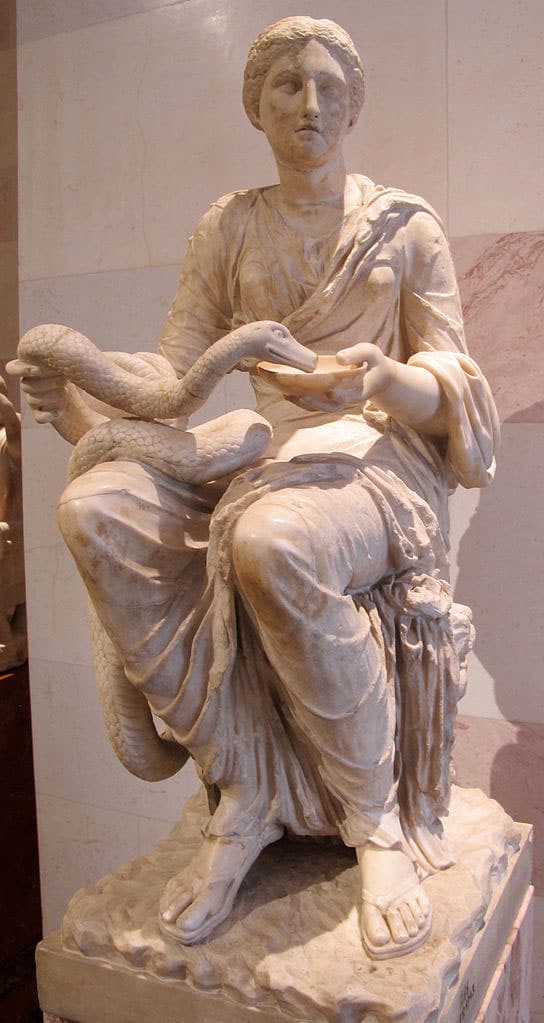 The snake or serpent is among the most widespread  mythological symbols. The word serpent derives from the Latin word Serpens, which means an animal that crawls, or a snake.

In certain traditions, the snake was the symbol of fertility. For instance,  North America’s Hopi people carried out a yearly snake dance honoring the joining together of Snake Youth (a Sky spirit) and Snake Girl (an Underworld spirit), and  also to revamp the true fertility of nature. In the process of the dance, they would bring living snakes, and when the dance concluded, they would let go he snakes in the field to ensure a good crop. The snake dance is an offering to the spirits of the thunder, the clouds and the lightening, hoping that rain showers on the growing crops. Yet in certain civilizations,  snakes were a symbol of the umbilical cord, uniting people to Mother Earth. The ancient pictures depict the  Great Goddess with snakes around her  holy staff, similar to the ancient  Crete – besides glorifying them  as protectors of her anonymity of birth and resurgence. The impression that comes to our mind when we attempt to find a symbolic meaning for a snake, is the Book of Genesis in The Bible and the story of Adam and Eve flashes in our mind. According to the Christian belief, the snake is a symbol of evil and temptation,  and serves Satan. The snake is also  a main character in most of the fairy tales, legends and cultures, and of course, in matters of religion too in both the  Eastern and Western Countries. Besides its implication  in the rituals and tales, it also possesses features such like the quickness with which it springs from small crevices and  barren fields and pounces upon its prey, the hazardous hissing sound, spiraling  body, shedding of its skin, and its complicity  with trees like in the story of Genesis and its split tongue.  On account of these vibrant qualities, the snake plays a vital role in religious ceremonies, all over the world.

The Snakes have various significances in many of the tribal communities of the Native American. Some customs relate the snake to reincarnation; the Ojibwa customs symbolize the snake to possess healing power on account of its capacity to discard its skin, and the Pueblo tribes believe that the snake is a symbol of fertility. All these cultures believe that the snake is a benevolent living thing, whereas several traditions consider the snake signifies the Underworld and is emphatically related with the serpent, which is actually a big snake and normally portrayed as monstrous.

The Egyptians and Snakes

Perhaps most people know about Egyptian history. According to the traditional Egyptian myth either Gods or four powers created the world. One of them was the Sun God of Amun-Ra, who took a snake’s form and appeared from the water in order to inseminate the cosmic egg. The other gods had created this cosmic egg. Thus, many believe that from this cosmic egg every life on this globe initiated. Obviously we are aware of the fights between Osiris and Seth, the judge and lord of the dead. The brother of Osiris and Horus Seth’s father attempted to assassinate Osiris and own the world. A God called Hathor took the form of a venomous snake named Apep and killed the prospective murderers. The ghost of Horus, people believed, dwelt in the wheat fields and this field was also protected by this particular snake. By this we consider the wheat sheaf as a sign of reincarnation or re-living.

On a subsequent occasion, they say, The God, Isis, took the form of a cobra spewing fire (named Uraeus according to the Greek) and signified that the holder of this symbol knew the undisclosed truths of this materialistic world. Thus, as a sign of royalty and sovereignty the Pharaohs adorned this symbol of Uraeus on their heads. The indication of snake adorned with the head symbolizes the supposed third- eye, implying that one cannot hide anything in this world or the next. Caduceus Staff as The Symbol of Commerce

Those who practice Yoga interpret this in a similar manner, they expound that everyone’s inner strength lies embedded in them as a coiled-up snake. The practice of yoga makes this snake to stretch itself within the many Chakras, and ultimately end up in the head forming the third head.

Above all, the Hindus too, adopt the belief that the moment they rouse the spirit or the snake by consistent and firm practice of religion and attain perpetuity, it is possible for one to attain the eventual status of humanity.

Snake plays a vital role in Greek mythology also. They say that at every end of the world, Zeus, King of the Gods, set free two eagles, and the center of the world was their meeting place. This was the earth’s center, occasionally called the Navel of the earth and a snake named Pytho protects it. They built the Oracle of Delphi, named Pythia over this Navel. This Oracle seems to have had a vital role to play in the life of Pythagoras.

The Chinese Legends also accept the snake. The Chinese believe that two intertwined snakes encircle the world, this is a symbol the wisdom and power of the creator (Ying Yang). They believed that the snake was the cause of the destructive floods, because the water’s movement appears similar to a moving snake.

The Aztecs also had great respect for snakes that they call Quetzacoatls, which is more or less difficult to pronounce. This snake had feathers to enable them to communicate with the Gods. Have you heard of this familiar story of the Aztec King, who, is in search of eternity, and to discover it, entered the sea on a raft loaded with snakes. The fortune-teller argues that there will be a day when a new God with blue eyes, long blond hair with a sparkling armor would emerge from the seas. When the Spanish conquerer Ferdinando Cortez invaded Mexico in 1519, it was linked to this prophecy.

The Aborigines of Australia view the snake in the form of a beast that will transform them into a man if they ate them greedily as boys and they would reappear as a man. Are you not familiar with the tale of Jonas’s voyage into the sea, when a whale swallowed him and discharged him as a new man after three days? This simulates Baptism, which happened on Easter in the river Jordan, in which people dipped in water, with the belief that an underworld beast would consume their soul and regenerate them as new men. According to these stories, such people are named differently after this re-birth, then belonging to a new category of people. Is this not a common occurrence in our life, where we attain different degrees of comprehension and attain new levels of stature and titles?

The Snake As A Duality Rod of Asclepius, Associated with Healing and Medicine

From these illustrations, it is possible for us come to a conclusion that the snake has negative as well as positive likeness. According to the negative aspect, it leads to flooding, destruction and death while the positive aspects contribute to the true forming of the world. Hence the snake is normally depicted as a duality.

The Books of the Dead” teach us that snakes first approved Ra when he emerged from the surface of the water, thereby relegating snakes to the lowest stratum of life. Hence men, who we recognize as at the peak of life’s strata, wear a snake similar to an apron, repeatedly let us know of our humble origins, and what we are on the lookout for.

In the Book of Numbers, for instance, we hear of the story by which God’s messengers, the serpents were responsible for the death of several children in Israel. The same serpents revived God’s favorite children.