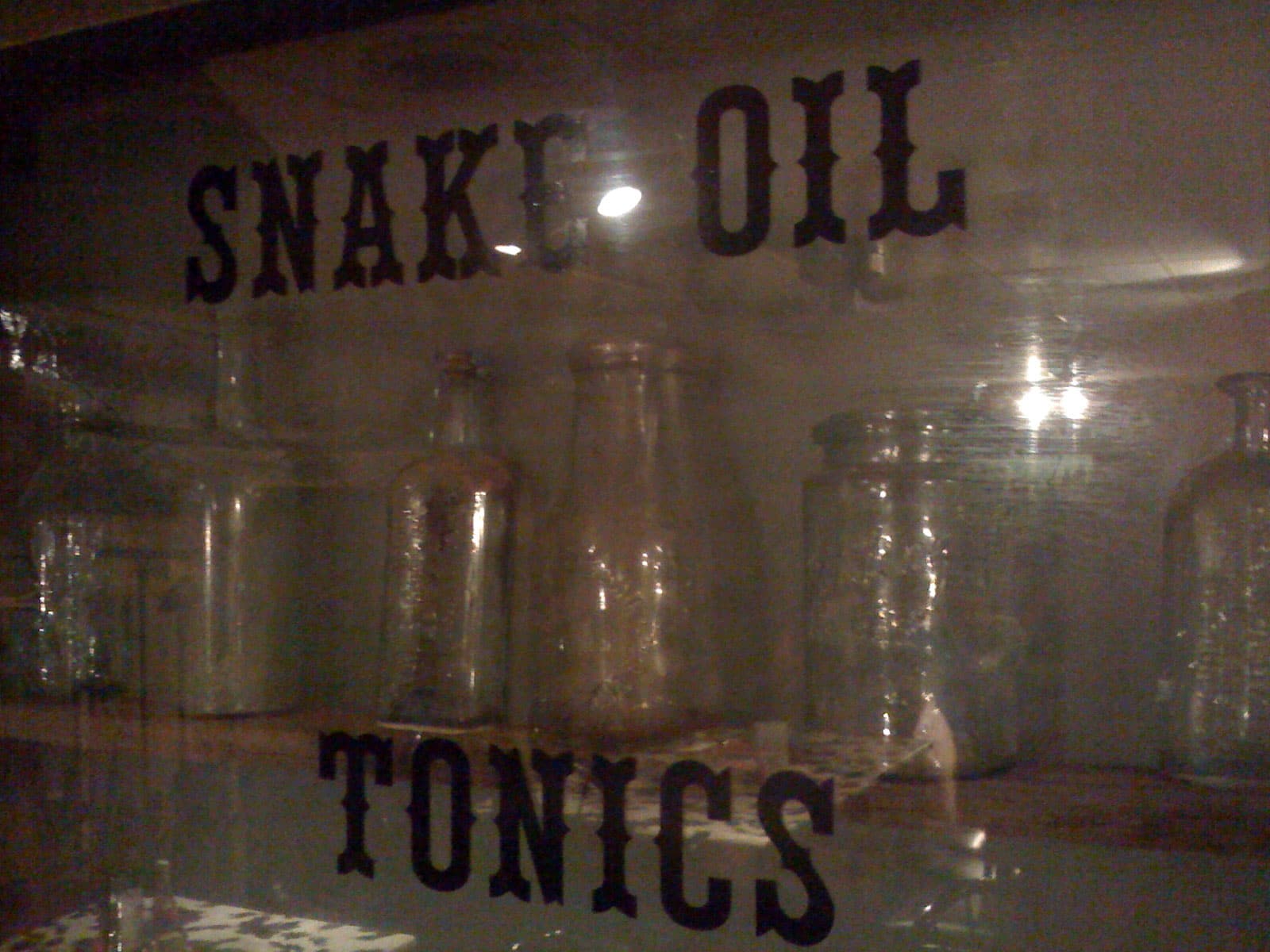 Snake Oil originally meant a fraudulent health product or a product of unproven medical value.  Today, Snake Oil, refers to all products with dubious, unverifiable or questionable quality.  Logically a snake oil vendor  is a person who knowingly sells fraudulent products or is a charlatan or a fraud or a quack.

Salesmen who sell these products make tall claims of its wonderful powers.  There is usually a lot of hype that accompanies the product.  The snake oil seller works in tandem with or utilizes the services of paid accomplices who testify to the miraculous powers of the product, quite volubly.

The origin of the snake oil is from China.  A lot of people believed that rubbing snake oil over sore joints would give instant relief.  The fame of the Snake Oil and its miraculous powers soon spread to England.  The people there just laughed off the tall claims made by the promoters of this ‘Wonder Cure’.

There are two schools of thought regarding how the term came into being.  The popular theory believes the term  has its origin in western  US on the basis of a local preparation in  which Chinese water snakes were  the main ingredients. They must have been used by the Chinese workers for the treatment of joint pains. The preparation must have reached travelling peddlers  (salesmen)  with accomplices planted in the crowd to testify to the efficacy of the ‘wonderful medicine’.

The second hypothesis is that the product originated from the east of the united states.   Native Americans living in New York and  Pennsylvania used to rub petroleum from natural oil seeps over cuts and wounds.  The product was bottled and sold by the European settlers as a miracle cure for all ailments. They called it Seneca oil in recognition of the native tribes of the area.  This is  folk etymology without any evidence to support the claim.

The Chinese laborers working on the railroad gangs of Transcontinental Railways initially sold the products to the   Europeans to treat joint pain. It was claimed that the product would provide relief when applied over the affected area.  Salesmen of competing products,  ridiculed the claim, and in the course of time, the term ‘Snake Oil’ evolved as another name for products promoted as miracle drugs or as panaceas.  The ingredients were kept secret.  These products are usually inert and ineffective.

The system of patenting medicine started in England as early as 1712. There was no regulatory system for drugs in the United States till 1906. The medicine manufacturers or medical salesmen did not have the knowledge to research to verify the ingredients of the snake oil. In short, Snake Oil turned into the synonym of a Hoax.

Snake Oil Salesmen became stock characters in western films; ‘doctors’ with uncertain qualifications who would sell their medicines with a lot of hype. They would support their claims with a lot of pseudoscientific evidence. They would be supported by ‘Shills’ or accomplices who would endorse the wonderful powers of these products. The quack would slip out of town quietly before the customers realized the real value of the products. Grifting is the name of this practice and that is why the pseudo doctors have got the name “grifters.”

A Comprehensive Cure To a Hoax The compositions of the snake oil products showed marked variation. Snake Oil of Stanley’s, manufactured and marketed by ‘ Rattlesnake King’ Clark Stanley was analyzed by the US Government and i5 contained red pepper, turpentine, mineral oil, camphor and some kind of fatty oil, presumably beef oil.

The composition of the snake oil medicines varies markedly between products.

The composition Is very much like that of contemporary chest rubs. There is no connection to actual snakes at all in the preparation.The government filed a suit and won against Stanley, the manufacturer. After that, snake oil turned synonymous with false cures and salesmen of this oil, were likened to charlatans.

A salesman who sells snake oil is one who tries to make you buy something that is supposed to benefit you. The result can be quite contrary.

Snake Oil salesmen are not an extinct species. You can see them on Television, trying to sell you a host of wonder products.

The Snake Oil salesman knows that he is selling a completely useless or even harmful product. He is neither naïve nor misguided. He is aware that the line that he feeds you is nothing but bull, bluff and bluster.